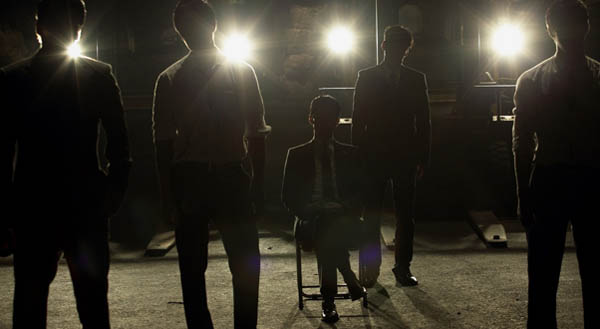 The production logos fade to black and the image of a tied up and bloody man appears on screen. Rain drenches a mysterious industrial hideout as another well-dressed criminal proceeds to beat the tied up victim with a hammer. And with that we’re back in the world of Korean thrillers. For the last decade South Korea has specialized in a specific brand of harsh genre movies that have turned the country into Asia’s current capital for hyper-violent entertainment following Hong Kong’s action movie explosion and Japan’s streak of modern horror classics. South Korea’s three top directors just spent the past year trying to break into Hollywood with Jee-woon Kim’s The Last Stand, Chan-wook Park’s Stoker, and Joon-ho Bong’s upcoming Snowpiercer. However, just because the star auteurs are dabbling with overseas opportunities doesn’t mean the country’s film industry has shut down. Nope, this week we’re being treated to Hoon-jung Park’s (who previously wrote Kim’s I Saw the Devil) epic gangster yarn New World. It’s slightly more conventional than some of the dark masterpieces to slip out of the country over the past ten years and doesn’t quite live up to Park’s clear goal of crafting a Korean Godfather. However, New World is still a damn fine piece of work that proves the South Korean industry won’t be slowing down or losing its stranglehold over international genre cinema any time soon.

A major crime boss in South Korea dies. Suddenly, there’s an opening for the thrown and the crime families battle and bicker over who will be the next one in the hot seat. The major contenders are the deceased boss’ icy business-minded number two man (Jung-jae Lee) and his hotheaded reckless buddy (Jun-min Hwang) with a taste for ultraviolence and prostitutes. There is one other element complicating things. You see, Lee is actually an undercover cop planted in the organization for 10 years who still reports to one of the few officers aware of his position (Old Boy star Min-sik Choi). Choi is not only trying to control Lee’s status in the crime world, but also has a few other secret spies in the organization who he works like pawns without any of them aware of the other’s dual life. Of course with all the confusion going on, there’s going to be violence and at least a few of these long-held undercover secrets will be revealed. Cue a series of deceptions and set pieces centered around Lee’s deep undercover cop and the moral conundrum he faces while struggling to chose what side of the law he wants to be on once all the smoke and blood stains fade away.

The aesthetic, tone, and action that Hoon-jung Park whips up in his sophomore directorial effort shoves New World directly into the line of ace Korean thrillers film geeks have come to adore over the last decade. However, what Park has whipped up isn’t the usual gritty tragic tale of vengeance (in fairness, he kind of wrote the brilliant nail-in-the-coffin for that Korean sub-genre in I Saw the Devil). Instead, this is a gangster epic more indebted to The Godfather, Infernal Affairs (or The Departed depending on you allegiance), and The Yakuza Papers than any contemporary Korean genre offering. Following the bloody opening, Park sits back for an hour to simply establish his world. It’s a complex web of criminals, cops, and undercover agents that requires time to establish and Park allows his characters and their relationships to develop slowly. Lee is delivers a morally compromised stoic center in the Michael Corleone mold, Hwang delightfully mugs as a trigger happy wildcard like Joe Pesci, while Choi represents the wary grizzled veteran he’s already trademarked, and everyone else slides into a certain type of gangster archetype. Once all the pieces are in place and the audience chooses their alliances, Park cuts loose with a blood-soaked second half filled with unexpected twists and double crosses before climaxing with a brilliantly constructed montage of strategic gangland murders ripped straight out of the end of The Godfather.

The results can be deliriously entertaining and emotionally draining, even if Park hasn’t quite reached the level of his Hollywood-bound directorial forbearers just yet. The filmmaker has admitted in interviews to adoring The Godfather more than any other movie and it’s clear New World is his attempt to launch a pulpier Korean Godfather crime saga of his own. Unfortunately, by trying to cram an epic narrative into a two hour and fifteen minute running time, he doesn’t quite reach his goals. The set up hour can be confusing with too many characters, secret identities, and twists to keep straight. When the second half arrives it plays like gangbusters with some truly remarkable action set pieces (one knife fight that stretches from a parking garage into an elevator is a particular highlight). The trouble is that we don’t quite care or even know enough about the characters for his mass-murdering climax to have the desired tragic effect. The world never feels real and the characters never come off as genuine people. It still works as a whole, just not quite as well as intended.

New World is ultimately just a slice of stylized gangster movie fun with delusions of crime epic grandeur. It’s not a new classic to stand beside contemporary Korean genre masterpieces like Old Boy, A Bittersweet Life, or Mother. However, it is an exquisitely crafted piece of entertainment with eye-popping visuals, pants-browning action, a handful of memorable performances, and a clever narrative. Park may have failed in his ambition to produce the Korean answer to The Godfather, but he did crank out the Korean answer to Michael Mann’s Heat. Considering it’s only Park’s second movie as director, that’s still quite an accomplishment. New World is definitely a must see if you’re a fan of Korean genre cinema and Hoon-jung Park is yet another talented filmmaker from that crowded industry worth keeping an eye on. I doubt Jee-woon Kim, Joon-ho Bong, and Chan-wook Park will abandon their native industry entirely to chase their Hollywood dreams anytime soon. But, it’s nice to know that if that somehow happens, there are still folks like Hoon-jung Park to keep South Korea’s remarkable genre movie streak alive.