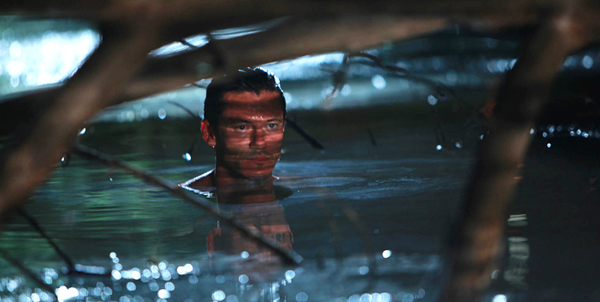 No One Lives isn’t exactly cutting edge stuff, nor is it trying to be. It’s an obvious attempt by the producers to mount a new franchise based around a silent badass killer pitched somewhere between Jason Voorhees and Ryan Gosling’s character from Drive. It’s one of those old school body count minded bloodbaths, but all in all for this type of movie it’s a lot more fun than it has really any right to be. Ryuhei Kitamura’s gleeful and knowingly silly slasher-slash-revenge thriller doesn’t reinvent the nouveau-grindhouse wheel, but it would be passable drive-in fare in any decade.

A seedy spot in the middle of a dusty lot would be the perfect place to watch this tale of a group of ruthless thieves on the run who find themselves under siege after stealing from the wrong guy: a killing machine (current Fast and Furious 6 villain Luke Evans, who is actually more of a badass here) with a kidnapped heiress in the trunk (Adelaide Clemens) that feels no remorse but can take a life in numerous different ways.

Kitamura (The Midnight Meat Train) stakes out the tongue-firmly-in-cheek high ground, seeking to exploit the witty, if somewhat braindead script for maximum entertainment value by playing everything perfectly straight. The cast understands the tone perfectly, and the film feels lovingly like a cheapie from the 80s that combines survival horror with franchise potential. (It even has an awesome final sequence set to a Regan era synth score.) There’s not much more to it than that and there doesn’t need to be. The gore effects are top notch, the one-liners are snappy, and it never overdoses on sleaze. It’s a fun film to watch with rowdy friends over beers and pizza or in a theatre full of like minded people looking for pure over-the-top escapism.

Side note: It’s the best film to come out under the WWE Films banner (with “Funkasaurus” Brodus Clay making an appearance as one of the thieves), narrowly beating out The Marine, which would make a great double bill with this one on a starry night. Since those days have passed and the film is only getting a cursory release here as part of a Cineplex sponsored series, you might want to move your TV outside for the night this one drops on DVD.