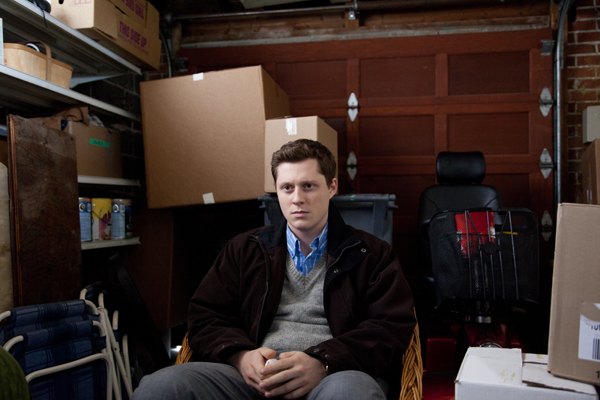 Sometimes all a movie needs is charm to be successful and the Canadian comedy Old Stock has charm in spades. It’s assuredly reminiscent of numerous American independents that have come before it (Napoleon Dynamite, Garden State, Rushmore), but it’s a pretty loving homage to that kind of cinema and style that also breaks off in its own direction thanks to some well written and acted main characters.

Sweater vest loving Stockwell Burton (Noah Reid), only a few years removed from high school, has moved into the Golden Seasons retirement home alongside his grandfather following a traumatic experience two years prior. Being too young to technically be there and in danger of never facing his future (and a vandalized bird bath) the Rascal riding Stock is forced to leave the home and move back in with his grandmother. He finds a potentially age appropriate companion in the awkward Patti (Melanie Leishman), a young woman doing community service as a dance instructor at Golden Seasons. Stock still doesn’t feel comfortable outside his cocoon, not knowing what to make of Patti, his grandfather’s late life cheating on his wife, or how to deal with a huge elephant in the room involving the girl that lives next door to him once again.

Director James Genn has a real flair for good natured comedy here, keeping things breezy and visually interesting. Dane Clark’s screenplay cribs themes and emotions from other fairly established movies of this ilk, but his dialogue (save for several fairly obvious and admittedly clichéd platitudes) rings true, allowing the leads to establish an easy rapport. Clark and Genn also aren’t afraid to make Stock look like a bit of a selfish jerk at times, and not always in an endearing way. He does things that some might think are unforgiveable or melodramatic (like trying to kill himself early on with pills that are only going to make him sick and uncomfortable), but they’re masking a deeper sadness. He also makes the argument that Stock isn’t a saint two sided by casting the wonderful Meghan Heffern as the girl next door with whom Stock shares his secret and harbours a deep and partially unfounded resentment.

Reid shines, bringing with him the charm that a character like Stock needs to succeed on screen. He’s incredibly goofy and awkward, but you would want to actually talk to him and find out what made him tick if he let you close enough. Leishman also adds a considerable amount of cuteness and good will as the one person willing to let Stock into her life with no hesitation despite knowing very little about him other than his having a good heart.

Old Stock is a pleasant afternoon at the movies, and it holds a nice place in a year where Canadian films at their best have a sense of humour rather than being dour and serious. It’s a nice trend that should continue, and one hopes that it would. It’s not perfect, but we really need more movies like Old Stock. Us Canadians like to have fun, too, you know?