We talk with veteran director and photographer Gail Harvey about her latest film Looking is the Original Sin, which opens at the Carlton in Toronto this Friday alongside an exhibition at the theatre of photography from her decades long career.

We chat with TIFF 2009 Pitch This winner, writer and director Daniel Perlmutter, about his recently wrapped comedy Big News from Grand Rock, and his film’s lengthy gestation period, why his film is a throwback to the same kinds of stories his main character is trying to make newsworthy, reuniting with one of his Pitch This mentors for his leading man, and how time flies once the film starts rolling. 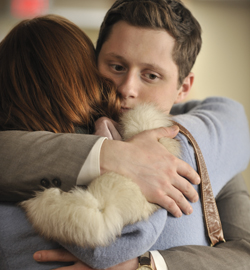 The Canadian independent teen sex comedy-drama Picture Day is like an oasis for those wanting something different than middling documentaries, slight local independent films, and overhyped blockbusters, featuring sharp writing and an excellent leading performance from Tatiana Maslany.

We talk to Canadian actor, documentarian, and unlikely celebrity (in Serbia, anyway) Rob Stewart about his autobiographical Slaughter Nick for President. He talks about what it was like to be welcomed as folk hero to many people who had nothing for playing a character on a show he never liked doing that much to begin with, and how he would never, ever take that love for granted.

The pitch-black coming of age comedy I Declare War is electrifying, terrifying, exciting, thoughtful, and undeniably entertaining to behold.

We talk to the directorial team behind the Canadian film I Declare War about recapturing the essence of playing the most epic and out of hand game of capture the flag with 12 year olds and why psychological warfare is far more damaging to kids than any bullet is likely to be.

We talk with award winning first time feature filmmaker Jason Buxton about his drama Blackbird, his research into the lives of at risk youth, his struggles to make the film with his own vision in mind, and the sometimes frustrating casting process.

Still Mine, starring beloved actor James Cromwell in what's shockingly his first major leading role, is a deeply moving and unexpectedly funny Canadian film about overcoming adversity with wide ranging appeal beyond the age of the stars involved. Check out our interview with director Michael McGowan to find out more about the film!

It’s not terribly original and it shows the signs of budgetary restrictions at many turns, but the Canadian post-apocalyptic action thriller The Colony certainly looks better and has a better cast and director than movies of this ilk usually have.

We talk to writer and director Jeff Renfroe and actor Kevin Zegers about their work on the post-Apocalyptic Canadian action thriller The Colony and what it's like to shoot such a cold looking movie in an abandoned NORAD bunker.