Orange Is the New Black is back with the fourth season streaming June 17th on Netflix. The series is awaiting — nay, taunting — you to binge through the latest drama, comedy, and conflict behind the walls of Litchfield Penitentiary.

Forget what happened last season? You can read my detailed breakdowns here, but for those of you who need a quick refresher here’s the gist of it: Piper thinks she is some kind of gangster after sending super hot Stella to Max after the Aussie stole from her panty business; Alex was right that Kubra would send someone to kill her and is literally fighting for her life in the garden shed; the maintenance crew came to fix the chicken hole in the fence, just in time for all the senior guards to walk off the job because they were getting screwed by the “man” and Caputo went all corporate on them; Morello finally got married; Judy King has come to Litchfield to self surrender; however, she’s not the only new addition with a whole bus load of prisoners arriving at the prison gates who will be occupying the newly installed bunk beds.

And so it begins, our journey into the colourful world of the fourth season of orange and black.

The King of The Castle

Orange is the new “FUCK!!” for Caputo, who’s got this sea of orange jumpers heading his way just moments after essentially declaring himself King of the Castle at Litchfield.

On any other day, this would be a mere headache for the lead guitarist of Side Boob, but half the guards walked off because of the sans benefits/limited hours fuckery.

The only guards left are the relatively doo-doo brained Baxter “Baby Face” Bayley, Erin “Psycho” Sikowtiz, and Charlie “That Rapist Guy” Coates who could all benefit from a copy of, Correctional Officing for Dummies. They could probably flip to the “How To Put On Riot Gear” section in this particular instance, given that they look like babies trying to fasten overalls.

Meanwhile, lifestyle guru Judy King is just trying to get herself checked into prison, but there’s just no one there to help her. That is until she runs into the “farts on cookies” Luschek and the two pretty much hang out until all the dust is settled.

“We’ve all eaten lead. That’s probably why half of us are in here.” — Cindy Hayes.

The Dummies get some help with some honest-to-god guards sent down from Max, and the ineptitude eyes of the Litchfield Lackeys follow these tough as nails CO’s like they were Greek gods.

And what is their mission? Retrieve inmates romping and splashing around in the literal lake, ripe with metaphorical freedom. These ladies know their bathing session wasn’t meant to last, there are no grand plans to escape, and they know their time in the sun will have an expiration date.

Love, it seems, was also not meant to last for long—at least for some. Suzanne’s new girlfriend Maureen is completely off her rocker, and wants to live in an abandoned house in the woods and eat imaginary food like the lost boys from Hook. Suzanne, with the former nickname “Crazy Eyes”,  is not exactly on the level plane of mental stability, but she’s pretty quick to decipher this lady is cray-cray.  Some of us metaphorically run away from relationships, but Suzanne literally jogs off from her would-be ladylove. 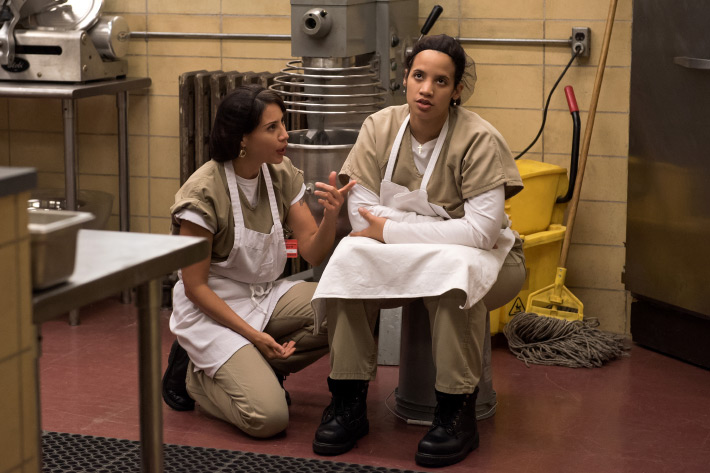 Piper’s thinks her fellow inmates are running from the formidable sight of her, due to her fantastic ability to stick her entire head up her own ass. Chang pretty well tells her as much.

Most of the inmates are wrangled up (save for the demented Maureen and Suzanne who’s on her way back to the prison) and it’s sheer bedlam. No one is allowed to return to their bunks until everyone is accounted for, and no one is able to get the same numbers.

Coates tries to help with a feminine hygiene issue by taking away Morello’s toilet paper wedding veil. She’s just trying to bask in the glory of her wedding day with her hubby’s spermies still inside her—but no, Coates has to ruin it. Why does he have to ruin everything? Does he know he ruins everything?It kind of seems like he doesn’t, given that Coates chats with Bayley and tries to explain the girl he’s been “seeing” and how he did “nothing wrong” and now she won’t talk to him. Um, as you might recall he is talking about Tiffany Doggett. He doesn’t get that he forcibly held her down and pushed his penis into her vagina without her permission? Like, he doesn’t understand that she wouldn’t like something like that?

Alex was just about to get whacked by Kubra’s lackey — who was masquerading as a brand new officer. Lolly helps her out of this jam by stomping the shit out of his neck. Dead girl porn/Cosby shots are texted from the man’s phone to Kubra at his request to confirm Alex was “killed.” That takes care of Alex’s issue of being murdered by her ex-boss, but what to do with the body?

They’re in a bit of a pickle given that, you know, they murdered a CO while in prison. They cover him up in time to go back for the count, but Alex revisits later in the evening to him to find the man still alive—if just barely. She suffocates him to death and is now just as complicit in the murder as anyone.

So what the fuck are they supposed to do? Never fear, Frieda’s here! —That octopus neck tattooed gravel voiced ex-biker chick. We don’t know much about her history, but it’s obvious she knows what to do with a body. She’s not just going to help out of the goodness of her heart though—she’ll take the keys taken off the murderer masquerading as guard thank you very much.

Papa Roach leads us into the sequence where they cut his body into pieces to be planted in the garden.  This is their last resort. ‘Cause you know, suffocation no breathing. 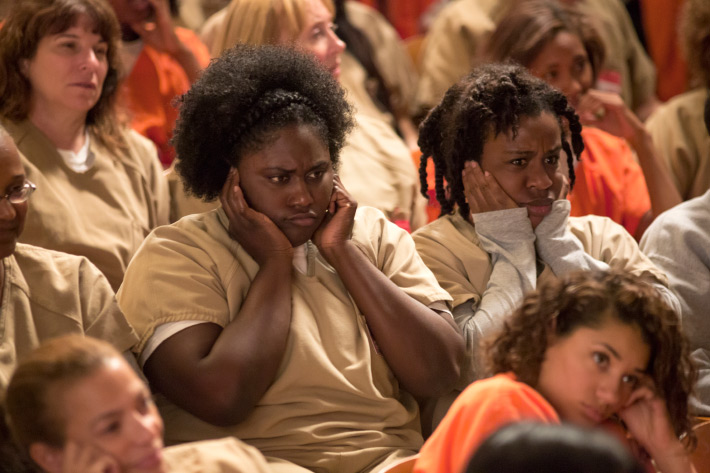 Well, Judy King’s full of surprises, huh? We might have thought it was her husband dropping her off at prison, but it was in fact her boyfriend. Socially and sexually progressive Southerners with an arsenal of lifestyle tips just might be just what Litchfield needs. Of course, she gets lost in the shuffle and of course she gets preferential treatment from Caputo and gets to sleep on an air mattress in Healy’s office.

Firstly, how amazing what it that she was almost bunked with Poussey—the look on Washington’s face was so priceless. Secondly, we all know Healy is dumb as fuck when it comes to charming female inmates, and he has a particular penchant for red heads

I wonder what kind of inappropriate emotional attachment he’ll make with King?

How long is it going to take for Caputo to start looking for his new guard?  I mean, he’s a new hire and everything but you would think someone would call him when he didn’t show up for work? Are Lolly, Alex, and Frieda actually going to get away with this?

Like Regina Spektor sings in the title sequence, we’ve got nothing but time to find out.