The racial divides between groups is not a new point of discussion for Orange Is the New Black. We saw in season two how Vee reinstituted the segregation of the black inmates in an attempt to create a powerful gang. Like sexual orientation, class, language, and culture, race is another way of either finding a group, or excluding one when it comes to the ecosystem of Litchfield (not unlike real life).

Now in season four, with the influx of inmates the makeup of the prison’s population has changed. The majority of the inmates are of Dominican descent — something that some fear or despise, and others capitalize on.

Maria Ruiz’s father had Dominican pride, so much so that he disowned his own daughter for falling in love with a Mexican man. We see Maria as a young woman with aspirations of becoming a dental hygienist enamored with a man of few words.

Fast forward year and Ruiz is alone. Her man no longer at her side dreaming about the future. Gone with her baby who she barely got to know. Ruiz, like her father, finds herself in a place where those from a similar background surround her. That shared ethnicity might be a way for her to gain power. Blanca sure thinks so.

Not everyone is banding together. Cindy’s new roommate is Muslim and doesn’t believe that Cindy “Tova” (no 5’s for v’s) Hayes could be Jewish. We know from last season that Cindy’s journey to Judaism started with the quest for crunchy broccoli—but then transformed into a journey to find her people. “Like you were born in Karachi” Cindy retorts.

Judy King isn’t racist; she just hates fatties, Nebraskans, and anyone with too much hair. Healy sets her up with Yoga Jones (for me, forever Patty Mayonnaise) as her bunkmate—pretty much the most unthreatening white woman the prison has to offer. Yoga isn’t too happy about being in the 1% given that she and King get a cushy cell all to themselves. No doubt Jones would rather be back in gen pop giving the newbies her mandala speech. But after the King tells her to shut up and say thank you (which is of course technically impossible) Jones sips tea from the cup of the privileged few.

After rival inmates push Flores down the stairs, Ruiz has had just about enough. She decides to take a note out of her father’s book and lead her group with pride, and criminal savvy. Let’s not forget Ruiz has been through some shit, and when backed into a corner, there’s no telling what she’s going to do. Piper might be walking around calling herself a gangster with an “a”, but Maria Ruiz has actually seen how a king pin operates.

There’s a new boss in town and his name is Piscatella and he calls Cindy “puffy head” and uses an air horn to get everyone’s attention. CO Air Horn walks the inmates through mindful breathing exercises and passes out earplugs. Two of the cheapest options for keeping the peace in the overcrowded prison.

This way of saving on expenditures might be a route to love. At the corporate offices Linda From Purchasing’s wide-eyed cost effective jargon seems to get Caputo a little hot and visa versa.

In order to solve the whole not enough guards situation whilst saving money, the team at MCC decide to hire Veterans for the tax credit they would ensure. Never mind the United States of America has a terrible track record for providing the adequate mental health care many of the returning soldiers so desperately need. As the dough faced executives put it, these new hires might be, “trigger happy.” But that doesn’t avert their eyes from the oh-so-tempting bottom line. They incentivize the program by offering free housing for the new guards. The homes are going to be fixed up from the free labour of the inmates.

As you might recall, these homes are waiting—if not in slight disrepair—just in the woods outside the prison, one of which is the would-be love nest of Maureen and Suzanne.

Poor Suzanne, all she wants to do is to find a soul mate that’s not “gingerbread in the head.” She might just have to wait for her time with the perfect partner.

She’s not the only one unlucky in love. Pennsatucky got out of her job as the prison van driver by faking a seizure so that Coates would stop raping her. She worries her replacement, Ramos, will get assaulted too and she speaks to her in code: Has she seen the “ducks”? Or been to the “pond”? What about “ice cream”? Obviously given Ramos’ chipper demeanor and belief Penn must have some kind of brain injury, she’s hasn’t been assaulted—yet.

Red’s unassuming roommate with the large uvula is driving her crazy and depriving her of sleep with her incessant snoring. Red puts sardine packages on the poor woman’s back so she can’t turn in her sleep, but she ends up falling off the top bunk and breaking her nose. Red’s doesn’t take her to medical though—she takes this chance to sleep like a baby.

Speaking of babies, Daya Diaz just may have lost hers forever. Daya wanted to give the baby to Pornstache’s mom to give her a life of organic food and French lessons. Her mother Aleida’s meddling—sending the baby to live with Cesar—at first was made Daya happy to know her baby would be with family; however, Cesar was arrested and the baby swallowed up by the system.

Aleida is surprisingly kind of a Pollyanna about Cesar’s prospects, that is until she finds out he’ll be an old man before he gets out of prison and breaks down sobbing.

There are more that seem doomed to be sent away for a long time:  Where is Sophia Burset? After Gloria tells her son to go to Michael and tell her Burset’s in the SHU even though she didn’t do anything wrong, Crystal Burset shows up and tries to shame Caputo. Crystal catches him walking out of the prison in his new $1100 suit (COME ON!), but her pleading is to no avail. 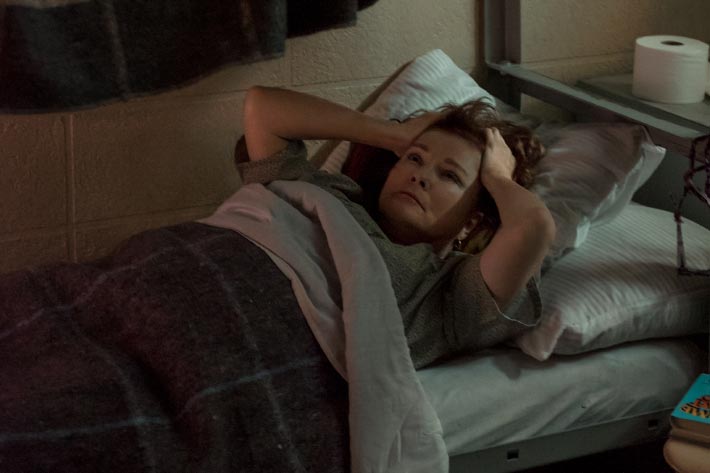 Seriously, has no one noticed there’s a guard missing? I mean I understand that there were a lot of people who walked off the job in one day, but I mean has no one looked into the fact that a brand new hire just disappeared? I guess Caputo is too busy making googly eyes at Linda From Purchasing and buying fancy new clothes.

Morello’s love is always so pure. One can’t help but smile at her unabashed affection for her new hubby. Unless you’re Alex of course. I mean, Vauss does have some bigger things on her mind, you know, like the murder she just committed, but she could be a little nicer to the newly wed. When she does try it’s such a sad and funny moment that Morello doesn’t know what her husband’s favourite colour is. What does she even know about him?

Speaking of love: Soso and Poussey forever! Seriously, be still my beating heart.