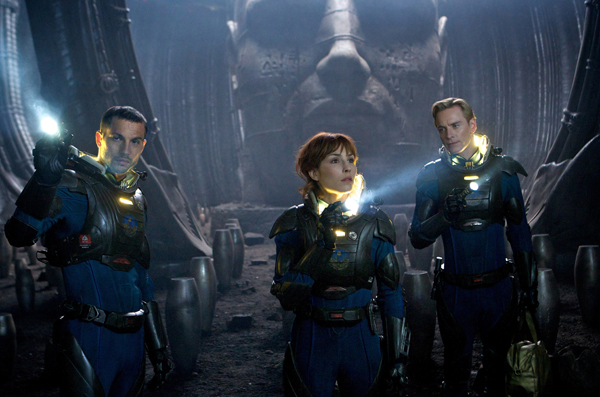 Promethus, the long awaited prequel-cum-reboot to the Alien franchise Ridley Scott, Dan O’Bannon, and H.R. Geiger spawned back in 1979, isn’t so much awful as it is inherently frustrating to watch. Scott returns to the director’s chair and Geiger’s vision remains intact, but with different and wholly ill equipped writers this time out, this film dated roughly a century before the original would have worked so much better if it didn’t try to have any connection to the Alien films to start with. Instead, what the audience is left with is a mildly interesting meditation on the nature of man, God, the universe, and evolutionary theory that feels nuanced in terms of visual acuity, but plays like it was written by an ADD addled philosophy major on a Ritalin binge.

Following a stunning looking and wholly pretentious opening sequence meditating on the point where nature, science, and God meet, the audience is introduced to Charlie Holloway (Logan Marshall-Green) and Elizabeth Shaw (Noomi Rapace), a pair of palaeontologists in 2093 who have discovered a common thread in cave paintings around the globe that leads them to think there is a higher power that created the entire human race lying in distant star system. The trillion dollar mission funded by the Weyland Corporation leads them and a ship full of scientists, tech experts, and workers aboard the titular ship to the moon of planet LV-223, a deeply inhospitable place capable of sustaining life only in a series of underground caves.

Without giving too much away in the plot department, things do go horribly awry and terrible things begin to happen to the ship’s crew, with the exception of the ship’s captain (Charlize Theron) who never gets off the boat, and a curious android named David (Michael Fassbender) who clearly has motives he isn’t telling his fellow crew members. Aside from David, Charlie, and Elizabeth, writers Jon Spaihts (The Darkest Hour) and Damon Lindelof (Lost) have no interest in developing any of the characters in the film and even the three mentioned can be summed up with one word each. There’s a sceptic, a believer, and a liar. Everyone else is simply cannon fodder for when the real shit goes down.

The characters are purposefully bland, however, because Spaihts, Lindelof, and Scott simply can’t let the movie be what it is. The reason Alien worked so well was because it was a sparse film with a great deal of blank space to allow the viewer to make up their own conclusions about the underlying thematic material –  namely man’s place in the galactic food chain. Prometheus is blunt force trauma, big budget filmmaking that thinks it’s an esoteric art film. In many ways, it’s a lot like Lindelof’s work on Lost in that Prometheus throws around a lot of interesting concepts, but it doesn’t care to answer any of them in a coherent fashion. There’s a very simple and somewhat thoughtful throughline here that gets lost because the writers feel it isn’t enough. It all leads up to an eventual final twist that feels curiously out of left field, but still lacks any real emotional weight.

All of this would be excusable if the whole enterprise didn’t reek of an effort to desperately reboot the Alien franchise. It just doesn’t fit since Scott has become so much more of a production design oriented director that the bombast of this film could never have taken place in the universe of the original Alien, especially 100 years prior. The also FAR too drawn out conclusion speaks to what might have been a lot of back and forth between the filmmakers and the studio because it finally does try to become an Alien film and it feels forcibly grafted onto the movie rather than organic, and the ludicrous final shot and accompanying voice over make the entire thing feel like a cash grab.

Having said all of that, Rapace and Fassbender do some great work in their roles especially in the film’s second half when the body horror elements begin to mix with its more philosophical leanings. They, along with Idris Elba as the gruff pilot of the Prometheus, save the film from devolving into heavy handed and bludgeoning symbolism every five seconds. Also, the first 45 minutes or so are genuinely good, bolstered by Scott once again learning how to telegraph an impending sense of dread, but that high wears off quickly once it becomes apparent that the story is just spinning its wheels to get to the conclusion and eventual sequel set-up.

The film’s 3D aspect actually sums up the movie nicely. It looks positively amazing and damned near flawless. It’s bright, colourful, and competently transferred. However, it adds and detracts nothing, working almost entirely like a null set since the filmmakers never do anything even remotely exciting with it. The 3D, much like the movie, is just kind of there. And that’s frustrating. There’s a point where Theron’s character tries to explain the gravity of their situation to Elba’s character in the most complicated and convoluted way possible, to which he pauses and simply replies with “I don’t care.” I feel you, buddy. I really do.