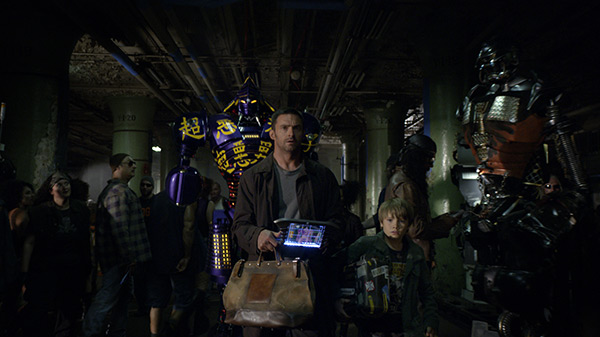 Former number one boxing contender Charlie Kenton (Hugh Jackman) has been forced into being a drunken washout by a new reality in which fighting robots have replaced the gladiators at the heart of “the sweet science.” The robots can literally tear each other limb from limb, giving the audience exactly the sort of total annihilation that they have been craving. Much like the current state of mixed martial arts, the robot boxing scene has a premiere league that acts as the face of the sport and numerous con artists and hustlers (like Charlie) who toil away in seedy underground clubs with connections to organized crime.

Upon learning about the death of his ex-wife, Charlie is forced to deal with the resurfacing of the 11-year-old son he abandoned years earlier (Dakota Goyo). After striking a deal with his aunt (played by Hope Davis in a very small role) for cash so she can go on a trip to Europe with her wrinkly husband (veteran actor James Rebhorn), Charlie agrees to watch over the boy until the end of the summer. One night while Charlie is breaking into a scrap yard to scavenge for parts to repair his myriad of busted robots, his son stumbles upon a beaten up sparring robot named Atom. Seeing an money making opportunity in the sparring bot that his father is blind to (a sparring bot already knows different punch combinations and it’s designed to take a great deal of punishment), the boy forces his father into getting his new toy some actual fights.

This is nothing more than the boxing robot film that it appears to be on paper, but that should be taken in the best way possible. The fights on display in the film are full of energy and life. Best of all, unlike the Transformers films, the robots can actually be seen in full detail for more than just a few seconds at a time. It seems like a lot of time and effort went into actually plotting out how the robots would mimic the actions of a human fighter.

While it would be easy to write the film off as a mish-mash of genre clichés (which it absolutely is) or a filmed adaptation of Rock ‘Em Sock ‘Em Robots (which it isn’t since it is based on a Richard Matheson short story), Levy actually bothers to explain the world that these characters inhabit. The actions and reactions the robots and humans have real consequences for the story regardless of how ludicrous they sound or appear. Real Steel aims to give the audience a satisfyingly good time instead of a film full of empty calories, but at 127 minutes it is a tad longer than it needs to be.

The focus is primarily on the robots, but Jackman and Goyo make a very likable father and son duo, with Jackman himself simply doing the same sort of tortured tough guy routine that he pulls in the X-Men franchise. The film also boasts some good supporting performances from Anthony Mackie (as a sympathetic bookie and fight promoter), Kevin Durand (as a not so sympathetic bookie and fight promoter), and Karl Yune and Olga Fonda as the team behind the current World Robot Boxing League champion, who prove exactly the kind of villains this kind of film needs to have. If they had swivel chairs to sit in they would turn around every time they were on screen to calmly explain their plans to destroy the hopes of the heroes.

While the film bears the standard fingerprints of producer Steven Spielberg (sentimental father son relationship, good tech vs. bad tech, know-it-all kids) and it’s nothing more than multiplex blockbuster fodder, it lacks the cynicism that taints so many glossy assembly line products. Real Steel is a movie that could have been made by robots, but instead was made by people who use the machine well enough to inject a great deal of fun and heart into the equation. While it isn’t nearly as good, it is the best film about giant robots since The Iron Giant. If Brad Bird’s animated classic is the heavyweight champion, this is at least the middleweight champ.