The Ides of March Review - That Shelf Skip to main content 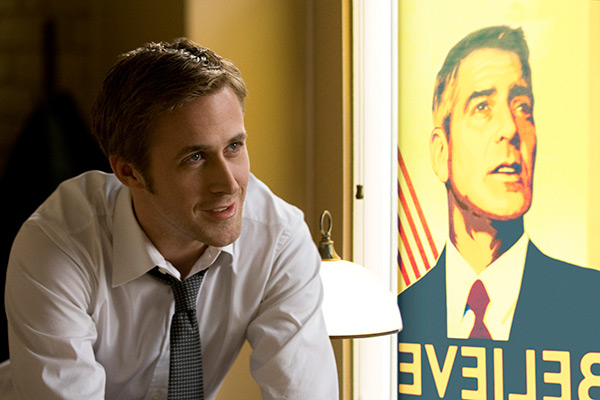 With his latest film, The Ides of March, George Clooney reasserts himself as one of the best actor-directors working today. As a throwback to the political potboilers of the 1970s and 80s, Ides doesn’t break any terribly new ground, but much like Clooney’s previous directorial efforts (Good Night and Good Luck, Confessions of a Dangerous Mind, and the admittedly lacklustre Leatherheads) it is a solidly constructed and tightly paced film with great performances from an all star cast.

Ryan Gosling delivers his third excellent performance this year (hot on the heels of Drive and his scene stealing comedic turn in Crazy, Stupid, Love.) as Stephen Meyers, a young hot shot political advisor who is the second highest ranking campaigner in the camp of Democratic presidential hopeful Mike Morris (Clooney). Despite being swayed by the opposing camp’s management (led by Paul Giamatti) and being constantly pressured for stories by a persistent journalist (Marissa Tomei), Meyers is an eternal idealist who truly believes that Morris is behind the best campaign he has ever been a part of.

Meyers begins to become conflicted about the campaign when an intern that he has feelings for (Evan Rachel Wood) turns out to be at the heart of a scandal that could spell career suicide for his employer. Meyers is torn between doing what is in his best professional interests, what he believes is best for his country, and what he knows in his heart to be the right thing to do.

The biggest appeal of the film is watching a great cast play around in the actor-friendly sandbox that Clooney has created for them. Gosling looks the part of a true believer, and he plays Meyers as a perfectly conflicted young professional who grows too jaded to care on a global level and too impulsive to be impartial on a personal level. Wood is also excellent as the girl with more than a few secrets, and her performance is the one that the Academy should probably pay the most attention to when awards season rolls around. Giamatti, Tomei, and Phillip Seymour Hoffman (as Gosling’s boss) are all hired based on the fact that there aren’t three actors better in Hollywood for playing characters the audience rightfully needs to feel conflicted about. And yes, Clooney himself is great, putting in his own wealth of charm to be both inviting and wary to viewers at the same time. In short, he is playing a consummate politician.

The script, from Clooney and his Good Night and Good Luck writing partner Grant Heslov, contains some very genuine moments of political and personal drama that are the hallmarks of this particular style of filmmaking. But while the scandal at the heart of the film is a bit of a shock, it does contain a few plotholes that the story doesn’t explain very well. The cast plays along with it very well, but it does stumble a little bit. Thankfully, the pacing of the film never lets up long enough for most of the audience to realize that this particular conspiracy can be brought down with a single phone call.

Clooney has a way with actors that is almost unparalleled among directors. It probably helps that he is quite good at what he does at his day job that he can effortlessly lead almost any team into battle. The Ides of March is a bit slight, but that isn’t a slight against it. It’s a simply made film designed to be a great night out at the movies. It is a film about politics with no pretension other than to be as entertaining as possible. In that regard, it is one of the biggest successes of the year.