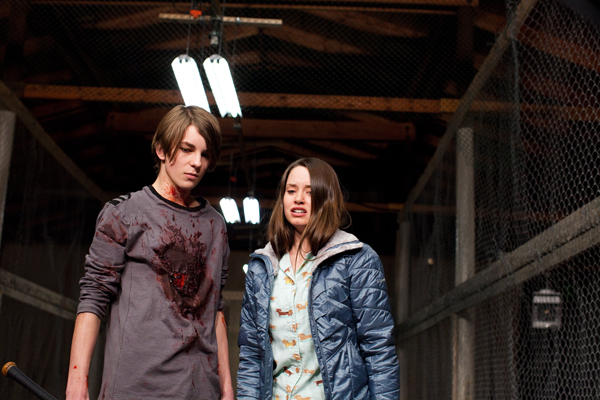 The Canadian dark comedy Rufus is one or two rewrites away from being something truly special. The intention to create something new out of current vampire mythology is certainly evident, but in its current form its more of a glorious mess than anything else. Buried beneath an ill advised manic-pixie-dream-girl romantic tale is an intriguing North of the Border take on George A. Romero’s Martin done by way of Twin Peaks era David Lynch and Edward Scissorhands era Tim Burton. Sadly, the film constantly finds ways to shoot itself in the foot by cramming in far too many contemporary touches that end up making less sense than the weird and outlandish story elements.

Rory J. Saper (in his big screen debut) plays the titular teenager: a centuries old British accented vampire who has just watched his last remaining companion commit suicide in front of him. Stranded in the middle of the snowy prairie town of Conrad, Rufus is taken in by the local sheriff (David James Elliot) and his wife (Kelly Rowan), who are both still overcoming the loss of their own son. It’s hard for Rufus to fit in, what with the need to drink human blood and all, but he does start a meet-cute relationship with Tracy (Merritt Patterson), the damaged goods girl from across the street who has “screwed half the town” by her own estimation. He runs afoul of and starts an uneasy friendship with Tracy’s jock ex-boyfriend Clay (The Killing’s Richard Harmon), but his biggest threat might be the arrival of a sort-of bounty hunter (Kim Coates) who has tracked Rufus to bring him back to the medical testing lab he escaped from.

In the opening ten minutes of writer-director Dave Schultz film there’s the set up for a really interesting story of identity being told in a refreshingly bizarre manner, and for the first hour or so there are sparks that suggest the movie could roar back to life at any moment. The idea of Rufus – played quite nicely by Saper as a creature who never quite learned how to trust, but still retains a degree of humanity – trying to insert himself into a family and learn how to be cared for is a great idea. Unfortunately for the film, the absolutely ludicrous and kind of slut-shaming romantic subplot never gets eased into and the film suffers severe tonal whiplash in near record time.

The first time Rufus and Tracy meet she finds him climbing trees and she comes to meet him on the snowy street in pyjamas and bunny slippers. Two minutes later they are in her house and she’s pretty much forcing him to take off his clothes. It makes less than zero sense and makes her character into somewhat of a joke. It only gets worse when Clay tries to kidnap and rape Tracy in front of her, only for it to all be forgiven by Rufus within days because Clay starts to show him some friendship. Then the film goes further down the rabbit hole of implausibility by making Clay a closeted homosexual who also has the hots for Rufus and sparking one of the most ill advised love triangles ever recorded. Even worse than that, the film dreadfully states that the reason Tracy might be so screwed up is because she had an abortion. It’s such dreadful and backwards thinking that the film starts to feel depressing as a result, and not in a narratively effective sort of way. It’s exploitative and lazy shorthand for real problems and issues.

Aside from just how terribly the film writes its female characters (even the mother is a shrill and uncaring archetype of paternal loss until the end) and how uncomfortably sleazy everything involving Clay and Tracy really is (despite being played by a pair of capable actors), what’s worse about the whole affair is how entirely unnecessary the romantic angle of the story is. Maybe if the idea had been work shopped a bit better so as to not make everything feel tacked on, it could have worked, but the real heart of the film is Rufus trying to find a family, not trying to find love. Elliot and Saper have great chemistry together, and watching the two of them bond gives the film its most tender and fully realized moments. Even if Schultz doesn’t fully have a grasp on how to make a love story, at least he understands familial dynamics.

Aside from the performances (including Coates’ understated and level headed villain), Rufus also boasts a pretty great soundtrack from Erland & The Carnival and some gorgeous cinematography and staging from Craig Wrobleski. They’re elements that are so great it’s easy to wish they were put in service of a better story.

Rufus kind of bears the marks of a film that was somewhat rushed into production without being fully ready to be filmed. Clearly at one point made expressly for television with how scenes end out of nowhere and should have commercial breaks after them before going to an unrelated sequence, it just feels tonally off kilter. And yet, Schultz was undeniably onto something, which makes the film all the more frustrating in its ultimate failure to achieve anything of substance.