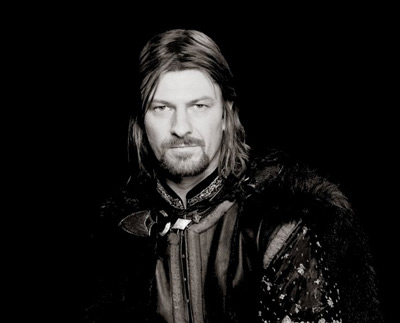 The Hollywood Reporter has some big casting news for HBO‘s television adaptation of George R. R. Martin‘s Game of Thrones fantasy series.  Sean Bean has been cast as Lord Eddard Stark, one of the main characters from the book.  Bean, whose resume is quite long, is recognizable to many as Boromir from Lord of the Rings.  He has also appeared in Goldeneye, Ronin and the Sharpe television series, to name a few.  Bean joins fellow English actor Mark Addy, who will play King Robert Baratheon, as well as Peter Dinklage who has been cast as Tyrion Lannister.

If none of these character names are familiar to you, I recommend you check out George R. R. Martin’s books.  HBO has been pitching the show as Lord of the Rings meets The Sopranos, but that would be doing the novels a disservice.  This isn’t elves and magic swords; this is sex, violence, war and political intrigue fantasy.  Perfect for HBO.  Thrones will have more in common with a show like Rome than Rings or The Sopranos.

The novels are an amazingly fun read, I’ve never been a huge fantasy fan and I couldn’t put them down.  Game of Thrones has always been more about the people and politics than the minutiae of fairies and dragons that other high fantasy get so wrapped up in.

Production of Thrones is being headed by some very talented guys.  Actor and director Thomas McCarthy who directed the award winning Station Agent and last year’s The Visitor will be directing the Thrones pilot.  David Benioff whose credits include writing 25th Hour and The Kite Runner has written the pilot and will be developing the show.  The production starts filming in October and is due out the end of next year.  I can’t wait to hear the next round of cast announcements.

Winter is Coming, a Game of Thrones blog devoted to following all the latest news from the series reported the Bean casting rumour last week.  They’ve got some well placed sources close to the production, keep checking there and of course here for all the latest news on Thrones.