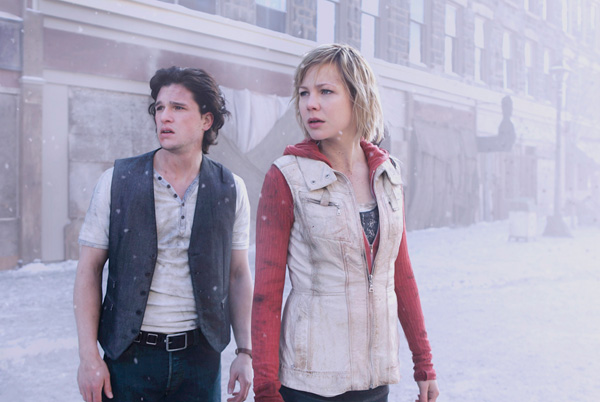 Let me be very clear up front. Until the release of Bucky Larson: Born to be a Star, the first Silent Hill was my most hated film of all time. I loved the games and while I appreciated the visual style of the film to a degree, it was nothing more that an overlong wank job made by people who thought the game looked cool, but had absolutely no sense of how to create a compelling or even remotely coherent story. If you told me that there was going to be a sequel to it as I left the theatre on that infamous day – one of the few days where I considered walking out of a film I was being paid to sit there and watch and simply throwing away a paycheque because I couldn’t make it to the end – I would have told you to simply stick bamboo shoots under and into every part of my body where they would be the most painful. I hated it that much. I still hate it that much.

Maybe it was because I had such absolute rock bottom expectations for the often delayed and sadly inevitable sequel Silent Hill: Revelation that I didn’t end up abhorring it as much as I did the first film. People who knew my hatred of the first film were shocked to hear it and largely thing I was wrong in not turning into a human atomic bomb as soon as the movie ended. They all told me this one was way worse than the first one, but honestly this one is just awful as opposed to being one of the worst things ever made, so in that respect, yes, Silent Hill: Revelation is a step up. The filmmakers still can’t make the chip shot of adapting Konami’s stellar survival horror and puzzle games to the big screen, but this time out the artistic posturing and pandering that killed the first movie is completely replaced by just not giving a shit.

Set years after the events of the first film and even taking its sweet time explaining what happened in the gap between the two, Harry Da Silva (Sean Bean) has spent most of the time since losing his wife (Radha Mitchell, returning for all of five minutes to do nothing more than explain just what the heck happened at the end of the first film) moving from place to place to stay ahead of the cult that wants to reclaim his daughter Heather (Adelaide Clemens) and bring her back to the ghost town of Silent Hill to sacrifice her and free themselves from the bonds set upon them by the witch Alessa, who gave the only good part of her soul to Heather as a child.

What’s that you say? Heather never made it out of Silent Hill at the end of the first film? True! But apparently there was half of an amulet that allowed one of them to pass through, which we see at the end of Mitchell’s exposition dump while Bean cradles a child that looks totally different than the one in the first film on a set that is nothing at all like anything that remotely existed in the first entry. It’s at this point – about 20 minutes into the film after we’re explained how Harry killed a man and how Heather never makes friends from moving and changing names all the time – that writer and director Michael J. Bassett has simply thrown the convoluted nature of its predecessor to the wind in an effort to just create a film that’s weird for the sake of being weird with a plot that can’t be analyzed for a single second or the whole thing will fall apart. I guess the holes are better than trying to interpret utter nonsense.

Anyway, Harry gets kidnapped by the cult leader (an almost unrecognizable Carrie Anne Moss, giving the only good performance in the film) and brought to Silent Hill from the real world in an effort to flush Heather out. What’s that you say? The people of Silent Hill can’t escape the town and into the real world? Again, not true, because the movie just kind of shrugs and says “Yeah, well some of them can.” Together with a helpful fellow new kid that quite obviously works for the order, but he’s, like, you know, good and stuff (Kit Harington), the two go on a rescue mission through the lower budget equivalent of the first town.

There’s no short of twisted imagination on display here, especially in the make-up and 3D visual effects department, but the cut rate budget shows through at every turn. It might be easier to follow than the first film, but the visuals still take a step back. The town barely gets glimpsed at all since the constantly falling ash obscures everything so the audience can’t tell they couldn’t afford to digitally recreate an entire place this time out. There’s a cool monster made out of mannequin parts and a suitably creepy birthday party in a mall food court, but the sense here seems to be to just make everything louder and more obscured so people will think there’s mystery and doom when in reality there’s no remote reason to care about a single thing that’s happening on screen.

Adding the final nail in the film’s artfully constructed coffin are some of the most miscast leads and least caring actors delivering asinine dialogue in recent memory. Moss knows exactly what kind of movie she’s in, and I guess Bean does, too, but his almost open disdain for what he has to do here bleeds through in almost all of his scenes. He’s doing the bare minimum. Malcolm McDowell continues the “I’ll do anything for a paycheque” portion of his career as a chained up cult elder who hams it up for 3 minutes and is never heard from again. I like to think that the filmmakers had to keep him chained down because he could see the cheque waiting for him off screen and he was desperately trying to make a run for it.

But nothing compares to how much Clemens and Harington are in over their heads. Together they seem like they just wandered off the set of a WB teen drama instead of being in a psychological horror film. Clemens has a few fleeting moments that approach something close to being a performance, but there’s nothing she can do to make any of this work and her director casts her hopelessly adrift. That’s nothing compared to Harington, who simply can not act here. He’s so intensely awful and awkward it’s astounding that no one ever once pulled him aside to talk to him about how to not say every line like he was a cut rate James Dean. It’s laughable in all the worst possible ways.

Eventually Revelation becomes just as nonsensical as its predecessor, but it takes longer to get there and doesn’t stay there long enough to dwell on how avant garde it is. Unlike the first film, which was just a bad movie, Revelation finally hits upon why Silent Hill just doesn’t translate to the big screen as well. Unless you are actually playing through and interacting with these hospitals full of sexy, deformed nurses or amusement parks with killer rabbits and dudes in gas masks, there’s absolutely no emotional investment tied to anything that happens. It’s all visual splendour here that’s designed to creep people out in only the most basic of ways without giving the audience a reason to be scared. The stakes are completely removed in place of plotting so convenient that it’s impossible to care about an perceived complexity.

Maybe it is worse than the first film, and maybe it sounds like I’m angry that there still isn’t a good Silent Hill film. I’m just not as angry as I was following the first outing. It’s still dreadful and not worth anyone’s time, but I just can’t be given a reason to care as much about that anger since the movie can’t be bothered to even care for itself. Thanks for being so lazy Silent Hill: Revelation. Now I can go on continuing to ignore your existence like it was all just a terrible dream.

Oh, wait, no, I can’t, because it ends with yet another sequel set up. Maybe I can find someone willing to take that bullet for me next time. Somehow I doubt it.