Conceived as a love letter to gooey 80s body horror (especially the work of everyone’s favourite Canadian pervert David Cronenberg), James Gunn’s Slither is one of those rare projects that was designed to be a cult film and actually became one. Like all horror/comedies, it failed at the box office. However, Slither also debuted to shockingly good reviews for a horror flick and quickly wormed it’s way into every gore-loving sicko’s heart. It helped launch the career of the man who would go on to rule the Guardians Of The Galaxy and remains a fan favourite amongst his work. The flick has also been mysteriously out-of-print on Blu-ray for years, but thankfully the good folks at Shout! Factory went ahead and fixed that.

Like all good stories, Slither begins with a meteorite crashing to earth containing an alien parasite. You know, that old chestnut. It happens near a small Southern town for added accents and humour. A sleazy Michael Rooker (is there any other kind?) is soon infected and slowly transforms into a tentacled slug monster. That doesn’t work out well for his wife Elizabeth Banks in what slowly evolves into an oddly emotionally truthful tale of a marriage breaking down when people change (in this case that change just happens to be a perverse tentacle monster mutation). Fortunately, Nathan Fillion is around as a charming police chief to help solve the crime and save the girl.

Eleven years later, it’s kind of amazing that Universal Studios financed a horror movie this downright insane. Granted, the flick eventually turns into a zombie movie of sorts and Gunn had just helped the studio score a big hit by writing the Dawn Of The Dead remake. But even so the movie is so gross and gooey and openly perverse that it feels more like the sort of thing that Gunn’s alma mater Troma might deliver. It’s likely due to the fact that Gunn was a hot screenwriter at the time and Slither is uncommonly well written for a mainstream horror genre. The one thing the film shares with Guardians Of The Galaxy is Gunn’s love of outsider characters. Everyone in the film is in some way sympathetic and hilarious, even Rooker’s rapey cannibalistic alien slug monster. There’s an uncommon empathy for all the characters and they are so well drawn in the script and perfectly cast that you can’t help but love these people… even as they battle increasingly preposterous odds with slime pouring out of every orifice.

As for why Slither endures as a cult film? That’s likely because it’s a horror flick for horror fans. It does everything well. The scares work, the gore is unrelenting (yet always playfully disgusting). The effects are also quite impressive with CGI that holds up far better than many films of the era with ten times the budget. The jokes work without diluting the scares or atmosphere. It’s somehow a gross out bodycount monster romp and a film that captures the weird romanticism and tragedy of the classic Universal Monsters. It’s a rare mainstream horror movie that gets everything right and manages to inch its many influences into original areas. Sadly, Slither was too weird to be a hit at the time but thankfully the movie was just weird enough to endure. Plus that James Gunn guy’s career turned out just fine despite the box office thud of his directorial debut. So that’s a plus. 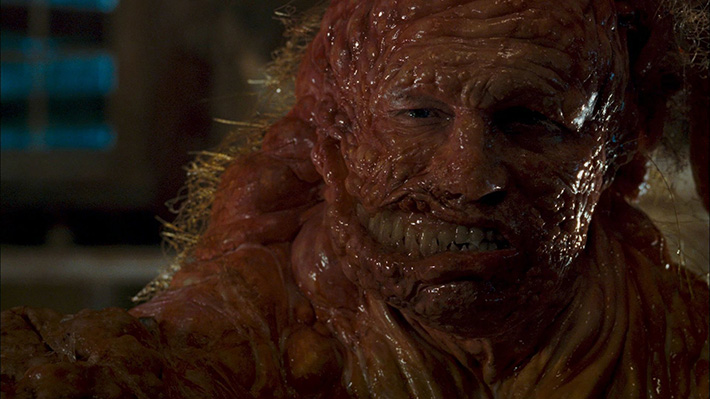 Previously only available on a Canadian Blu-ray that went out of print almost instantly and sold for impossible prices on ebay, it’s such a pleasant surprise to finally see Slither handled so well on Blu-ray. The transfer is gorgeous, with vibrant colors, inky blacks, and rich detail in each and every disgusting frame. The lossless soundmix packs a punch with the score and icky sound effects filling home theaters to make you squirm. The film likely didn’t look or sound this good in it’s theatrical presentation. Thank god the 2006 CG was strong because that really could have dated the movie in it’s proper HD debut. The animation was beautiful though, so this flick looks amazing on Blu just waiting to be discovered by new fans looking for an excuse to giggle and gag.

Released during the peak of DVD sales and gratuitous special editions, the original Slither disc was packed with features ranging from a delightful commentary from Gunn/Fillion to a video diary from Troma frontman Lloyd Kaufman documenting his cameo. It was an eccentric collection of special features clearly curated by a movie nut director to fit in his collection. It’s all been ported over to this disc and would provide more than enough content to make this a satisfying release if Shout had decided not to produce any more features. However, that’s just not how Shout Factory works, now is it?

So, we are treated to a few new features to top up the Slither Blu-ray. First comes a delightfully motor-mouthed 30-minute interview from James Gunn. He talks up everything from his Cronenberg and classic Universal monster movie influences to sneaking the Slither slug into Guardians and the day he discovered horror/comedies make no money and panicked. It’s a good time for those who love the director. Next up, character actor Greg Henry pops up for a brief 8-minute chat next, tossing out some fun anecdotes about fans quoting lines back to him and the delicious mint-flavour of the fake arm he chowed down on in the flick. Finally, Gunn, Nathan Fillion, and the great Michael Rooker recorded a new commentary track that’s almost as fun as the feature, ruthlessly mocking Rooker throughout, slyly acknowledging Gunn’s personal perversions, and proving above all else that these real life friends love Slither even more than any fan. It’s a treat as is this disc as a whole.

Shout! Factory have done an amazing job at becoming the Criterion Collection of horror and cult movies over the last few years. This disc is one of their best and proves that they are willing to anoint contemporary movies as cult classics along with their famous back catalogue. No 2000s horror movie deserved that  love more than Slither and it’s nice to see this downright nutty horror comedy join the Shout catalogue to stand alongside so many of the classic flicks that influenced it. Plus you get to see that weird inflated nipple body prosthetic in HD. What a time to be alive!