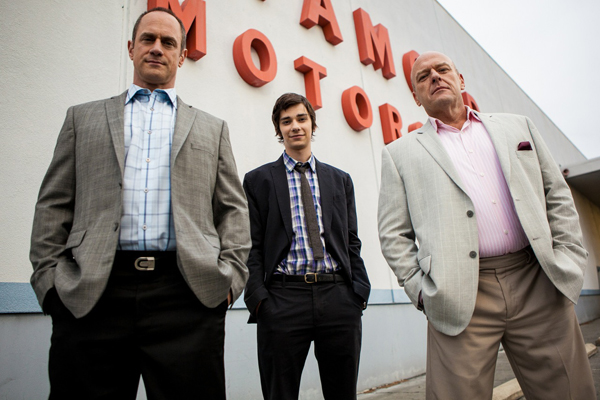 Small Time is by no means a perfect film, but it gives enough of a fresh spin on a traditional sort of coming of age story thanks to some excellent performances from some consistently underrated actors.

Al Klein (Christopher Meloni) and his good buddy Ash Martini (Dean Norris) have been long time partners in a used car lot.  These two guys are the best of the best and they know every trick in the book when it comes to getting you into an automobile.  Ash is a carefree kind of guy who never settled down, but Al still pines for the ex-wife Barbara (Bridget Moynahan) who left him years ago for someone a little more stable and successful.  When their son Freddy (Devon Bostwick) graduates high school, rather than go to college he decides that he wants to sell cars with his old man.  At first Al is thrilled to have Freddy move in with him as it’s been the first time since Freddy was a kid, but Barbara is decidedly less excited.  Al quickly learns that what might be best for him probably isn’t the best for Freddy. He watches Freddy transform from a innocent young kid to a seasoned pro salesman, leaving Klein with a tough choice to make.

We don’t often get the coming of age story, empty nest tale from the male perspective looking in from the outside, but Small Time is a heartfelt and often funny film that tackles some of these issues in a fairly entertaining way; enough so that it makes up for any hiccups and bumps in the road along the narrative.

In his feature film debut, TV veteran Joel Sernow puts together a solid enough film that takes place at some point at an indeterminate past moment in our narrator’s (Freddy) life.  It’s got a good flow and enough production design value to make it feel like a slice of the past. While grounding the story in a specific time period would have helped for clarity sake, it doesn’t hinder anything in the story itself.  The dialogue is crisp, and the script doesn’t resort to any cheap theatrics.

If there is one major thing to complain about, it’s that the story never really generates any stakes despite having well rounded characters.  It’s almost too steady and safe. There’s some legitimate charm to it but when it tries to create tension, it just feels forced, playing more like an awkward family dramadey, rather than having to deal with any genuinely serious issues, but those lapses are where the excellent cast takes over and saves the film’s blander moments.

Meloni has shown for years the stalwart ability to be a leading man and it’s astounding he isn’t used as such more often.  As Al he manages that delicate balance between a touch of salesman smarm and charm that makes him the kind of character you can like both when he chasing the woman of his dreams or when telling bawdy jokes at the deli with his buddies.  Coming off the smash success of Breaking Bad, Norris’ Ash makes a perfect counter balance as both these men have each other’s back both on and off of the car lot despite their differences.  Canada’s Bostick acquits himself admirably, however the balance of the rest of the ensemble just didn’t have a ton to do. Moynahan always far too much of a background character to make an impact. For some reason Garcelle Beauvais was there to be Klein’s girlfriend with little major payoff, and Xander Berkeley is wasted most of all as Moynahan’s new husband.

Still, Small Time works as a decent bit of counter programming for people already sick of big budget blockbusters before the summer even begins.  It’s fresh & solid in all the places that matter and its main goal is to make audiences smile. In that respect, it succeeds.