It’s a pretty standard thriller, but Australian import Son of a Gun still has a lot of things to like about it. It heralds the arrival of a pretty ace filmmaker with the feature debut of short film director Julius Avery. It allows budding star in the making Brenton Thwaites (Oculus, The Giver) to deliver his best performance to date in a lead role worthy of his talents. It gives usually clean-cut Ewan McGregor the chance to play a tough guy with loose morals, something the actor makes the most of. It’s the material that isn’t rising to the occasion.

Sentenced to prison for the first time to a six month term, 19-year old J.R. (Thwaites) finds himself in need of protecting in his maximum security, high risk surroundings. He catches the attention of Brendan Lynch (McGregor), a respected and noted career criminal who sees the young man as a potential aid to escape his 25 year sentence. Agreeing to help a man that has become a sort of father figure, J.R. follows Brendan into a highly lucrative gold heist funded by Lynch’s Russian mobster boss (Jacek Koman).

While most films stumble out of the gate to get better as they go on or they botch the execution of the third act by racing into a hackneyed conclusion, Avery and John Collee’s screenplay has the exact opposite problem, suffering from a great amount of genre cliché in the second act rather than off the top or bottom. Once the heist mechanics start to come into play, Son of a Gun briefly becomes indistinguishable from any crime thriller where a veteran takes on a young protégée. There’s some sage advice, the youngster falls madly in love with a gangster’s moll (played with admittedly nice understatement by Alicia Vikander), tensions arise, there’s a loose cannon relation to the guy funding the heist, a best friend of Lynch who explains that the master criminal isn’t such a terrible guy, etc. 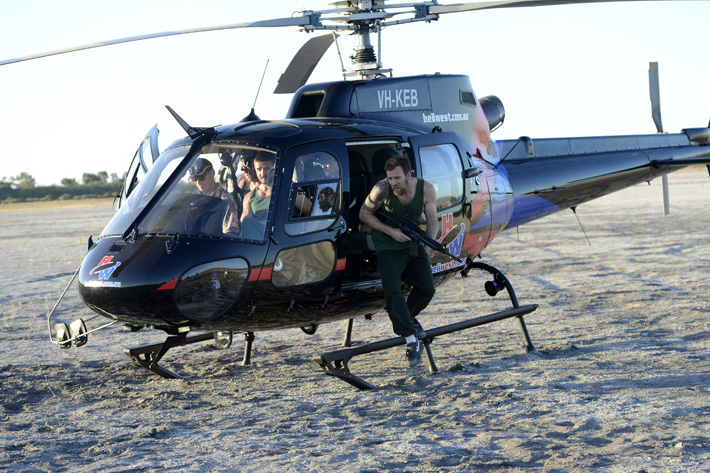 It’s a shame that the film decides to let off the clutch and idle for a little while in second gear because it threatens to put a halt to the whole thing after the really rewarding, rich, and realistic feeling depiction of prison life. The establishing of the relationship between J.R. and Brendan is solid, with Thwaites putting in more heavy lifting than McGregor has to. Thwaites, who has been a great actor for a while now, effectively conveys the fact that J.R. is an aimless, scared child that can only pretend to be a badass in training. He’s a young man at a crossroads, and Brendan sees someone who can be easily manipulated via a perceived sense of loyalty. That unfortunately gets put on hold after an admittedly exciting prison escape because the heist and the undercooked love story suddenly takes centre stage.

Throughout, however, Avery does a fine job of directing the material. The action sequences (even those in the otherwise dull middle) always bristle with a sense of stakes and tension instead of just a bunch of incoherently edited bullets whizzing about. He has a real way with tracking shots, particularly with their framing and staging. They aren’t long, but the way people flow in and out of them (particularly in a subtle segment where Brendan starts being trailed by an increasingly large number of prison inmates) is almost musical in their construction. It’s never showy, but subtly suspenseful, lending the film a unique sense of grace. It’s the rare example of a thriller that’s nimble instead of blunt force.

Things pick up in the final act where McGregor and Thwaites get the biggest chance to go toe to toe. There’s an inevitable double cross that occurs that can be seen from a ways off, but that only makes their dynamic more interesting, uneasy, and vital. McGregor makes for a great ambiguous character of unknown altruism and loyalty towards his young ward, but as the film goes on it’s a wonder to watch McGregor convey Brendan’s gradual unravelling. He vacillates believably between being an uncaring cad and a crook with a heart of gold in the same sequence quite frequently. It might be problematically written, but McGregor makes it work nicely.

It probably won’t be widely remembered in the careers of either of its leads, but hopefully it leads to more work in the future for Avery. I’d like to see what he can do with some great material. This one is okay, but it reads like something that was always destined to just be a solid B-movie. And if that’s what you’re in the mood for, this should hit the spot.