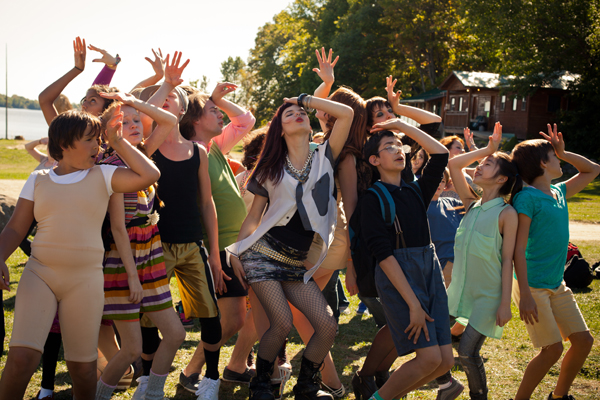 Despite having the somewhat inspired idea of melding the 80s slasher genre with the 70s big screen rock opera, Stage Fright (which arrives in select theatres and on VOD today) is a much easier film to admire than it is to actually like. The problem isn’t that the two vastly different genres are mashing together like oil and water, but the fact that the script feels frustratingly like it’s two or three drafts away from being a really awesome movie. It’s a film that spends far too much time spinning its wheels in neutral before lurching into a climax that goes completely sideways instead of becoming a grand spectacle.

Ten years after watching her actress mother get murdered while performing as the lead in a Phantom of the Opera knock off, Camilla Swanson (Allie MacDonald) finds herself working alongside her brother (Douglas Smith) and her mother’s former manager (Meat Loaf, looking like a dead ringer for Canadian film producer Don Carmody) at the Centre Stage Camp for the Performing Arts. The camp’s horndog, “visionary” artistic director (Brandon Urbanowitz) has chosen the same show that killed her mother as the camp’s final send off for the year. Camilla, breaking camp protocol since she isn’t paying to be there, tries out to land the role her mother once played. Then, a killer who’s mimicking the ghostly spectre in the actual stage musical, starts making suspicious appearances and eventually exacting a bloody revenge of sorts.

First time feature director Jerome Sable previously made a name for himself in the comedy-horror genre with the heavily buzzed about short The Legend of Beaver Dam (which is still amazing and worth checking out), but his ambition gets away from him here and he’s never able to make the two core elements of his film – singing and slashing – come together in a cohesive package.

It’s starts off awesomely enough, with Camilla’s backstory being successfully set up before cutting to a rousing “welcome back to camp” musical number. The energy starts off as high as possible before slowly waning and then dying altogether. For a slasher film, there’s surprisingly little slashing, and what little of it there is happens to be on the relatively tame side. For a musical, there isn’t a heck of a lot of music, either. Well, that’s not true. There’s music, but for the entire middle hour of the film it’s just the same few songs from the show within the show being repeated over and over again.

Nothing all that interesting happens in the middle hour of the film, and considering the film is already a shade under 90 minutes and is designed to be a crowd pleaser, that’s a bit of a problem. It’s hard to believe that a film that melds the two most easily crowd pleasing genres there are can’t find a way to keep toes tapping or the audience’s bloodlust rising, but Stage Fright just turns dull once it lays out all the possibilities of who the killer could be. Is it the bitter understudy (the always awesome Melanie Leishman, who I wish had a lot more to do here than simply glower)? Camilla’s surrogate father figure? The director? The boy with the unrequited crush (Kent Nolan)? The local backwoods gardener? The obviously closeted guy playing the killer on stage (Ephraim Ellis)? The answer once it finally arrives won’t come as a shock to anyone since Sable is unwittingly proving in rapid succession obvious clues to all the people who COULDN’T have started the rampage. In addition to the mayhem and the opening night of the show coinciding, again there is a lack of songs in the stage version that can add anything other than just coming across as a bad play devoid of any real wit outside of irony.

There’s still a considerable effort being made though, and it was enough to make me wish by the time it was over that I liked it more than I ultimately did. Sable clearly has a love for the more detail oriented aspects of slasher films (the film’s appropriately gritty early 80s aesthetic that calls back to Sleepaway Camp and Terror Train, in particular) and musical theatre (there are definitely jokes only theatre nerds will understand), so it’s not that he’s entirely clueless or out of his element. There’s simply a great deal of Stage Fright that feels rushed instead of nurtured into something greater. The cast brings what they can to the material, but when they’re in a genre that’s known for shoddy, poorly written characters to begin with, there’s only so much they can do to help things along.

A good point of comparison for Stage Fright would be the similarly afflicted and flawed 1991 film Popcorn, where a bunch of film students decide they want to have an all night horror movie marathon and one of them is plagued by the memory of a long unseen gimmick film that killed a lot of people. Stage Fright is essentially just the musical theatre take on that film’s hook. Neither film is particularly good, but they’re at least remembered for a few key moments and having a pretty awesome concept. Maybe if this one’s a cult success, the sequel will be a lot better and worthy of an encore performance. This one barely makes it out of previews.