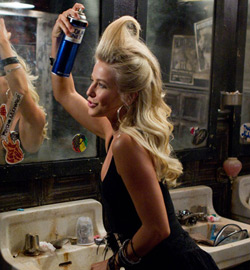 Although overstuffed, lazily plotted, and autotuned nearly into oblivion, the big screen adaptation of the jukebox musical Rock of Ages still has a real kind of shaggy dog charm evocative of the 1980s hair metal scene (minus, you know, any sort of crippling addictions, of course).

From 7 p.m. on Friday, November 26 to some ungodly hour in the morning on Sunday, November 28th, Torontonians were invited to TIFF Bell Lightbox to screen the entirety of Tim Burton’s filmography (excluding the two shorts Frankenweenie and Vincent). This was in celebration of the Burton exhibit coming to town, which was first curated by the Museum of Modern Art in New York City. For some, myself included, the prospect of sitting through sixteen feature films by Burton was intriguing. Others might call it “Hell on Earth”.