Fury mostly succeeds as a war film, but don't expect anything original.

To celebrate the release of the movie Fury our film guy heads to Oshawa, Ontario to ride in and learn about Sherman tanks.
Sabotage (David Ayer, 2014) – There’s an interesting problem with Sabotage that most films never quite suffer from. Once you go through the few supplemental features on the film’s Blu-Ray (which was not made available to press and I had to go out and buy on my own), you’ll get wind that there was a […] 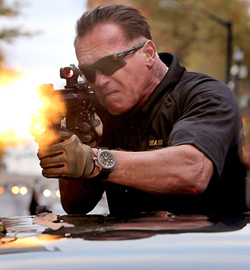 End of Watch perfectly embodies writer-turned-director David Ayer’s crime movie formula (Training Day, Harsh Times, etc). You take a basic crime movie premise, twist it initially in an intriguing way, populate it with talented actors, tease out some unexpectedly dark drama, toss in a few brutal set pieces, and then slowly let it all slip away as the film becomes increasingly conventional in a race to the finish line.