Host follows six bored friends, separated by the quarantine, who host a séance over Zoom and unwittingly invite an evil spirit into their homes.

Operation Avalanche co-writer Josh Boles talks about his tricks of the trade for breaking a story and writing for the found footage format once again. 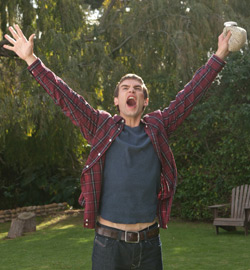 Just one month after The Devil Inside seemingly ruined the found footage film for everyone, along comes Chronicle, a sci-fi tinged powerhouse of a movie that single-handedly saves the sub-genre to stand as quite possibly the best example of the format. Even more than the iconic Blair Witch Project and Cloverfield, Chronicle dares to tell a dark and bold story that actually feels painfully real and heartbreaking despite being somewhat of a superhero origin story.

The first film to be released in any year often isn’t very good. They are the films that are quietly released amid award season fare and during the period where the kiddies are going back to school. Even by those low standards, one would be hard pressed to think of a worse start to a year than The Devil Inside. If there is a worse film than this dreadfully inept “found footage” horror coming out in 2012, I hope and pray I don’t have to sit through it. Six days into 2012 and it feels like the top of the worst of the year list is already in the bag. That record has to count for something, right?

Filled with the requisite amount of jump scares the haunted house sub-genre demands, Paranormal Activity 3 delivers the goods in an interestingly different manner than its two predecessors and in a way that will leave fans of the micro-budget horror series clamouring for a fourth entry. Not everything adds up perfectly, but the one thing that many people will deride it for doing is actually the biggest strength of the film: hinting at a possibility that the series might be ready to go in a more interesting direction. In this respect the film is certainly an improvement over the second film and in many ways it manages to be superior to the original.