Say yes to the dress

Veep and Death of Stalin creator Armando Iannuci does Charles Dickens with a star-studded cast!

Aidan and Daniel spoil the last episode of Game of Thrones ever!

Aidan and Daniel spoil The Last of the Starks!

Aidan and Daniel spoil the first two episodes of the eight season of Game of Thrones!

It's hard to believe the season is already half over, but HBO's Game of Thrones continues to go strong in its fifth episode, entitled "The Ghost of Harrenhal." Gruesome deaths, political schemes, hard truths, and revenge are par for the course in this series and nowhere is that more evident than in this episode. 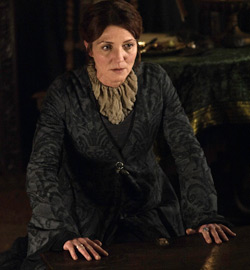 Starting with a fart joke and a direwolf mauling, "Garden of Bones" is an episode full of timely interventions and fateful confrontations, as well as one of the most disturbing cliffhangers you're ever likely to see on TV. Despite some missteps, HBO's Game of Thrones continues to be one of the most compelling shows on television with this fourth episode of the second season.