Covering all genres, numerous countries, high arthouse stuff and populist entertainment, Carrière was a natural fit no matter what he worked on, his talent and sensibilities blending in seamlessly with the directors with whom he collaborated.

While it shares traits of his more recent work, The Image Book is the most fun to watch of any Jean-Luc Godard film for a very long time indeed.

Jean-Luc Godard's latest Goodbye to Language offers his supporters a lot of fun, and detractors an easy out. 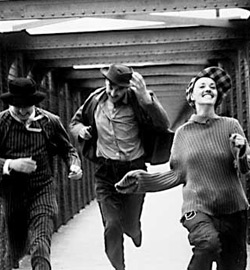 This week, the TIFF Bell Lightbox in Toronto starts off their Summer in France series, and we look at four classic films showing throughout the dog days: Belle du Jour, Elevator to the Gallows, Breathless, and Le quai des brumes.