About 15 minutes into Tucker & Dale, you will think to yourself: why did no one have this brilliant idea before? Maybe if they did, it would not the work of horror comedy genius that this film is. While initially worried that I saw all the best jokes in the trailer, I was amazed at how Craig and Jurgenson kept the entire film fresh and brilliantly funny.

Shot in just under 10 very long takes, Vivas’ Secuestrados tells the story of a wealthy family who, having just moved into their new home, are held hostage and robbed by three masked men. No harm seems intended for the victims, until one of the thieves’ psychotic personality starts to show itself, and the father of the family attempts to get help. Then all hell breaks loose. 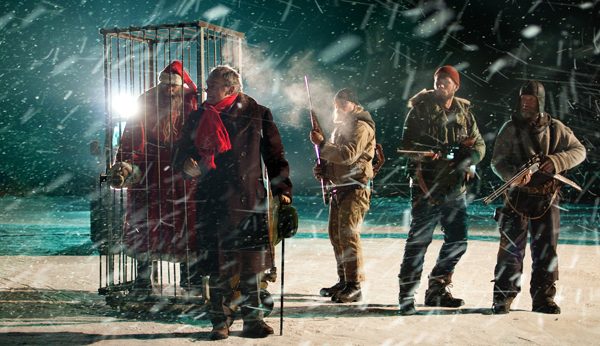 Our North American, contemporary version of Santa Claus apparently comes from Coca-Cola; the red suit trimmers with white, the beard, the jolly laughing belly. Santa Claus or some version of him has been around for several centuries, of course, but our modern age has skewed the origins quite a lot. In this tale of the man, director and writer Helander conceives not of a jolly person who brings presents to little children, but of a demon buried deep under a mountain, a demon that eats children. And it will take a child to stop him.

La Casa Muda has become fairly well known on the fantastic festival circuit mainly for its modus operandi: it was shot in one long take. And deservedly so: this technique, which frequently incorporates first person perspective, creates one of the most terrifying atmospheres in any horror film I’ve watched.

A gem of a comedy from Argentina, Fase 7 tries to find the lighter side of disease outbreak. Sounds like a contradiction, but writer and director Nicolás Goldbart focuses on the residents of a small apartment building in order to examine the (humourous) human condition during trying times.

Eugenio Mira’s second feature is a strange but rare and beautiful bird. A blend of espionage thriller, gothic romance, and fantasy, the title refers to a neurological disorder in which the brain cannot properly interpret visual and aural stimuli, and thereby cannot tell faces and voices apart.
The trailer for Philip Ridley’s Faustian thriller Heartless has hit the web. The film stars Jim Sturgess (Across the Universe, 21) as Jamie, a young man with a heart-shaped birthmark on his face. The East London neighbourhood Jamie calls home has been plagued by violence. Most people believe that the seemingly random violence is gang […]
To see Shelagh’s first batch of  reviews from the 2009 Sitges Film Festival, including Splice, Amer, Cargo and TiMER be sure to click here. Probably the best night I had at Sitges was not at a film, but at a party (like all good festivals, the parties are great). This one was set up by […]
Last February when on holiday in Spain, I was fortunate enough to meet Mike Hostench, co-director of Sitges Festival Internacional de Cinema Fantàstic de Catalunya, the largest fantastic film festival of Europe and one of the largest and most important in the world. His enthusiasm convinced me to attend the festival last month. Believe me, […]