To see Shelagh’s first batch of  reviews from the 2009 Sitges Film Festival, including Splice, Amer, Cargo and TiMER be sure to click here.

Probably the best night I had at Sitges was not at a film, but at a party (like all good festivals, the parties are great). This one was set up by the Film Festival Mafia, a group of film festival hounds of which I am now a proud member. But this was no ordinary party – it was karaoke. You have not lived until you’ve seen the guys from Fantastic Fest in Austin tear their shirts off and rock some Guns ‘n Roses. Oh, such memories. But back to the movies.

The British have a knack for combining horror and comedy. And while this zom-rom-com is not in the same league as Shaun of the Dead, it certainly adds a fun new twist to the becoming-tired-at-lightning-speed zombie subgenre. A group of male friends, in an effort to cheer up one of their lot as he heads for a painful divorce, go to a small town in rural England where the population is 75% female. But as they arrive, it turns out that that 75% have turned into zombie-like creature who will attack anyone with an excess of testosterone.  Politically correct, this film is not; but that’s a good thing. Indeed, it makes as much fun of the way men stereotype and generalize female behavior as much as exposing some of that behavior, which I can say as a woman, is accurate and embarrassing. While the film strays into certain cliches (all the men represent a type, and you couldn’t see these varying types actually hanging out together for example), there are enough laughs and originality to sustain the 90 minutes.  Apparently there’s a “cathouse” script in the works. Now that I will see.

Certainly Indonesian cinema knows how to scare the crap out of world audiences, whether it be through subtle ghost stories or headlong violence and gore. Macabre into the second category. A group of friends are driving home to Jakarta on a rainy night when they encounter a lost girl. They offer to drive her home, where she in turn offers to make them a meal. They meet her creepy and surprisingly young mother, Dara, and all hell breaks loose from there. Like Doghouse, this is not the most original of stories. A dark house with spooky inhabitants, young horny people being picked off one by one; sinister plots and body parts kept in jars . But it’s done with incredible style and atmosphere and there’s never a dull moment. I was peeking through my fingers at the screen at several points and I don’t scare easily. The film centres the plot around a brother and sister, whose strained relationship is put to the test when they must fight to save each other from the house of horrors. This gives the audience something to hold onto, which otherwise might have left the film stranded in the land of who cares about the people getting killed. The directors crank up the tension at just the right pace to keep the adrenaline pumping. 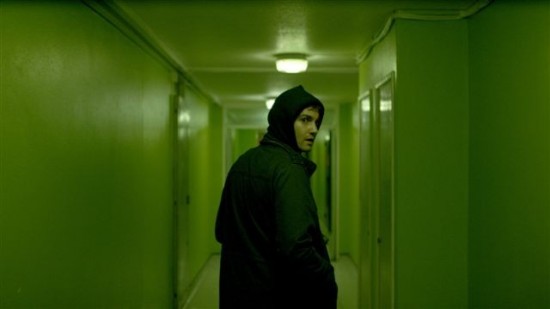 Philip Ridley could be called the Terrence Malick of British film. He has only made three feature films in the past 20 years, and all have been strange, illustrious gems: Reflecting Skin, The Passion of Darkly Noon, and now Heartless. Delving into theology, love, and the body, Ridley’s work haunts the viewer, and frightens them in a truly real and heart-stopping manner. I saw this film on my third to last day of the festival, and it was the one I had been waiting to see. By far my favourite at Sitges, and now one of my top five films of the year, Heartless is terrifying and beautiful. Set in troubled East London, it tells the story of Jamie (Jim Sturgess in his finest performance to date), a young man with a disfiguring birthmark that leaves him painfully shy and with few friends. Working for his brother and still living with his mother, Jamie spends his free time photographing the decaying buildings and littered empty lots of his neighbourhood. When a rash of gang violence threatens the area, Jamie discovers that the true criminals are in fact demons and he finds himself drawn into their world.

While the narrative is perhaps more conventional than Ridley’s previous work, it does not stop him from collapsing together genres and imagery from fairy tales to horror to urban blight. Jamie is the embodiment of the space he occupies. Ostracized for his less-than-perfect face, he is neglected and left to fend almost entirely for himself, with no protection against those who would use and abuse him. He longs for love and only manages to open up to a few kind souls who can look past his face into his heart. When offered the chance to rid himself of his birthmark and fit into the “normal” world, he finds himself paying a Faustian price beyond what his battered soul is capable of. The brilliance of the film lies in its simplicity, its honest, and its true horror. It is a horror similar to that of Cormac McCarthy’s The Road – horrifying because it is so real and the viewer could easily imagine themselves in Jamie’s place, forced to make the same choices because they see no other way out.

One review of Heartless called it a fever-dream, and I am inclined to agree.  It is the kind of film that leaves your heart raw and aching, and your mind reeling. Ridley lets the darkness permeate the space and filter into his characters, who are unable to prevent their own hearts from being eaten alive.