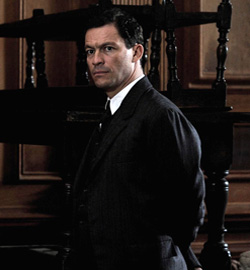 While far from the best film of the year like Ridley Scott said last year upon the film's UK release, The Awakening is an efficient and slow burning chiller does offer some genuinely good scares, some interesting thematic material, and a strong leading heroine before a muddled ending sours things slightly.

Enter to win one of five pairs of passes to see The Awakening during its run of engagement in Toronto or Vancouver from Dork Shelf and eOne Films.