Managing Editor Jason Gorber reviews Dark Phoenix – Does it raise the X-Men franchise from the ashes of Apocalypse or is it a First Class failure?

In anticipation of the Disney-Fox merger, Ben and Daniel recast the mutants from the first three X-Men movies and give their Avengers: Infinity War predictions!

Folks... there are a lot of hot dads in comics. Happy Father's Day to us! 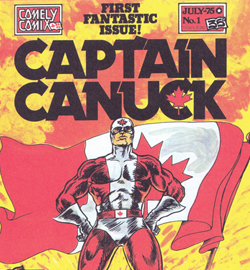 We talk with Will Pascoe, director of the documentary Lost Heroes: The Untold Story of Canadian Superheroes about the largely forgotten about or sadly lost legacy of the Canadian born superhero.

And that's OK. Let's stop punishing new fans for loving the same things we do!

Generation Hope #9 is “the one where we’re using the X-metaphor to talk about teenage gay suicide.” It's not a story where they "deal with" teenage gay suicide, of course; that would imply some sort of satisfactory resolution, if not an outright happy ending.

5 Ronin is a new mini-series, being released in weekly succession, which reinvents five of Marvel’s most popular characters in 17th century Japan. This is an out-of-continuity tale, in the same vein as DC's Elseworlds line, or Marvel’s 1602.

This book is hilarious. The series continues to be a wonderful send-up of the Marvel Universe, while having more action in each issue than all the Wolverine titles combined. The dialogue, or should I say, ‘internal narration’, is fantastically crafted. It transforms this title from being violence-for-sales-sake into a fun, slightly crazy, and witty read.
The Hollywood Reporter just dropped some pre-production news about the upcoming Wolverine sequel.  Christopher McQuarrie is set to script the sequel, which will be set in Japan. If you suffered through the first Wolverine film, and actually stuck around until the end of the credits, you’ll know that Wolverine is briefly shown at a bar in Japan.  […]
Welcome to this week’s pull list.  This is a light week for me, but the quality of books certainly makes up for that. Fantastic Four #567 So Mark Millar (pronounced “Miller”) and Bryan Hitch brought us The Ultimates, one of the best books of the past decade without a doubt.  This is the 8th issue […]
What is a pull list? Most comic book retailers offer memberships to frequent customers. You pay to have your most frequently purchased books pulled so that you don’t have to pull them off the racks. This can save you time, disappointment, and, sometimes, money. Say you want a copy of a very popular Spider-Man / Superman […]