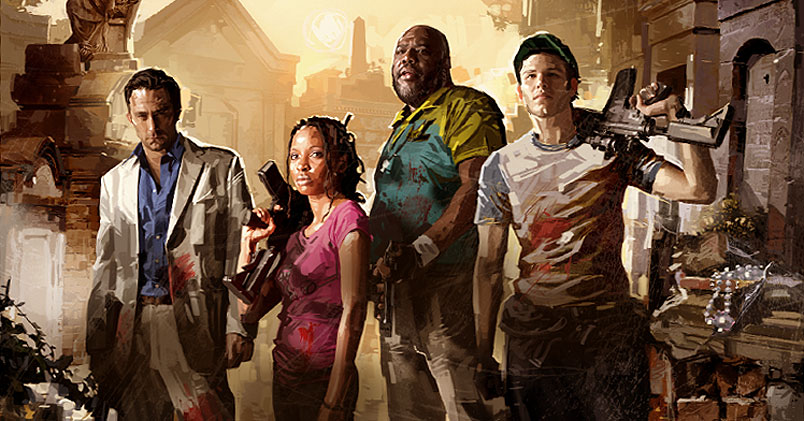 Left 4 Dead 2 is a game which made me a pretty happy man.  There were lots of improvements, and despite a few steps backwards, overall it was a welcome addition to the shelf.  One particular aspect most people seem to enjoy is the new infected (playable zombie characters) which include: the Wandering Witch, the Charger, the Jockey, and the Spitter.  But why stop there? I’ve got ideas a-plenty for new infected that will keep the survivors dying all the way to the bank (assuming it’s been converted into a makeshift cemetery).  Without further ado, here are the top 10 infected which should/should not be added to the Left 4 Dead franchise:

10. The Child Hurler: It’s just natural progression.  The first game had the Boomer, belching goo on top of you.  The second had the Spitter, vomiting venom all over the place.  It’s just natural that the next in line in zombie evolution is the Child Hurler – a zombie that simply throws child zombies at you like rocks from a satchel.  If you shoot its arm off it can no longer throw, but it is even better to counter-hurl a gas tank.  Or your own child.

9. The Coward: Sure, you can blow the crap out of hordes of infected rushing you madly, but can you chase down the Coward special infected?  Totally afraid of you, despite its lust for brains, the Coward just chickens out and bolts off through the level.  You need training like Robert Muldoon to hunt it down and then when you tackle it, it begs for its zombie (un)life.  This breeds the old debate of what constitutes humanity when it’s the zombie begging for mercy, thus initiating a moral quandary, thus arguments, thus one subtly dangerous special infected.

8. The Zombie With the Bees in its Mouth and When it Screams it Shoots Bees at You: I guess this one is pretty self-explanatory.

7. The Gymnast: Hunters and Jockeys can be difficult to hit, but compared to the Gymnast they are matter.  As in: easy targets (since it’s impossible to shoot and not hit matter at the subatomic level).  Back-flipping, cart-wheeling, and somersaulting her way into the midst of the survivors, Gymnast infected use your face like a pommel horse, knocking you over, and then they stick the landing on your skull.  Your gunshots will miss a Gymnast zombie if she turns sideways, betraying her lithe frame, but if she loses her balance she will crumple to the ground, start bawling and convert to a Witch.

6. The Wheeler: There are many multi-gendered, multi-racial games out there, so I, for one, think it’s time to start including disabled persons and persons in wheelchairs – thus, the Wheeler, a zombie in a wheelchair.  Players will know when the Wheeler zombie is nearby when they hear the haunting clickity-clack of its rusty spokes.  Popping a wheelie, it rushes survivors with the bottom of its chair raised up to deflect any bullets, running over shins before mauling the prone bastard.  The best defence is likely a set of stairs.

5. The Ironic Teenager: Though I’m sure most adults wouldn’t be able to tell the difference, teenagers can become infected zombies too. Of course, for the Ironic Teenager special infected, the last thing it wants to do is feast on your flesh, which is blaarg passé (“blaarg” being zombie teenager slang for “extremely” or “totally”).  Survivors can spot the Ironic Teenager because it will spawn in basements, under bridges, or in alleyways.  They won’t attack you at all, but their know-it-all expressions will make you want to kill them anyway.

4. The Axed: Surely some infected carry wounds from previous scraps – like, perhaps, an axe through the chest.  Still (not) alive, these zombies rush you while sporting a massive axe wound with axe accessory.  The best way to waste them, obviously, is to equip the axe yourself, mid-rush, and then using it to finish the job.  Beware the Axed’s brutal cousin the Still-Whirring-Chainsaw-Gut infected.

3. The Stooge: These zombies are best spotted by their bowl/electrified haircuts.  They approach the survivors and engage them in a ridiculous series of slaps, bops, face-pinches, and kicks to the bottom.  The Stooge is, in fact, basically indestructible.  The only way to kill one is by swiping away with a frying pan or cricket bat ad nauseam.  Of course, the joke’s on the survivors, because when they escape to the chopper the pilots will inevitably turn out to be three more Stooges.

2. The Samuel L. Jackson: These zombies have had it with these motherfuckin’ survivors in their motherfuckin’ zombie zone.  Not surprisingly, they also resemble and for the most part are Samuel L. Jackson.  Though slow, they are strong, and will shout a slew of profanity at you before beating the living shit out of you.  If you’re lucky and a Samuel L. Jackson infected appears near water, 50% of the time they get eaten by a genetically mutated shark.  Hot damn.

1. The Crotch-Eater: Witches are freaky, Tanks are intimidating, but until you’ve stared down a Crotch-Eater, with their festering, crotch-hungry jowls, you don’t know fear.  After all, the only thing this zombie wants is your crotch – and it will do anything to get it.  In fact, the only way to distinguish Crotch-Eaters from normal infected is by their eyes, which will be focused intently on your crotch alone.  This can be problematic on smaller TVs or monitors.  The best way to kill a Crotch-Eater is to get a teammate with a chainsaw to sever the neck.  Due to the Crotch-Eater’s crotchal proximity, this carries its own concerns…