The Armstrong Lie Review - That Shelf Skip to main content 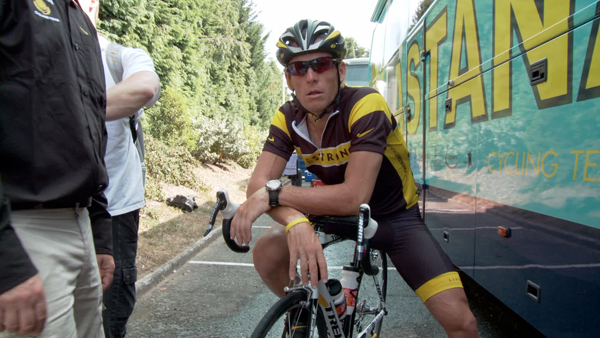 Back in 2009 when Armstrong resurfaced to make a return to cycling after a prolonged battle with cancer that made him an inspirational story to millions around the world, Gibney was hired to film the comeback. Admittedly getting caught up in the Livestrong hype and often being questioned by peers as to why such a serious documentarian like himself would make what’s essentially a puff piece, Gibney amassed a great deal of footage that was only peppered with people speaking out on the already widely known doping charges that had been brought forward. But after Armstrong was caught having used EPO, HGH, and blood doping (a literal transfusion of depleted blood with some that has a higher white blood cell count), Gibney abandoned the project. Now in the light of Armstrong’s own admission to Oprah Winfrey, the filmmaker has come back to his old footage to ask Armstrong to his face what happened and why he did it.

There’s no mistaking that Gibney has a renewed sense of vitriol towards the project. Narrating his own film to make it know he has personal beef with Armstrong and what he almost made him produce, there’s definitely a justification to be made for the harshness. To Gibney’s credit, he handles Armstrong’s character with as much humanity as possible, and he does try to underline the few genuinely good things about the man’s character (especially sticking up for the charity he founded – that of the once ubiquitous yellow rubber wristbands – as something that still has a positive impact).

It’s hard not to feel for Gibney, who ultimately paints himself, the sport of cycling, and the people who were bullied by Armstrong’s often litigious motions into silence. His reputation could have been destroyed alongside Armstrong’s if the film ever managed to get out they was it was originally being made. But while the new revelations from people just speaking out on the subject for the first time and an unused talk with Armstrong’s controversial former trainer Michele Ferrari hold a lot of context for the man’s transgressions, Gibney can’t let go of his old movie. Spend far too much time documenting the 2009 Tour de France that he was already covering in agonizing detail, it’s all just “did he know” and “was he clean for part it” posturing that adds nothing but 30 minutes to the film that absolutely doesn’t need to be there.

That footage combined with Gibney’s sorrowful narration bear the mark of a man who needed to make The Armstrong Lie to exorcise his own demons. And when one looks at Armstrong’s currently over-cavalier attitude, the righteous indignation makes sense even if it isn’t always exciting to watch. In interviews conducted this year, the now stripped of his accolades cyclist essentially has taken a new, insidious point of view that could be paraphrased, thusly: “Yeah, I know I got caught, but what are you gonna do? I mean, I’m kinda sorry, but let’s be honest here. We all made a lot of money and everyone was doing it.” It’s a great examination of how a human interest story can lead to some great investigative journalism and a poignant portrait of a man who could only lie harder every time he was about to get discovered. But while it’s fine overall, there’s lots of unnecessary filler here.