Cibele is creator Nina Freeman’s based-on-a-true-story version of one woman’s sexual awakening, as well as one of the most thought provoking games I’ve played all year. Mundane yet honest, it effectively uses the conceit of a game-within-a-game to capture the awkward fumbling of young intimacy. Developed by Star Maid Games, Cibele is raw, heartbreaking, and painfully voyeuristic, the rare game that unflinchingly explores sexuality with any kind of nuance and the even rarer game that does so from a women’s perspective.

So what kind of game is Cibele?

For lack of a better term, Cibele is a desktop simulator. You play as Nina, an 18-going-on-19-year old college student who spends most of her free time playing Valtameri, a fictional MMO (think World of Warcraft) in which you’re able to fight monsters and chat with other players (Cibele is the name of Nina’s in-game character). The game is divided into three acts set months apart, each beginning on Nina’s desktop, where you can rifle through blog posts, photos, emails, and other personal effects. Once you’ve clicked through everything, you log into Valtameri, where a boy named Ichi will join you via voice chat for audio discussions that play out while you’re killing monsters.

It’s impossible to die and there’s no real challenge to speak of, so Valtameri is mostly there to provide context and to give you something to do while you’re chatting with Ichi. The primary, um, thrust of the game is in the scripted conversations between Nina and Ichi. You listen to the two teens as they improvise their first (long-distance) romantic relationships, occasionally leaving the game for live-action cut scenes in which Freeman stars as the fictionalized version of herself.

That’s pretty much it. The game doesn’t offer answers as much as it tries to capture the eager-yet-tentative optimism of young intimacy with as much accuracy as possible, and in that regard it’s exceptional. Cibele is built with the most specific, private details of a person’s life, but it manages to achieve a sort of universality with that specificity. We’ve all been that awkward person grasping in the dark while searching for someone to love us. (Sadly, 19-year-old me shares more in common with the non-speaking members of Nina’s guild, the lonely boys on the sidelines jealous of the relationship developing between Nina and Ichi.)

What’s weird is that I almost feel like I should not be writing about Cibele. I’ve had quite a bit of difficulty processing my thoughts because I am palpably aware that I am not the target audience. I’ve never been a young woman, nor have I ever come of age as one, and while I can (and do) empathize with the main character, the game probably resonates more strongly – or at least more directly – with women who may have lived through similar events. Whereas I’ve never had any kind of online romance, Cibele is unapologetically idiosyncratic, a thoroughly modern coming-of-age tale for a generation of women that grew up alongside people they met on the Internet.

That’s fine. I do not need to see my experiences reflected in every game I play and I appreciate games like Cibele precisely because they come from such different perspectives. But I have no idea what’s supposed to be attractive about Ichi, and I don’t know if that’s because I identify as straight or simply because I’m (slightly) older. Beyond the physical, the connection is based on two common traits – they both play Valtameri and they’re both yearning for intimacy – but to me Ichi often seems downright manipulative, criticizing the other women in Valtameri and projecting a brand of online possessiveness that feels a little too controlling and defensive.

But that’s not the sort of thing anyone notices the first time around the track. Through blog posts and photos, the game makes it clear that Nina generally feels sexually undesirable next to her friends, and discovering that that’s not the case – that there are other people who will be attracted to you as you are – can be so intoxicating that it blinds you to red flags. There’s also a degree of disbelief. Does this person really like me? Cibele expresses the excitement you feel when you first realize that you’re actually allowed to talk about sex with a potential sexual partner.

The same is equally true for Ichi, who is never framed as a villain. We’re not privy to his innermost thoughts, but he doesn’t seem to know what he’s doing or what he wants any more than Nina does. If the words come out wrong (or even if they seem toxic), it’s a learning process for him as much as it is for her. 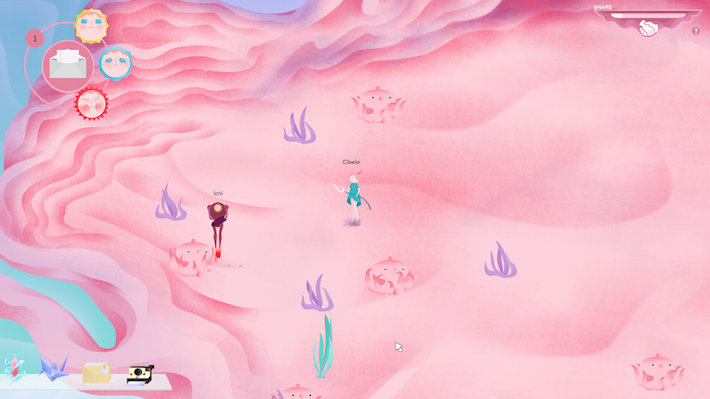 As the player, it becomes awkward because we can see all of the ways that the relationship is doomed to fall apart, but it’s not our place to intervene. Thanks to mutual low self-esteem, Ichi and Nina feed each other’s insecurities as they race to see who can be more self-loathing. Nina even denies some aspects of her personality to conform to what she thinks he wants. Cibele shows the terrible things that people do to themselves when they want to feel wanted, demonstrating how it can be impossible to have a healthy conversation about desire if you don’t know who you are and what you want to stand for.

That’s also what makes the game so powerful. Cibele takes players behind the curtain, giving you a glimpse at the kind of inner life that everyone has but rarely shows to the public in any meaningful way. The fact that an insecure 19-year-old woman would never voluntarily share those thoughts and feelings with a 29-year-old man only amplifies the effect. I felt like I was seeing things that I was not supposed to be seeing while playing a game that I was not supposed to be playing.

In no way is that intended as a criticism. Cibele made me uncomfortable, but intimacy is uncomfortable when it’s unfamiliar so that feels appropriate, especially since we’re watching intimacy between strangers. When it comes to sex, nobody really knows what they’re doing at first, and no amount of reading or friendly advice can truly prepare you for that moment because it’s not the kind of thing you can learn in a classroom. The only way to gain that knowledge and experience is to stumble through it for yourself.

More importantly, Cibele also helps explain why that process can be so difficult and so frightening. It demands vulnerability. To be intimate is to be understood, but in order to be understood, we have to risk disapproval if people don’t like what gets revealed. That runs contrary to the desire to be liked, which is why people try to hide, to look better next to an abstract ideal while avoiding the honesty that would make for a more stable romantic foundation.

It’s scary, but Cibele is so powerful because people are able to relate to that vulnerability and it gives us comfort to know that other people are going through the same emotional ups and downs. Just as Nina Freeman exposes herself to the critical eye of the player, so Nina makes herself vulnerable to the judgment of Ichi in Valtameri, an instance of art imitating love that demonstrates the empathetic value of truth in both.

If it seems like I’m rambling, that’s probably because – much like love – Cibele stirs so many complex and contradictory thoughts that it’s impossible to sort them out coherently. I could be wrong about everything I just typed. But all romance is ultimately personal insofar as a mutual relationship is only possible when both parties know what they want well enough to ask for it. That lesson remains true regardless of the nature of the people involved, and that’s what makes Cibele such a personal yet poignant representation of maturity.