Gamercamp reached the end of its run with Level 6, but the final festival still gave us plenty to look forward to. So rather than focus on the past – you can do that over here – I’d rather turn to the future to highlight a few of the excellent games that were on display throughout the festival. These are games you’ll want to keep an eye on, especially if/when they make it back to Toronto.

I Stopped Talking. You’ll Never Guess What Happened Next.

Keep Talking and Nobody Explodes came up during our Gamercamp previews and the 90s action simulator more than lives up to the hype. The game is played in pairs, with one player wearing an Oculus Rift and staring at a digital bomb. The other player, meanwhile, has the instruction manual. That means that one person has to figure out how to defuse the bomb without ever getting to look at it while the other has to hold the bomb without knowing what to do with it.

There’s a delightful tension in the distance between the two roles. How well can you describe the bomb to your teammate? Survival depends on accurate communication as much as it does on sheer problem solving ability, and it’s easy to get frazzled as the timer ticks down and the pressure mounts.

Keep Talking could probably work just as well with pencil, paper, and a Dungeon Master’s partition, and I suspect we might see a simpler version once the game makes it to market. However, I can’t deny that Oculus Rift enhances the experience, creating a fascinating sensory deprivation for the person defusing the bomb. It really does feel like being in the movie Speed, minus the bus and the evil machinations of Dennis Hopper.

I played Axiom Verge for all of fifteen minutes, but the game managed to make an impression. A Metroidvania throwback that’s closer to the Metroid than the Vania, Axiom Verge is the kind of game that’s designed to intimidate, a 2D expanse of maps and branching paths that can only be accessed with specific items that you definitely don’t have.

I didn’t see any of that sprawling content. I spent the entirety of my fifteen minutes battling one hideous alien space slug that pelted me with bio-organic grenades and laser beams while screeching like a rejected sound effect from Star Wars. It was so completely awesome that everything else ceased to be important, shooting Axiom Verge to the top of my list of most anticipated titles.

I still don’t know what half of the buttons and items are supposed to do so I can’t go into too much detail. (I don’t know anything about the plot, either.) But suffice it to say that the artwork is fantastic and the controls are fine, so I’m optimistic that the rest of the game lives up to the expectations set by the slug. If you’re the kind of retro gamer who likes to dismantle massive bosses one flashing hit box at a time, Axiom Verge could be the game you didn’t know you were missing.

It’s All in the Wrist

Henka Twist Caper is like Johann Sebastian Joust crossed with Twister. Every player tries to hold a PlayStation Move controller in a set position while preventing other players from doing the same, a gameplay mechanic that leads to a lot of jostling and silliness as players box each other out like amateur basketball players on the playground.

The game is physical, but crafty players can win without relying on strength. Friends do seem to be a bit more aggressive with each other than with strangers, though the game remains fun regardless of the participants. People get over their inhibitions pretty quickly when it comes to competition.

Unfortunately, most people don’t own half a dozen Move controllers so it’s unclear how well Henka Twist Caper will translate to home environments. But it’s a blast in an arcade setting like Gamercamp, which is why the game stands as one of the highlights of the weekend. 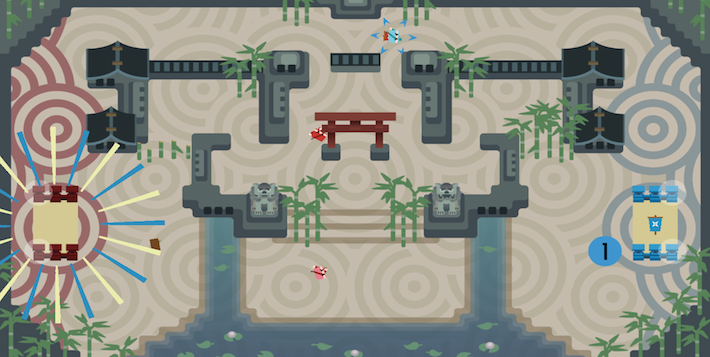 Gamercamp was awash in local multiplayer titles, all of which I enjoyed and all of which are worth a look if you need to wile away an evening with some friends. Standouts include SlashDash (pictured), a Samurai-themed take on capture the flag in which you can teleport and hit your teammate with a sword to make him or her move faster, and ClusterPuck 99, a full-contact version of soccer played in arenas littered with spikes and other obstacles (think Hokra, but with a lot more dying).

There were also a few old favorites (read: games that I’ve played before), including Toto Temple Deluxe, N++, Starwhal, SSMP, and Pix the Cat (which is currently available for free via PS+). They’re still good, as is Particle Mace, a clever newcomer that handles like Asteroids with a drag chute.

Every one of these games facilitates camaraderie, trash talk, and conversation while proving that there’s still untapped design space in the local multiplayer sub-genre. You don’t necessarily need to master or own all of these games, but it never hurts to have options when hosting a party. 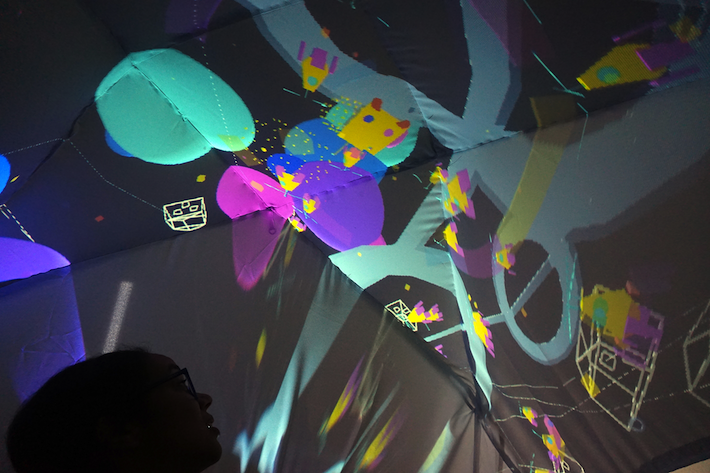 Projected on the ceiling of a domed tent, Mouffe is relaxation therapy in digital interactive form. The game controller is a wired blanket. To play, you lie down and stare at the ceiling and watch as the images change kaleidoscopically in response to your movements.

The effect is deliberately hypnotizing. I almost fell asleep while playing, making Mouffe the only game for which that would be high praise rather than condemnation. The small tent is like a rustic, personalized IMAX screen that blocks out all exterior concerns, the soothing blend of music and color taking you away from the chaos beyond the walls.

Mouffe may not have objectives in the traditional sense, but it is the kind of project that made Gamercamp a one of a kind event and the experience is worth it. I’d love to see more developers exploring similarly experimental ideas. I hope those developers keep coming to Toronto now that Gamercamp is gone.

Gamercamp will truly be missed. Thank you to Jaime Woo, Mark Rabo, and all the volunteers and presenters that made it possible.