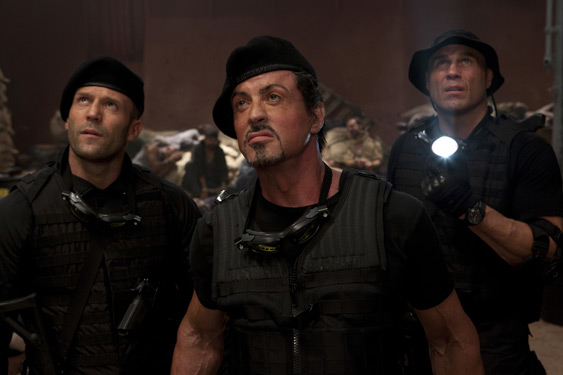 Thanks to Sylvester Stallone, Arnold Schwarzenegger and Bruce Willis, the action film reached its height in the late 80’s and early 90’s. It was a world where a man could battle an army of terrorists single-handedly and not only survive, but slaughter them all; where a man could fire forty rounds from his hand gun—while flying through the air—and still have bullets to spare; where it was possible for a man to fight a helicopter with his nothing more than his bare hands—and win! Yes, Stallone, Schwarzenegger and Willis—and to a lesser extent Van Damme, Seagal and Lundgren—exemplified the action movie at it’s zenith. In more recent years, the action torch has been taken up by actors like Jason Statham and Jet Li, who  have done the genre proud. So when Stallone announced that he was making The Expendables, and that it would feature most of the guys I just mentioned, action film fans, myself included, were elated. But things were just too good to be true. I’m sad to report that as awesome as The Expendables sounded on paper, the film simply does not live up to expectations. I left the theatre seriously let down.

A team of mostly over-the-hill mercenaries, known as The Expendables, take on a job at the behest of the CIA. The team, led by Barney Ross (Sylvester Stallone), is tasked with taking down a brutal South American dictator (David Zayas) and his rogue CIA advisor (Eric Roberts). Add a damsel in distress, a betrayal by a member of the team and you have a pretty standard blueprint for an action movie. Stallone could have elevated this B-movie fare to the next level, especially given the fantastic cast he assembled, but the plot is hackneyed at first and is nearly incomprehensible by the end.

To his credit, one thing Stallone does get right is the action. There is some really great gun play and hand-to-hand fighting in the film. The action itself is pretty solid, but is almost universally ruined by the obscenely fast paced editing. Some sequences are rendered nearly unwatchable by the quick cutting. Editing notwithstanding, this doesn’t even begin to address the last quarter of the film, which contains more explosions than I’ve seen in a movie in a long while; explosion after explosion after explosion, it was the first time I was ever bored by things blowing up.

Aside from the action, the best part of “men on a mission” movies is usually the back-and-forth dialogue between the members of the team. Unfortunately, The Expendables barely has any of that, and what banter there is falls utterly flat. It’s a mix of slurred speech and bad acting, punctuated by even worse editing. In many cases the script feels like it was written mere minutes before the cameras rolled.

The scenes between Ross and Tool (Mickey Rourke) are a horrifying, steroid fueled, plastic surgery nightmare—it’s the one time in the film you’ll be thankful for the quick cutting. Rourke’s grotesque appearance aside, he turns in the most interesting and convincing performance in the entire film, which is sad when you consider how few scenes he’s actually in.

Jason Statham and Jet Li, perhaps the most relevant action stars in the film, are barely used. Li feels particularly wasted. His character Yin Yang (Yes… Yin Yang) doesn’t really do much at all; like every other bit of action in the film, what Li does do is obscured by a flurry of cuts. Also, I’m sure Eric Roberts is probably a nice guy, but the actor continues to be type cast as slimy, manipulative creep. Give the guy a break! And what about that much hyped Bruce Willis and Arnold Schwarzenegger cameo? The best bits from that scene are what you’ve seen in the trailers, the rest is a hastily filmed, poorly planned little scene that feels very tacked on.

The Expendables is a violent mess of a movie. At times it can feel like a sweet throwback to the 80’s action hey-day, but it’s barely a step above the straight-to-DVD fare its stars have been languishing in for the past decade. The Expendables had so much potential, it’s a real shame that the film doesn’t work better. Stallone continues to rest on the laurels of his past glory, this is yet another wasted opportunity. If this film has proven anything it’s that he clearly has no interest in innovating, at this rate we can expect a sequel to Demolition Man by the time Wesley Snipes gets out of jail.