In honor of The OASIS and Ready Player One, here are eleven fake video games that we wish we had the opportunity to play. 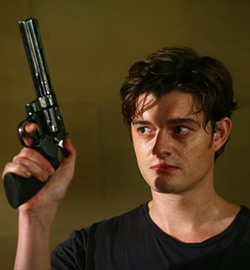 Director Tarsem Singh previously made two visually stunning, but incredibly boring and boneheaded films (The Cell, The Fall) before taking on his latest film Immortals. Undoubtedly talented when it comes to visuals, his latest film somehow manages to rank as the least of his efforts, but not for lack of trying. Whereas his past efforts have been ambitious failures, there simply isn’t anything in this sword and sandals epic that hasn’t been done before, or better, hundreds of times before.
Thanks to Sylvester Stallone, Arnold Schwarzenegger and Bruce Willis, the action film reached its height in the late 80’s and early 90’s. It was a world where a man could battle an army of terrorists single-handedly and not only survive, but slaughter them all; where a man could fire forty rounds from his hand gun—while […]
Paramount Pictures has let slip the first official photo of Mickey Rourke as Ivan “Whiplash” Vanko in Jon Favreau’s Iron Man 2.  Rourke’s character is actually a combination of two Iron Man villains: Blacklash and a Russian villain Crimson Dynamo.  The photo no doubt represents an early iteration of the character in the film; as […]
Both long rumoured to be in talks for roles in Iron-Man 2, news broke today that Scarlett Johannson and Mickey Rourke have officially signed on for the Marvel sequel. Johannson will play S.H.I.E.L.D agent Black Widow, while Rourke will be playing the villain Whiplash. John Favreau returns to the director’s chair and Robert Downey Jr. […]