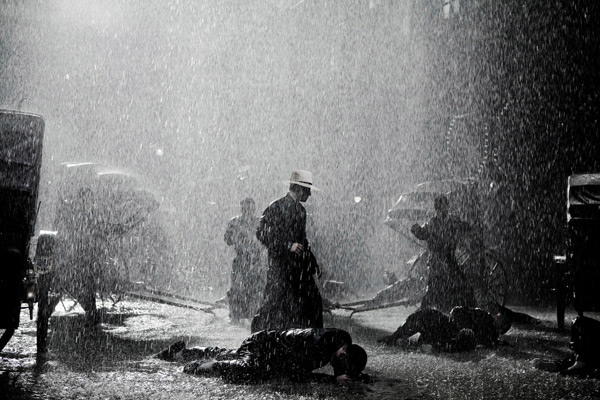 Wong Kar Wai’s The Grandmaster is a tricky movie to review because it doesn’t really feel like we’ve seen the completed film. After a few years of avoiding excessive tampering, Harvey Weinstein has returned to the editing room with a vengeance lately and The Grandmaster is the first victim of Harvey Scissorhands 2.0 (with Wai supervising the cuts personally). The resulting movie feels episodic, awkwardly structured, and often unsure of its possible purpose. Yet, these tend to be qualities of even Wong Kar Wai’s best movies. He’s a filmmaker who favors improvisation and collaboration over rigid directorial control. Regardless, the results are just as disjointed and odd as they are moving and beautiful. It’s a strange and imperfect little movie, but I suppose that’s always what should have been expected from Wong Kar Wai’s left-field decision to make a historical kung fu drama. What else was it going to be? Simple and generic? Wong Kar Wai don’t play that game, fool.

The film follows the life of the kung fu legend known as Ip Man (Tony Leung) who famously trained Bruce Lee in the ways of ass-kickery. Early on, we see him rise through the ranks of China’s most successful fighters. Mixing the styles of various schools, Leung has no problem dispatching multiple opponents during a rain-soaked opening battle and when taking on various masters to make his name, fighting seems as natural as breathing. Sadly, his rise to power is rudely interrupted by the Japanese invasion of China and the years of repression that followed. The old ways of honor in fighting disappear and the living legend struggles to simply be a man in a crumbling empire. Throughout it all, there’s a slow rise to redemption. And of course, with this being a Wong Kar Wai movie, there’s also a long and thoughtful impossible romance between Leung and Zhang Ziyi. She plays a fictional fighter who is Ip Man’s only real mach and thus his only love. Of course, it’s not meant to be, cue a lifetime of chance encounters, isolation desperation, and painful memories.

Despite the potent politics, elaborate fights, and historical syllabus, it’s unsurprisingly the impossible love story that seems to fascinate Wong Kar Wai the most about this project. In fairness, it’s what the man does best and much like his now classic In The Mood For Love, a pained glance from a distance or simple button can be more moving and romantic than a thousand rom-coms. Leung and Ziyi respond strongly to these sections as well, playing icy indifference on the surface with desperate emotion still plainly readable until the occasional explosion. It’s moving stuff, even though it takes up little of the running time. For a filmmaker who has never dabbled in the genre before, the fight sequences are remarkably staged and conceived. Kar Wai never uses conventional coverage, focusing his exquisitely composed frames on small details and textures that somehow edit together perfectly. Despite a barrage of cuts, you’re never at a loss trying to figure out what happened. It’s all clear and stunningly choreographed, even if the visual language doesn’t guide the viewer’s eyes and emotions in the conventional way. It works well enough to suggest that Kar Wai has a future in fight films if he wants it, though it’s hard to believe that’s the case.

Where the movie crumbles is the in the historical drama aspects and it’s hard to know exactly who to blame. Though always beautifully realized, the scenes driven by history always feel disruptive. It’s as if the true events are imposing themselves on a movie that doesn’t want them. Part of that is clearly do to the recutting, which jarringly inserts text constantly to speed up storytelling and set up characters. The running time might be reduced, but the film still feels long because it halts constantly for captions and since that material is so haphazardly explored, it feels superfluous. That shouldn’t be the case given that the movie is a historical drama loosely based on actual events and I’ve got a feeling that it doesn’t all come down to editing.

This is Wong Kar Wai’s first film in five years, his feature made in China in nine, and his first historical drama. None of that is a coincidence. The Chinese government has taken over the local film industry lately, focusing on massive blockbusters that double as history lessons and propaganda. Even former pop action legends like John Woo and Jackie Chan has been forced to work within the form and Grandmaster feels Wong Kar Wai’s concession to the government. There’s still enough idiosyncratic beauty here to suggest Kar Wai made an emotional connection with the material, but in the end this is as close as he’s come to working as a filmmaker for hire, first for the Chinese government and then for Harvey Weinstein. It’s unfortunate that one of the most unique voices in Asian cinema was forced to give up as much control as he clearly has, but a testament to Wong Kar Wai’s unique talent that his fingerprints are still all over the picture. Hopefully it won’t be such a long wait before his next project, because even with two hands and editorial control tied behind his back, Wong Kar Wai can still craft a fascinating flick.