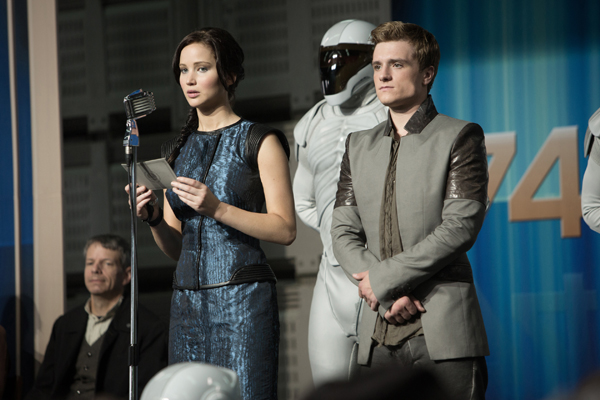 With the exception of one or two differences, The Hunger Games: Catching Fire looks, sounds, feels, and acts almost exactly like its predecessor. While these new wrinkles in the Panem master plan certainly serve to make the second installment in to franchise based on Suzanne Collins’ bestsellers slightly better than the original film, those looking for major advancement of the storyline and mythology (who aren’t as familiar with the books) might be disappointed with all but the last two minutes of the film. It’s an improvement, but a minor one.

Picking up not too far after the end of the events of the first film, Katniss (Jennifer Lawrence) and Peeta (Josh Hutcherson) have returned to District 12 victorious after having pulled a fast one on the Hunger Games organizers to construct a doomed romance that ended up saving both of their lives except for just one of them. This pisses off President Snow (Donald Sutherland) to no end, because Katniss’ insolence has given people in lesser colonies hope, and turned all former tributes into bigger heroes than they already are. When a “victory tour” of the districts proves disastrous, with Katniss and Peeta unable to comfortably toe the party line, Snow enlists the help of new Head Gamemaker Plutarch Heavensbee to create something special for the 75th anniversary of the winner-take-all mass killing event: the contests will all be former tributes from all districts, regardless of age. Once again, Katniss and Peeta are drawn into what’s not only a fight for their lives, but for most of the other tributes who are equally just as annoyed to be there; not to mention their families and loved ones who are now in considerable amounts of danger.

Despite an influx of new blood behind the camera and in the writing department, Catching Fire seems to be content not fixing what mostly isn’t broken, but there are a few things that pop up worthy of praise and note. While the first film played up the differences between the haves and the have nots in the early going before all the bloodletting begins, new writers Simon Beaufoy (The Full Monty, 127 Hours) and Michael Arndt (Little Miss Sunshine, Toy Story 3, Oblivion) use the first half of their film to skewer celebrity culture and spin doctoring. It’s mildly amusing once the viewer realizes that Lawrence and Hutcherson simply have to put a bit more of their own personalities into their “be nice and smile big for the cameras or we’ll kill you” roles, and it acclimates itself nicely as character development for the pair. Then again, their job was largely already on the page to begin with, and any sense of real authorial leadership doesn’t exist.

New director Francis Lawrence (Constantine, I am Legend) makes more of an impact, ironing out a lot of the issues that dogged Gary Ross’ previous effort, especially when it comes to the games of the film’s second half. Largely gone is the shaky camera, in favour of a more polished and fluid work that serves the story a lot better. There’s no more cutting back and forth between the contestants and the TV commentators. There isn’t even very much going back to Snow and Heavensbee unless it’s absolutely necessary to explain something. The violence here is a bit less brutal, but also feels quite a bit more dangerous. Once the tributes are dropped into their new tropical rainforest hellhole, Lawrence makes sure the intensity level stays at a constant instead of tonally bouncing around like Ross did. It makes the characters’ plight feel like something that has actual stakes. That’s probably the best improvement between the two, because the actual world building established in the first film continues naturally without deviation or missing a beat.

As for the cast, I could almost copy and paste my thoughts from the first film here and it would still apply just as much. Lawrence and Hutcherson are still great, ditto scene stealing Woody Harrelson as their constantly drunken mentor Haymitch. Elizabeth Banks and Lenny Kravitz return as the requisite image and style consultants and each gets just a dash more character development this time. Sutherland gets more to do in the early going, and he asserts himself nicely to a passive aggressive threatening authority type. Liam Hemsworth’s Gale – Katniss’ true love – gets pushed so far back into the background he has maybe a total of 10 minutes of screen time, but with the exception of a scene where something truly terrible befalls him his cardboard charisma is hardly missed. Stanley Tucci also returns as high strung, over the top TV host Caesar Flickerman, and he’s just as good, but I swear they somehow find a way to make his teeth even whiter and more blinding.

There are plenty of new faces, but with the exceptionally of the chronically sketchy sounding Hoffman, everyone else shows up once the action heads to the island. Veteran actors Jeffrey Wright and Amanda Plummer are nice additions as former tributes who won with smarts and electronics knowhow back to battle it out on the island alongside Katniss and Peeta. Sam Claflin brings some much needed swagger and good will to his role as Finnick, a new ally for our heroes and a former golden boy of the capital who has made it his mission to protect the life of his enfeebled, elderly District-mate and mentor, who has volunteered for the games in place of someone else originally chosen. Jena Malone gets to shine in a few scenes as an axe wielding badass who has a hard time hiding her contempt for this year’s games.

But overall, it’s really hard not to take my review of the first film and just autocorrect the title for pretty much everything else. Its overall strengths and flaws are almost the exact same. Good cast, well executed story, a well crafted sense of setting, and yet it still takes far too long to set everything up before dropping it all entirely once the games begin. With the exception of a small handful of “Oh, hey, that’s really clever” thoughts that I had, I felt the exact same watching Catching Fire as I did the first film in the series. At least I liked the first film, and I know that the next and final part of the Hunger Games saga will offer something a little different. This one is every bit the second film in a trilogy, just moving the plot forward enough to enact a game changing twist that will make the final film a non-stop climax. I guess I wish I just had more than shrugging and saying that it’s as good as the first film because there’s not much else to add to that statement.