The Iceman Review - That Shelf Skip to main content 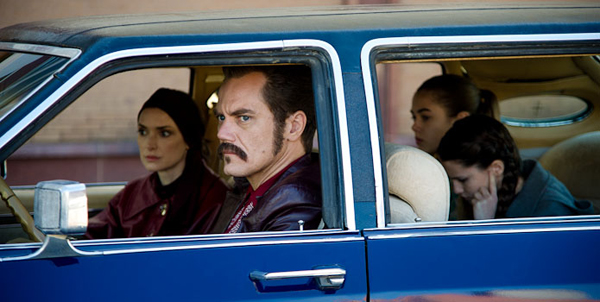 If you thought there weren’t anymore true life mob stories to be spun into movies, then clearly you’ve underestimated the near-limitless nutso possibilities of to come out of the delightful world of organized crime. Here’s a fresh one: Richard “The Iceman” Kuklinski was one of the mob’s most deadly assassins for decades and also a surprisingly dedicated family man on the side. Now, that’s a fairly common gangster story that has been told in films stretching all the way back to The Godfather. Yet, there’s something about the particularly extreme dichotomy in Kuklinski’s life that makes him a intriguing character. No one was even sure of how many people Kuklinski had killed when he died in prison in 2006 while serving out five consecutive life sentences. How he managed to keep that stack of corpses a secret from his family is an even greater mystery. That’s the subject of director Ariel Vromen’s latest film and while The Iceman does follows standard mob movie tropes perhaps a little too slavishly, the central performance from the always amazing Michael Shannon makes the experience worthwhile.

Even before his mass murdering ways, Kuklinski was someone who had no problem living a double life. When he met his wife Deborah (Winona Ryder), Kuklinski claimed to edit sound for children’s cartoons, when he actually worked as a porno editor. Back then the wonderful pornography industry was still owned and operated by the mob, so when a shipping mishap led to a confrontation with the boss, Kuklinski found himself face-to-face with gangster Roy DeMeo (Ray Liotta). He didn’t back down and DeMeo was so impressed by the quiet pornographer’s steely ways that he gave Kuklinski a chance to join the crew by murdering a homeless man in the middle of the street on a sunny day. The job was carried out without complaint and soon Kuklinski was DeMeo’s go to button man whenever an associate or enemy needed to a bullet to the brain or a nap with the fishes.

Cash suddenly flowed freely into Kuklinski’s home and he happily raised a family at night while chopping people up during the day. Eventually Kuklinski was forced to part ways with DeMeo and found himself teaming up with assassin-for-hire Robert “Mister Softee” Pronge (Chris Evans). Pronge got his name for driving around in an ice cream truck between jobs and soon Kuklinski was his apprentice. They’d murder people for the highest bidder and freeze the bodies in the ice cream truck for weeks so that when they were discovered, the time of death could never be accurately determined. Inevitably Kuklinski and Pronge worked jobs that went against Kuklinski’s old boss and when you piss off a gangster, the story only ends one of two ways. For Kuklinski, that meant a foolish streak of murders to try and cover his tracks and an eventual end in a cell. It was only when convicted that his family learned where Daddy went all day.

The plot is interesting because Kuklinski’s life story is so bizarre, but at the same time the life of all gangsters is depressingly similar, so the movie can feel a little predictable as Vromen works through his story in a fairly conventional manner. Thankfully that hardly kills the movie, just lessons it’s ultimate impact. Sequences where Kuklinski brutally takes out a man for hire and then goes home to take his children rollerskating have a peculiar power. Plus, all of the familiar elements are more than made up for by the power of the cast. Liotta is a veteran at this sort of thing with one of the great mob movie masterpieces (Goodfellas) forever tied to his name. He knows his job and does it well, though his special skill at been evil through a smile is sadly never used. Ryder is strong enough as the pained wife to make you wish that she would work more often, while Evans hides his matinee idol Captain America looks under a mountain of 70s locks and facial hair that make him unrecognizable and allow him to dabble in more complex character work than he’s allowed to trot out in blockbusters. Evans is also the center of the film’s wicked streak of dark comedy that prevents the material from ever becoming too overbearing (after all, a killer named Mister Softee can only be taken so seriously).

Of course, no matter how good anyone in the cast is, they are all inevitably over shadowed by Michael Shannon. The Take Shelter star with hypnotic sunken eyes and an imposing lanky figure has been making a case for himself as one of the best character actors of his generation for quite sometime and The Iceman certainly doesn’t lesson his reputation. Kuklinski is a perfect role for him to dig into. Like a Pixies song, Shannon has a knack for loud-quiet-loud-quiet spurts of insanity within a soft-spoken figure. That’s ideal for The Iceman, who has to appear gentle with his family and vicious when holding a gun or whatever household object he plans to turn into a lethal weapon. Shannon succeeds in making the character just sympathetic enough in the early going to force the audience on his side when the bloodshed starts and once his world starts crumbling, he does the stressed out insanity thing as good as any actor. Sure, it all ends up serving another “crime doesn’t pay” tale that doesn’t exactly break new ground, but that comes with the territory. Mob movies might inevitably feel similar, but all it takes is one searing performance like Shannon delivers here to elevate them above the pack. Michael Shannon will win an Oscar one day. It probably won’t be for The Iceman, but at the very least adding this movie to his resume won’t hurt his ever-building cause.