I still feel a roiling guilt in my stomach when The Legend of Zelda comes up. As aware as I am of its pioneering place in gaming history, the impressive barometer of quality in its games, and the frothing mad fandom it has generated, I never really grew up with Link.

There’s also the problem that, without a guide or walkthrough, I am absolutely terrible at them.

Other than the Game Boy Advance’s The Minish Cap, I’ve yet to complete another Zelda game – before, of course, being compelled to finish A Link Between Worlds for this review. Wind Waker? The water temple. Spirit Tracks? The fire realm. And my brief dalliance with A Link to the Past? Shamefully, I gave up after a few hours, after being pummelled by Death Mountain’s cascade of malignant boulders.

But even with my troubled past, The Legend of Zelda: A Link Between Worlds grabbed hold of me and didn’t let go. And thankfully, players with only passing knowledge of the classic adventure that inspired it won’t have any trouble jumping right in and enjoying the game to its fullest.

A Link Between Worlds brings players back to what many consider the series’ heyday: A Link to the Past for the Super Nintendo. This isn’t just a callback, either – players will find themselves back in Hyrule, with much the same geography as they might remember from 1991. Hundreds of years after LTTP, things are very familiar: Link wakes up from a nap, Princess Zelda is in trouble, and you’ve got some dungeons to ransack. The Dark World is cleverly known now as Lorule, ruled over by Princess Hilda, Zelda’s more mysterious counterpart.

Veterans of LTTP –from up to twenty-two years ago – will gawk at the astonishing amount of references and call-backs to the original. The overworld map of Hyrule is the same. Link’s strawberry blonde poof of hair is the same. Many of the graphics and sound effects – such as the armoured soldiers’ rattle when they skitter towards you – are pulled straight from 16-bit land.

But newcomers need not fear getting lost in a sea of references and inside jokes. More than anything, it builds on the idea that ALBW is a new adventure in the same place. It’s not a remake as much as a return, or a reunion with new faces.

You’ll notice the shocking amount of freedom you’re given early on. After a few levels that introduce you to the core mechanics of the game, it opens up quite drastically. You’ll have either of two early dungeons to attack at your choice, and soon afterward a full six dungeons taunt you with Red X’s on the map, full of vicious creatures and MENSA-like brain teasers.

Not only this, but the items have been overhauled with flexibility in mind. While you’ll find a few pivotal items in ALBW’s dungeons, most of your standbys – the bow and arrow, hook shot and bombs, for example – are for sale and/or rent thanks to an odd merchant who has commandeered Link’s house while he’s out saving the world[s]. 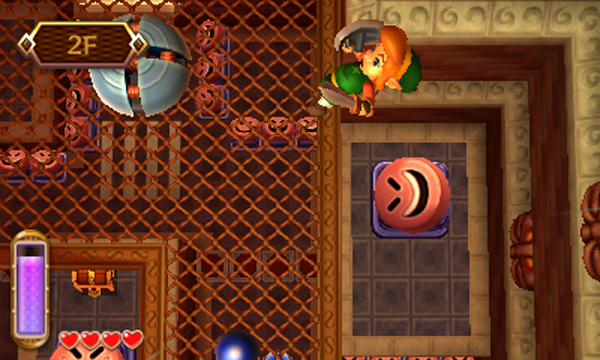 Rent them and you’ll lose them if you get knocked out, and will have to rent them again. Buy them at a much higher cost, and you’ll keep them no matter what, plus you can give it to a magical talking octopus who will eat it and spit out a better version (this is literally what happens).

Only a few hours in, you’ll be swimming across rivers, skipping broken bridges with the hook shot and blowing holes in the mountains with your bombs. ALBW places a grand amount of faith in the player, and you’ll never feel led around by the nose except when the narrative hits you over the head with a compelling thread to follow.

PAINT ME A PICTURE

Bridging Hyrule and Lorule this time is the Merge ability, which you’ll get soon after your first encounter with the main villain, a Kefka lookalike with a hacking laugh named Yuga. Press the A button near a wall or flat surface and you’ll turn into a sloppily drawn portrait of yourself, letting you slip past guards, between certain barriers or simply fly around the corners of large rooms.

You can only use it for short periods thanks to a slowly regenerating Stamina meter – a resource you also use with other items, eliminating inventory management of bombs and arrows but preventing you from spamming your attacks, dictating the pace of both puzzle solving and combat in a refreshing manner for a Zelda game.

Thanks to the new ability, the overworlds and the dungeons have been designed with an incredible amount of detail and wit. Suddenly, becoming one with the walls is now a part of the equation: Can I travel around that wall to a hidden area? How can I evade this enemy’s attacks? Are you really imprisoned by these iron bars, what with all the air between them? 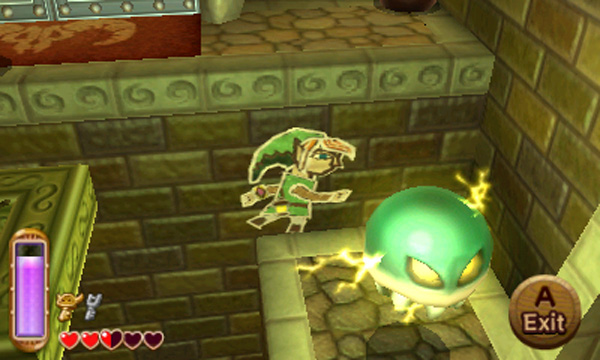 Taking into account that the player can’t simply be allowed to suck themselves into the walls and walk around traps wholesale, the layouts of the dungeons feels insanely dense as a result. Every stairwell, column and light fixture suddenly makes a difference, cutting off your routes or opening up new ones. By comparison, most of the challenging but by-the-books boss monsters feel under-developed.

It’s genuinely difficult to name any serious flaws in A Link Between Worlds. The idea behind the game may sound tired – even lazy, as Shigeru Miyamoto supposedly said about the initial pitch. The bosses are merely ho-hum. Epona the horse remains absent, which for some people is allegedly a deal-breaker. And the meta-discussion might rankle feathers. There are only so many “Oh my god, I remember that!” and “I can’t believe you don’t recognize that!” moments one can take before getting that sinking feeling that you are, indeed, missing out on something.

More importantly, though, it refines the most archaic parts of its predecessors’ gameplay in ways that give the player the most freedom to explore and discover since, perhaps, the original Legend of Zelda on the NES. It’s leaps and bounds ahead of what a (relatively) simple “remake” of A Link to the Past might have been. And it gleefully invites newcomers to learn why so many fans have donned the frumpy green tunic, rather than turning its nose on anyone who hasn’t memorized the multi-game timeline.