I remember a day, back in the late 90s, when I bought a VHS copy of The Rock for my brother’s birthday. It was his favourite movie, if I remember correctly. But I inevitably ended up watching it multiple times. Each time, I gained a little more understanding regarding John Mason’s (Sean Connery) claim, in Scottish burr, that he spent his time in prison “reading philosophy, avoiding gang rape in the showers… though, it’s less of a problem these days. Maybe I’m losing my sex appeal.”

But rewatching The Rock in 2012, a lot struck me about what we expect from a blockbuster. The plotline – a group of elite rogue Marines (led by Ed Harris!) take hostages at Alcatraz prison and threaten to kill hundreds of thousands with stolen chemical weapons unless millions are handed over to them from a Pentagon slush fund that comes from illegal weapons sales – is pretty contained for an action film. If this were made in 2012, it wouldn’t be directed by Michael Bay, it would be directed by Joe Carnahan, it wouldn’t cost $75 million (in 1996 dollars, the actual budget), it would probably cost around $40 million (in 2012 dollars), it wouldn’t run a bloated 136 minutes, it would run a slim 100, and it wouldn’t star Nicolas Cage… actually, it would probably star Nicolas Cage, but he wouldn’t hop in a Ferrari and chase Sean Connery (in a Hummer) through San Francisco in a Ferrari.

But let’s be thankful that he did, because that shit rules. 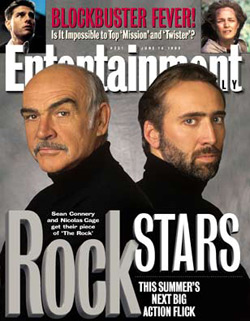 Yes. Nicolas Cage rules. In 1995, Cage made Leaving Las Vegas with experimental director Mike Figgis. In hindsight, Cage’s performance in Las Vegas is a truly horrifying descent into addiction and the idea of suicide by substance abuse, and people recognized. He was an eccentric actor willing to work with weirdo auteurs – the Coen Brothers, David Lynch – and also make weird movies with less well-known filmmakers – like Vampire’s Kiss and Red Rock West. In 1995, he paid his dues and gave one of the performances of his life. For Leaving Las Vegas, he won an award which would give him the freedom to do whatever he wanted. He could be anyone. What did he do?

He said “FUCK YOU, NERDS” and made The Rock. Explosions! Physics-defying action scenes! A Ra-Ra celebration of militarism! Jerry Bruckheimer! Michael Bay! Boom! Pow! Bam! Whoosh! The chance to ask a question “in the name of Zeus’s Butthole!” The chance to call himself a “chemical superfreak!” Nicolas Cage is superfreaky! Little green balls of poisonous gas that melt people’s faces! Bizarrely placed references to Indiana Jones and the Temple of Doom and Pulp Fiction! Money! Lots and lots of money!

How the fuck else is Nic Cage gonna afford them dinosaur heads and Bavarian castles that he so sorely needed to inspire him for his craft? But more than that, Nic Cage gets to be AWESOME on screen. He gets to sit in a chair shirtless with a guitar playing along (badly) to the Beatles before he tells his girlfriend that it would suck if she got pregnant. How else is he gonna get lessons in Badass from James “fucking” Bond himself? How else is he gonna shove a green ball of highly dangerous poison into some crazy Marine’s face before saving himself by stabbing himself in the heart with a giant syringe and then saving 81 hostages by holding garish green flares up as five planes fly by while awesome guitar-laced elevator music plays?

Some people might criticize Cage for choosing to become fucking movie star, but really, even if I like to watch art films and read philosophy, if someone gave me the choice to gain weight and play a fat neurotic writer, or to go to the gym and become an action star who gets laid and kicks ass on screen,  what do you think I would choose? Sure, it’s regrettable that Bay’s style of action is really dated 16 years later, and it kinda sucks that Bay can’t represent a minority without resorting to some offensive comedic stereotype (unless he’s making a Bad Boys movie, and even then…)

The morale of the story is: Cage is a badass. Cage made a badass movie. And if you don’t like it, you’re a hater. Shut up. Also, Quentin Tarantino apparently did a re-write on this film, and that really awkward Elton John “Rocket Man” joke is sooooo his. Just sayin’.