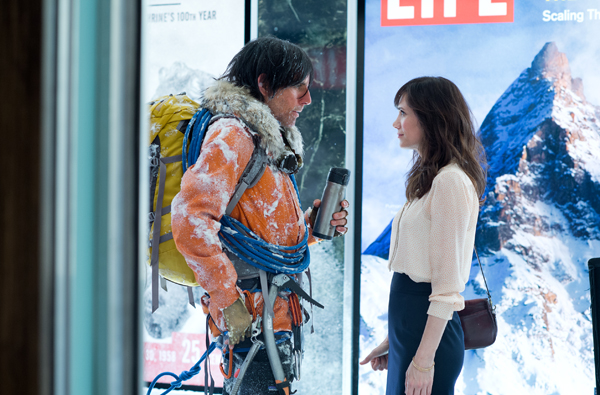 Ben Stiller has had quite the journey throughout his career. Much like his character in The Secret Life of Walter Mitty, Stiller’s directorial efforts have matured as he progresses over time. While not as goofy as his previous two films (Zoolander and Tropic Thunder), The Secret Life of Walter Mitty takes the comedic qualities of his previous two films and adds an emotional and dramatic weight to it. Quite possibly his most well rounded effort, Ben Stiller has managed to surprise yet again, crafting a film that is funny, blends genres and is thoroughly entertaining.

An adaptation of James Thurber’s 1939 short story, Ben Stiller’s Mitty tells the story of lonely daydreamer Walter (Ben Stiller), an employee at Life Magazine’s photo department. When it’s announced that Life magazine will be publishing their final issue, Walter is put in charge of the final cover from famed and elusive photojournalist Sean O’Connell (Sean Penn). When he “misplaces” the extremely important photo, Walter uses clues from the other negatives and goes on a journey across the globe to find the missing photo where his daydreams start to fade and become reality.

Easily his most ambitious project, Stiller gives an impressive performance both in front of and behind the camera. While directing the film would have been a challenge enough, Stiller manages to deliver a film that’s visually stunning, has great character development and blends genres, all while performing a complex lead character. Stiller delivers the film’s comedy and drama with great ease, giving Walter an authentic characteristic that really shows that he poured his heart and soul into the creation of the film.

Stiller’s sincerity is prevalent throughout, and while the narrative is often engaging and beautiful, it’s not quite as deep and meaningful as it thinks it is. Walter’s journey from a basement dwelling employee to the man he ultimately becomes in the film’s final act is fairly obvious and predictable. His clothes drastically change from a buttoned up shirt and tie, to a hoodie and jeans like it’s a major step. He goes from barely able to click on his co-worker and unrequited crush Cheryl’s (Kristen Wiig) eHarmony page to a smooth talking ladies man. Ben Stiller’s passion and sincerity for the project make it enjoyable, but these manifested moments make Walter’s transformation surface level at best.

Walter’s transformation might not be as deep as Stiller intended, but it’s highly entertaining and extremely beautiful. Each of Walter’s daydreams are dazzling and unique, changing genres at the drop of a hat and giving audiences a plethora of different looks and feels. These drastic genre changes never feel disjointed or schizophrenic, and thre’s a wonderful maturity that grows as Walter begins to grow out of his visions and ease back into reality. One moment the film has a goofy Zoolander-esque moment and the next feels like something out of Edgar Wright’s Scott Pilgrim vs. The World with both scenes equally as important and delightful. Cinematographer Stuart Dryburgh shines when the film takes the trip to Iceland capturing beautiful sweeping landscapes and a Papa John’s. It is really stunning with beautiful music choices and a score from Theodore Shapiro.

Mitty is Ben Stiller’s film through and through, but the supporting work in the film has some surprises of its own. Adam Scott (who may be tied with Sharlto Copely in Oldboy for best villainous beard of the year, but here with a better performance to match) does a solid job playing Walter’s new boss Ted Hendricks, an uber-asshole. Sean Penn is used sparingly as photojournalist Sean O’Connell but fits his role extremely well and shares a great scene with Stiller near the end of the film. Patton Oswalt is funny as an eHarmony customer service representative, and Kristen Wiig is very good in a less goofy role than she usually gets, although she seems terribly underused as Walter’s love interest Cheryl, often getting lost within Walter’s narrative.

The film’s heightened use of product placement could also be distracting to many but Stiller manages to integrate these real world goods into the narrative, often poking fun at them and never feeling like a multi-million dollar commercial.

Ultimately, The Secret Life of Walter Mitty shows that Stiller is maturing as a filmmaker. While his sincerity is shown, the film isn’t quite as moving or deep as intended but is an enjoyable ride and character piece on a man who makes his dreams a reality. It doesn’t completely work all the time, but the ambition is there and is certainly worth a watch.