When Metanet’s N++ debuted in July it was deservedly praised for its admirable pursuit of perfection. The maddeningly difficult platformer refines more than a decade of gameplay experimentation into an elegant, precise experience that stands as one of the most challenging (yet rewarding) games of the year.

N++ also contains a staggering amount of content. It boasts upwards of 2,000 single-player levels, as well as a robust multiplayer mode and hundreds of co-op missions that make you want to hate your friends (in a good way). That’s what makes the next sentence so absurd.

If you beat the main game in N++, you’ll only be at 25% completion. The other 75% is locked away behind a kaleidoscopic array of secrets and hidden challenges, making N++ one of the most densely packed games since Super Mario World for the SNES.

“We were hoping it would help N++ to last a lifetime,” said Metanet and co-founder Mare Sheppard, when asked why the game has so many secrets. “N++ is the final and best version of N that will ever exist, so we’re determined to make it last.”

Of course, there’s nothing to indicate that N++ contains so much hidden content, a fact that’s almost as intriguing as the secrets themselves.

“We were inspired by Super Mario World, where so much of the game is hidden in plain sight,” said Sheppard, contrasting the SNES classic with more modern games in which secrets are little more than a locked door with a code hidden somewhere in the level. “That sort of parallel approach is a lot easier to achieve, since it doesn’t involve the game design proper. It only adds a superficial layer on top of the existing game system.”

N++, on the other hand, bakes its secrets directly into the gameplay. After collecting enough gold in the regular game, players will start to see a strange code appearing at the bottom of the screen. It corresponds to a series of hidden objectives. For instance, you might have to beat a stage without collecting any gold, or after activating every single mine. The exit door will change color to indicate when you’ve cleared one of the objectives, though the game never tells you what those objectives are (it opts for a Mastermind-style yes-or-no system), and you won’t be able to complete the mission until you complete every objective in a single run.

Every solo N++ level contains these hidden objectives, which unlock new secret levels and challenge modes once you clear enough of them. It makes for a breathtaking development challenge given the sheer volume of levels already present in N++, though Sheppard insists that the secrets mesh naturally with Metanet’s meticulous design philosophy.

“N++ is all about learning and growing, both as a player and as a person. It may seem like the game is really harsh and difficult, but we saw challenge as an impetus. Secrets require you to take a level you’re already familiar with and figure out a completely different route through it, which can be sort of mind-bending. The secrets require ingenuity and observation, upping the challenge but also the reward.”

Thankfully, it didn’t create too much extra work during development.

“When we added the secret challenges, we only needed to tweak what was there,” said Sheppard. “It was a fun puzzle. How can we take an existing level and add a different route while making the minimum amount of changes and not making them obvious? We replayed and retested until we were satisfied that it all worked and felt right.”

Keeping the lid on one of the game’s most unique selling points was a bit more difficult. The secrets are perhaps one of the coolest aspects of the game, and the players that find them tend to love them (“There’s just something so compelling about solving mysteries, or peeling back the curtain and uncovering a world that’s been there all along,” said Sheppard). Yet Metanet managed to keep the secrets, um, secret throughout its press campaign prior to and during launch.

“We really didn’t want to spoil the surprise,” said Sheppard. “When you finally figure it out, that feeling is so special and so rewarding. We wanted to give players the chance to feel that.”

So far, the reaction has justified the effort.

“The first player we heard about who had found the secrets spent over 100h working through them. This was exactly what we were hoping for,” said Sheppard. “It’s the icing on a cake. People have been delighted and thrilled and excited by the secrets, and we could not be happier with that response!”

That’s not to say that the approach is without its drawbacks. It takes a lot of work to make organic secrets, and N++ is so difficult that most players (present writer included) will never complete all of the core levels, to say nothing of the hidden challenges that require a far greater degree of mastery. 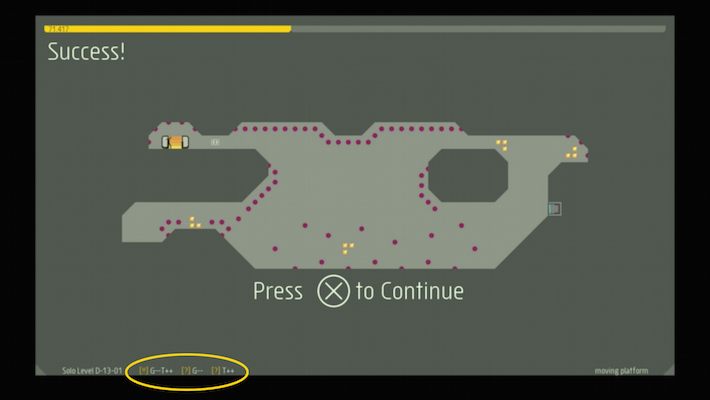 “We built a hidden fortress that only the most intrepid will ever see, which is definitely wistful,” said Sheppard, admitting that it can be a little disappointing to do all that work knowing most players will never see the results. “We took N++ to extremes for the players that have loved it from the start (and complained that every version since 1.4 was too easy). The secrets are dedicated to those players that really crave a challenge. It’s true that not many will see the secrets, but those that do will find lots to love about them, and that’s good enough for us.”

In any case, the secrets are still pretty awesome even if you’ll never possess the skill needed to unlock them for yourself. So many modern games have superficial Easter eggs, but there’s little substance behind the façade. N++ is a throwback to an earlier era, the rare game with something beneath the surface that actually rewards you for overturning every element of the design and exploring through gameplay. It takes an incredible amount of passion and dedication to put that kind of game together, and that’s what makes N++ so special.

“We’re not really sure why this isn’t more common, but we do know that it’s pretty tough to add secrets that work in the context of the game itself,” said Sheppard. “It took us 10 years before we realized how we could do it in N++!”