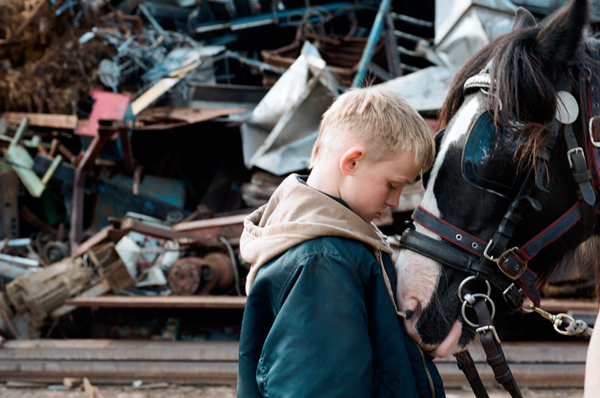 Fictionalized small town poverty has rarely ever felt as visceral and multifaceted as it does in Clio Barnard’s Northern England-set coming of age drama The Selfish Giant. There’s something almost too brutal and bracingly realistic about Barnard’s work here, but that’s totally to her own credit. It’s unflinching, remarkably detailed, and wholly fearless filmmaking that wants nothing to do with twee sentiment or grandstanding life lessons. It’s as tough to take as it is exciting and engaging to watch.

13 year old schoolboy Arbor Fenton (Conner Chapman) isn’t going to be a student for much longer. With a mess of a home life that includes a single mother (Rebecca Manley) and a junkie brother (Elliott Tittensor) and an obvious, often unmedicated hyperactivity disorder, Arbor gets expelled for sticking up for his chronically bullied best friend Swifty (Shaun Thomas) in a schoolyard donnybrook. Thinking he needs to make some cash for both himself and to provide for his mum, Arbor enlists Swity’s help to start stealing and carting around pinched precious metals (particularly copper wiring) by horse and cart for an unethical scrap dealer named Kitten (underrated character actor Sean Gilder) .

Kitten takes a shine to Swifty because he’s generally a good kid, and he knows how to treat a horse, making him a potential jockey and legitimate money maker if he enters the boy into some cart races. He has little time for Arbor, who’s kind of a little shit in spite of his backwards good intentions, often doing whatever he can to somehow sabotage Swifty’s chances of ever being a success on his own. Therein lies the general conflict, but Barnard’s film offers plenty more emotion outside of just the core theme of a youthful friendship splintering over money and pride.

The bleakness of Barnard’s vision won’t be much of a surprise for those familiar with her eye opening and similarly themed 2010 documentary The Arbor, but she clearly has more literary aims in mind here. Not only does the film get its title from an Oscar Wilde penned fairy tale (the similarities to which aren’t really made apparent until towards the end of the film), but it certainly shares Wilde’s two favourite tones: sarcasm and anger. Arbor’s plight feels like a Dickensian scamp trying desperately to lord power over those around him like a young King Lear. Not only is Arbor in desperate need of guidance, but the only people capable of giving him advice are the last people he should be seeking advice from.

Swifty seems to have a more legitimate chance of escaping this suburban scavenger dead end lifestyle. His good nature and adeptness and employing simple common sense leads to two very interesting relationships. His shyness, brains, and natural ability not only create something that Kitten can exploit, but thanks to Gilder’s blend of braggadocio and subtlety, it also seems like the young man reminds him a bit of himself as a wide eyed youngster. On the other hand, Arbor would seemingly prefer that Swifty stay dumb, help him make some quick quid, and then never leave him like his father did and his brother constantly does.

It’s hard to believe that this is the first film for both Chapman and Thomas, especially Chapman who dazzles as a reckless, brash, and foolhardy young man who at only 13 has already had to resort to abject desperation to make ends meet. He’s the perfect embodiment of someone who adults can see as a brat, but one that the viewer doesn’t want to give up on. He’s clearly using his brains (even when foolishly ripping off his boss behind his back), so there’s some hope for his future. He’s even clearly planning for his future or he wouldn’t be making his own life such a living hell. It’s not like the adults around him are helping him out. It’s hard for a young actor to pull off, but Chapman’s portrayal of Arbor is both unlikeable and completely sympathetic. Most adults couldn’t pull that off on their best days.

But it all ultimately comes down to Barnard’s vision of communal poverty as a straight line stretching on to infinity instead of something cyclical with ups and downs. It would be obvious to compare her pessimistic tone to Ken Loach in his heyday, but her work is actually something closer to that of the Dardennes. Her love for these characters in spite of their obvious flaws come into sharp focus far before the film’s melancholic conclusion, but it’s that very love that keeps one interested in sticking with the film. These people have arrived in this community and turned out this way for a reason, and it’s something that’s never held against them. Everyone here is a victim of circumstance in some way, entrapped in a vaguely convenient hell on Earth bordered by nothing but scrap heaps, railways, power stations, and the every present dreary sky that hangs over all their heads.