Nothing is subtle in Russell Crowe’s directorial debut, The Water Diviner, in which a bereaved father travels halfway across the world to bring his deceased sons home after World War I- an offering from Crowe’s home country of Australia.

Crowe himself stars as James Connor, a farmer living in the desolate Australian Outback who prides himself on being able to find water underground by “divining” it. I’m still not entirely sure how it works, but it looked like some sticks are involved. He lives there with his wife and three sons. When war breaks out, he whips his sons into a patriotic fervor, and they merrily rush off to join the army. Tragically, they are sent to the Dardanelles in Turkey, the sight of 1915’s Battle of Gallipoli, where over 250,000 Commonwealth troops were killed, and the Connor boys are among them, dying on the same day. Four years later, James is still grieving, but his wife is inconsolable, blaming James for their deaths. She eventually drowns herself in a nearby reservoir. Having little left, he promises her in death that he will bring his sons home to be buried with their mother. Thus begins a journey that takes him to Istanbul, Gallipoli and Anatolia in search of his children. Along the way, he encounters a haughty young widow, Ayshe, who runs an Istanbul hotel, played by Olga Kurylenko, and her mischievous and charming son, Orhan. Offering the Turkish perspective, she is in denial about the death of her husband at Gallipoli, and is cold to James, who, as an Australian, represents the very people who killed him. In predictable fashion, her feelings warm to him over the course of the film. Meanwhile, James encounters bureaucratic problems trying to get to Gallipoli, and when he finally does, he is shocked by what he finds.

The film isn’t subtle about anything, making it imminently watchable, but not a challenging work. In the oeuvre of war films, it really isn’t saying anything new. There’s vague Australian patriotic rumblings, and the Turkish perspective is interesting, but neither is fully-formed. The heart of the story is really Crowe, the promise he’s made to his wife, and the journey he takes to fulfill it (Avenge me, Maximus!… I mean, James!). The problem is, none of it seems terribly plausible to me. It takes a lot of commitment for James to do what he’s doing, that is to say, travelling 3 weeks on a boat in 1919- and I can assure you, this is not First Class on the Titanic- expecting to find, what exactly? Battlefields are charnel houses, and with 250,000 dead, four years on, how does he imagine he’d find the remains of his sons? The final plot twist requires about twelve leaps of faith for the audience to accept it, but does manage to deliver the emotional payoff the audience is hoping for. 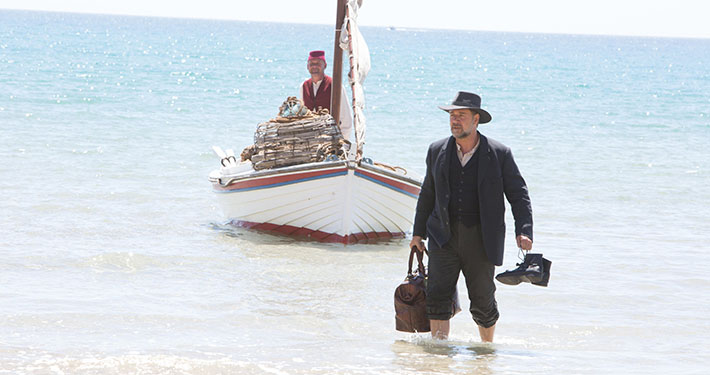 This scenario jumping, from story to story with little reason, necessity or explanation is perhaps the film’s biggest problem. Crowe gets mixed up with Turkish Nationalists, fights Greeks in Anatolia, and has a scuffle with the stiff British officers at the War Office (The Brits on screen are, surprise!, cold and aloof, worse than the officers in The Imitation Game, but somewhere below The Patriot in terms of pure evil.). The film’s action sequences seem ridiculous, but not nearly as ridiculous as the half-baked chaste romance he has with the widow Ayshe. Might I remind you that he’s here to bring back the bones of his sons to Australia? Why is he falling in love over his coffee and beating Greeks over the head with cricket bats? We’re used to Crowe delivering the fight scenes and the “getting the girl” plotline, but in this film, it felt like ticking boxes, and made little sense in context. I feel like there was a meeting in pre-production where Crowe says, “and can I make a promise to someone dead that I’ll do something for them? And can we throw in a hot young model to play my love interest? And can I also fight shit? That’d be great, mate, thanks.” It’s a Russell Crowe vehicle all the way.

But for an audience that might be drawn to a movie such as this (I imagine mostly war-buffs or Crowe fans) there’s still decent stuff here. I can’t deny the entertainment value. Crowe delivers the classic Crowe performance, brooding and cards close to the chest, if a little unemotional given the subject matter. Kurylenko gives us a decent performance as essentially the only woman in the film (the other two women are Connor’s wife who kills herself in the first five minutes, and a very friendly prostitute that lives upstairs at the hotel).  A bright spot is the performance of her son, Orhan, played by Dylan Georgiades, who delivers the funniest lines of the movie. Strange quick cuts, slow motion sequences and nauseating spinning shots puncture the film and detract from the flow. But when the cinematography is done right, it’s actually quite good; the shots of the Anatolian mountains and the Blue Mosque standout as particularly picturesque.

Would I recommend rushing to the theatre to see it? Probably not. I think this is the kind of movie you can watch while doing your taxes or folding your underwear.  If you look away for a few minutes and return to it, you might wonder why Crowe is having candlelit dinners, or why he’s being chased through a market by men with moustaches and fezzes, but never mind. You’re on the Russell train now. Just go with it.