I bought The Witcher 3: Wild Hunt on release day knowing nothing about it except that it’s about a guy with white hair. And maybe witches? But I was in a game rut and craving a new adventure, so I jumped right in with no idea who anyone was or how to pronounce “Geralt.”

I did have some preconceived notions about Wild Hunt that turned out to be well founded, but there are a lot of things about the game that are blowing my mind in the best way possible. I’m not even close to finishing the game so my opinions will probably fluctuate as I continue, but with 22 hours of playtime under my belt I have A Lot Of Thoughts and I must share them with you now.

4 Things That Did Not Surprise Me About Wild Hunt:

Welcome to the Turbo-Male Gaze!

Geralt meets two important women in the first hour or two of the game and in both cut scenes we see their butts before we see their faces. Because of course we do. I don’t know if this is indicative of the entire Witcher franchise, but it’s certainly an illustration of the video game industry as a whole, even in 2015. This is the future. Can’t we meet powerful sorceresses and lady herbalists without seeing them lounging naked or bending over? Hear my plea, video game industry.

Geralt of Rivia is boriiing.

Our hero has scars all over his rippling torso and creepy yet oddly enticing yellow cat eyes, so he’s got that going for him. But he speaks in a grunt, brooding his way across the land, deftly slicing things in half as he goes. Does he have a personality beneath all that manly witcher stuff? I mean… I guess. But there’s nothing about him I can relate to. Broody warrior men are a dime a dozen in the world of RPGs, and Geralt is the sort of skilled and handsome yet ultimately blah hero I’ve come to expect from the genre. If he were a dude IRL he’d be the guy who brews his own beer and always wants to talk about how much he loves bacon. No thanks.

And every one of them is fugly. I’m not trying to rag on anyone’s looks, but couldn’t CD Projekt Red have given us one hot dude to ogle aside from Geralt (if you’re even into that)? The game is filled with stereotypically attractive women for straight men to leer at, yet most of the male NPCs are pale European dudes primarily designed to be nonthreatening when standing next to Geralt. But straight white guy I am not, and neither, I’m certain, is a hefty chunk of the game’s audience. The problem with The Witcher isn’t just its blatant sexism, but also its lack of representation. As a woman, I feel consistently like an outsider in Geralt’s world. Considering it’s a fantasy realm where the rules of our universe don’t always apply, there is literally no reason for all the white bread. Let’s at least get some equal opportunity leering up in here.

Let the darkness consume you.

I knew the game would be dark because my coworker told me it would and he knows things, but dang. It is dark. Wild Hunt is chock full of whispering hillocks, exploding hags, bloody botchlings (don’t ask), creepy bog orphans, slow-mo beheadings, and entrails everywhere. Everyone Geralt comes across is either trying to kill him or a big ol’ Debbie Downer. It’s also a lonely game with a lot of solo exploration, which always puts me in a dreary mood. I play BioWare games for the party banter. The only banter taking place in my Witcher experience is between me and Geralt, which is totally one-sided and involves a lot of swearing because why is this combat so hard to figure out for the love of–!

Maybe it’s my Polish roots, but Wild Hunt has a cool Eastern European mystical folktale vibe that makes it feel fantastical yet achingly real. The music in the game is also some of the best around. It’s heavily influenced by Slavic folk music with some Scottish and Celtic sounds thrown in, at times orchestral and bombastic but for the most part pared down and intimate. The score’s use of legit historic instruments (Byzantine lyra or long-necked lute anyone?) makes me feel like I’m gallivanting through a fully-realized world that might actually have existed in the distant past, which is the ultimate when it comes to gaming experiences. 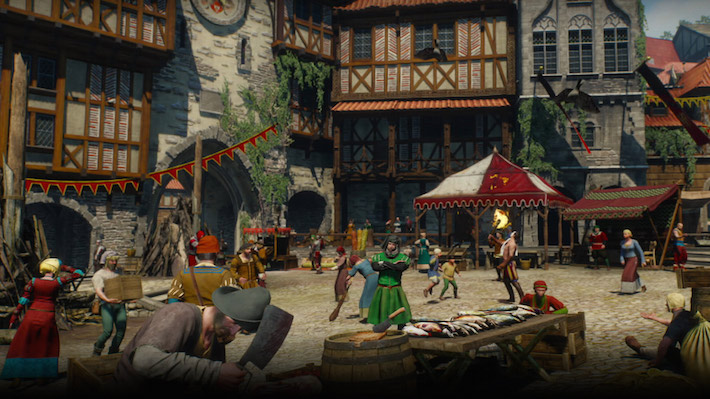 Holy noonwraiths Batman, I get to play as a lady?

And not just any lady, but Cirilla, Geralt’s adopted daughter and a certified badass? I’m still unclear about what’s going on with the plot (did I bother to read a summary of the first two games? Nahhh), but the best moments by far are the ones where, instead of Geralt, I get to slice and stab my way across the land as Ciri, also white-haired and also rocking a metal facial scar. I wish there were more opportunities to play as Ciri. Can this entire game be about Ciri? The Witcher 3: Bye Geralt. It’s Ciri Time.

I almost gave up on Wild Hunt because I felt so grossed out by what felt like a never-ending male gaze party to which I wasn’t invited. But I persevered, and boy howdy am I glad I did. It’s still very much a For Dudes game (fight me on this), but not all women are subjected to low-cut bodices and butt shots. One of the main quests features a girl with practical hair and armor who runs away from her abusive father and joins up with witch hunters to rescue her mother from a trio of orphan-eating crones. She’s my favorite. After Ciri.

Another side quest? My body is ready.

I’m the worst kind of impatient gamer, dismissing side quests in favor of progressing the main story as quickly as possible. Who wants to do another fetch quest when there’s a long-winded cut scene to watch? So I was pleasantly surprised when I discovered that the side quests in Wild Hunt are actually well written, engaging, and fun. Each one is a tiny mystery or a meaningful addition to the game’s mythos, not just some dude inexplicably asking for 15 werewolf spleens. It’s also another excuse to talk to more severely unattractive NPCs. Let me at ’em!