Describe by many who know him as “the most famous guy you’ll never know,” independent British theatre and film producer Michael White might be responsible for a big part of some of your favourite things on stage and screen. He had hands in the creation of The Rocky Horror Picture Show, My Dinner with Andre, Monty Python and the Holy Grail, and Polyester. He mounted some of the most cutting edge productions in London’s stuffy West End that involved the likes of Merce Cunningham, Yoko Ono, and Pina Bausch. He embraced Dadaist anarchy and mainstream theatricality with equal aplomb, singlehandedly leading the repressed London theatre into a golden age during the 60s and 70s.

The difficulty that filmmaker Grace Otto faces in trying to tell White’s story is that despite his participation, the man is stand-offish, shy, and not too keen to talk about himself in any way despite being a noted gadabout and party fixture in the hottest spots around the world. Considering how little White wants to be forthcoming about his past, Otto still manages to craft one heck of a profile about the man by talking to a huge list of luminaries who have worked alongside him: Naomi Watts, Kate Moss, Anna Wintour, John Cleese, Wallace Shawn, Julian Sands, Lorne Michaels, John Waters, and dozens more.

Instead of just trotting out interviews for the sake of star power, Otto does a great job of piecing together an anecdotal history of one of stage and screens biggest unseen influencers. Her filmmaking style is sometimes rough around the edges (especially in moments when Otto can’t decide if she actively wants to be in the film or not), but the research and the follow through are on point. People who like any of the things I listed above will find plenty to like while learning something about someone they probably never knew existed. 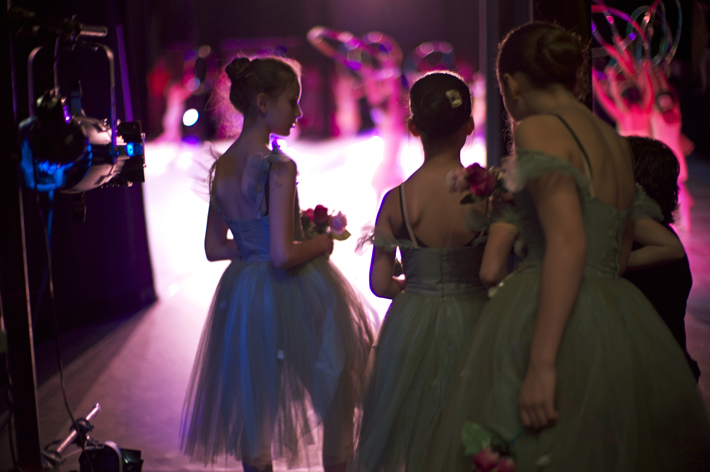 Getting to the Nutcracker

At a time when performing arts documentaries are becoming a dime a dozen and relentlessly clichéd, it’s refreshing to watch a film as studiously intense and thoughtfully crafted as Serene Meshel-Dillman’s look behind the scenes at the Marat Daukayev School of Ballet’s annual production of The Nutcracker.

Instead of dwelling too specifically on stock individual stories – although there is a fair share of adversity to be overcome by some of the young dancers in the 91 days leading up to the first performance – Dillman works hard at showing every moving part of the production in grand detail without skewing things unnecessarily to goose a reaction out of the audience. Even better, she makes sure the film is every bit as entertaining without the relentless tugging of the heartstrings.

Watching these young men and women at various points in their early careers is fascinating enough on its own, but Dillman looks beyond the obvious and looks at the production from a nuts and bolts perspective, as well. Everything from ticket sales to costuming to lighting gets talked about, all of it told from a uniquely human, anecdotal perspective.

By the time the final performance rolls around, the audience isn’t invested in how one or two people will perform, but how the school itself will pull together to put on a show. It makes the viewer more than just a passive observer; a true rarity when it comes to these kinds of behind the scenes performing arts docs that usually involved children.

Evolution of a Criminal

In this month’s Doc Soup selection (screening twice on Wednesday and once on Thursday), filmmaker and NYU graduate Darius Clark Monroe tells a deeply personal story about how one youthful lapse of judgment in a fit of frustration turned him into a felon.

Back when he was only 17 in the early 2000s and coming from a small town, lower middle class family that had fallen on hard times, Darius and a couple of his classmates decided to rob a bank in Stafford, Texas of $140,000 at gunpoint. No one was hurt in the attempt, and Darius honestly thought he was going through with the heist with the best of intentions for his family, but things unravelled quickly and soon the straight A honours student was convicted and sentenced to hard time in one of the harshest prisons in the United States.

Blending stylish recreations with interviews with friends, family, accomplices, prosecutors, and victims he seeks to make amends with, there’s a definite Errol Morris feeling to Monroe’s approach, but it’s told with a considerable amount of personality and attention to detail. Monroe isn’t ducking his past, but dealing with it head on with an eye towards destigmatizing the light most felons (particularly young and black ones) find themselves saddled with for the rest of their lives.

The emotions are big, but restrained, and the dynamics of Monroe’s crime are fascinating in their own right. It’s a beautiful example of someone making the most of a second chance.

The This Film Should Be Played Loud series returns this weekend with a screening of Madonna: Truth or Dare, the risqué 1991 backstage documentary looking at one of the biggest pop divas in the world at the height of her popularity and infamy. Doors open at 8pm on Saturday night for the event, with drink and popcorn specials alongside a pre-show DJ set. The film starts up at 9:30.

Theatre and opera buffs have two reasons to rejoice this weekend. Shakespeare at The Globe presents a screening of the famous theatre’s recent production of Henry V on Saturday at noon. On Sunday at noon, opera fans can catch one of Verdi’s most beloved works, I Due Foscari, presented by the Royal Opera House.

Cinema Politica returns to The Bloor with a pay-what-you-can-donation screening of Gulabi Gang on Tuesday at 6:15pm. Director Nishtha Jain will be in attendance to talk about her look at women rising up against gender violence in India.

Finally, if you watching skateboarding on the big screen is your thing, Plan B skateboards presents a free screening of their latest compilation B True on Monday at 7:00pm.