As I write this, I’m supposed to be playing Soma, the new deep-sea horror explorer from Frictional Games. It’s an intriguing game, and I’m not deliberately trying to avoid it. I just have a hard time plucking up the courage to play because, well, Soma is kind of scary. I’m a coward and I can only handle so much at once.

I recognize that Soma is pretty light as far as horror is concerned. The fact that I’m playing it in the first place is proof enough of that. It’s more suspenseful than it is terrifying, with long stretches in which not much of anything happens. Whenever I do play it, I find that I’m able to make progress at a steady clip and that it’s usually not as scary as I’m afraid it will be when I start.

But for me, this kind of behavior isn’t unusual. When I was younger, I wrote off the horror genre entirely, when I (wrongly) associated it with jump scares and gore that served as its own reason for being. There are movies like that – I still don’t have much patience for gratuitous movies like Hostel – but I’ve fallen in love with horror thanks to a wave of excellent films like The Babadook, You’re Next, and A Girl Walks Home Alone at Night that have taught me to appreciate the artistic value of horror as metaphor and the gut-clenching sensation of physical dread.

I’ve also been making up for lost time, seeking out horror with more eagerness and frequency than at any point in my life. For the first time I can recall I’m looking forward to Halloween for something other than candy and costumes, and with movies like Crimson Peak and plays like Séance, there’s plenty of quality entertainment, even for someone with my delicate sensibilities.

Unfortunately, I still have trouble sitting down to play most horror video games. Soma is my second effort of the year (the first was the sublime P.T.), and I look forward to writing about the game when I’m done. Why doesn’t that make it any easier to take the next few steps? Why does my resolve only stay with me for so long?

In other words, why is it so much harder to stomach horror in video games?

I think it has something to do with the interactive nature of gaming. I’m always grateful for a good horror experience, but it takes a monumental effort to force me through another play session because I still don’t enjoy the process as it’s happening. Being scared is usually more fun in retrospect than it is in the moment, and while I love the intellectual aspect of horror, I’m yet to embrace fear with any anticipation.

That’s why I’ve been so much more enthusiastic for horror cinema. I don’t like fear in movies any more than I do in games, but unless I make an effort to stop the film, the scene will keep playing until it barrels through whatever is making me uncomfortable. With or without me, the film will reach its conclusion and I’ll be able to reflect, which is what I’m looking forward to anyway.

Games, meanwhile, require my input. The first room is usually safe, and nothing bad will happen as long as I never move from that one particular spot. That can make it extraordinarily difficult to marshal the courage needed to advance the story.

The end result is that a lot of my horror games remain unfinished. P.T. is the exception, a game that was short enough to be finished in a single sitting, as well as a game without much in the way of a safe zone. It encouraged you to move forward because whatever was next couldn’t be any worse than what you left behind. Soma has a more methodical pace that can make it easier to play, but I end up dragging my feet whenever the tension starts to build at the end of a two-hour session. I’ll turn off the console with every intention of going back, but it might be awhile if I know I’ll have to deal with a monster as soon as I return. Cinema can’t match the feeling of visceral dread that I get when I’m worried I’m about to die, and that’s why it’s going to take me forever to finish Soma. 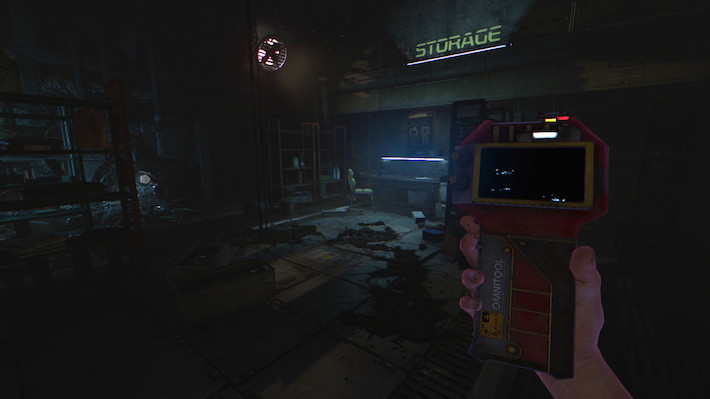 That’s not to say that one medium is better than the other, and it’s worth noting that the need to solve puzzles can often make games less threatening than films (logic has a way of demystifying the atmosphere). I’m merely making an observation that I find curious given my love of games and my newfound love of horror. I want to go back and play more games like Silent Hill, but I don’t like to be vulnerable so I still hesitate to take an active role in my own fear.

Horror games ask us to make ourselves feel weak. After years of power fantasies, that goes against almost every instinct I’ve developed over a lifetime as a gamer.

My aversion to horror games does sort of make me feel like I’m betraying my own medium, but that’s simply what I have to do in order to enjoy the genre at this stage. Hopefully I’ll get past it, because I’m genuinely looking forward to more games like Soma. For now, I’ll just have to enjoy them at a more leisurely pace than I do with film. Horror has virtually limitless artistic possibilities, so at least that gives me plenty of time to savor the dread.