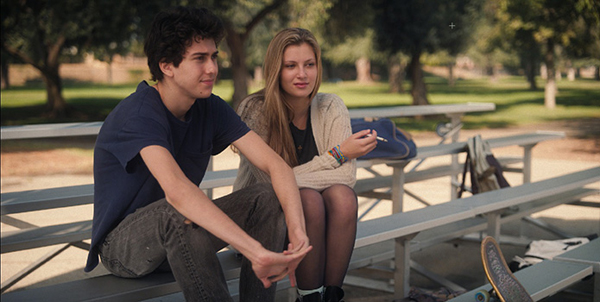 Based on James Franco’s book of short stories, Palo Alto immerses the audiences into the lives and experiences of a group of teenagers (Emma Roberts, Jack Kilmer and Nat Wolff) living in the California town of the same name as they try to determine who they are and what they want to do with their lives.

It doesn’t hurt to have the last name of Coppola, as this is easily the strongest most self assured directorial debut that I have seen in quite some time.  Serving as both writer and director, she adapts this collection of short stories into an earnestly toned and genuine.  There isn’t a single moment that feels contrived or forced, and with an eye for some lovely visuals it unfolds across the screen as a slice of life instead of contrivance or melodrama.

Roberts, Kilmer and Wolff carry this story quite well, with Roberts showing a growing ability to command the screen and carry a film on her own.  Newcomer Kilmer (son of Val, who has a great cameo) delivers a nuanced performance of a troubled young man looking to find himself. Wolff embraces the wild nature of a young man who hasn’t found anything to care about.

It’s an effortless teen story that’s been done before, but past versions don’t ring quite as true as this film does. (Dave Voigt)