TIFF 2013: Tom at the Farm Review - That Shelf Skip to main content 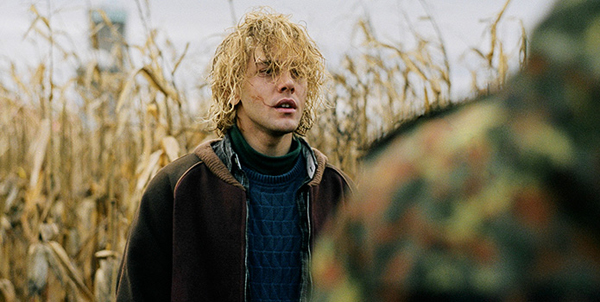 Tom at the Farm

Following up his excellent and highly ambitous Laurence Anyways with something completely different, Dolan delivers a subdued drama and suspense thriller about an outsider, a fracturing family, and lost love, and it’s all set on a farm pretty much in the middle of nowhere. It feels a bit like a lark for the filmmaker, but despite it being his most genre based and probably accessible film to date, it’s another highly accomplished work from the Quebecois filmmaker.

Tom (Dolan) has just lost his lover at the age of 25. He travels out to the country for the funeral and to spend time with the mother and brother who never knew their departed son was gay. Forced into keeping up the ruse of just being a close friend by the psychotic and bullying brother Francis (an exemplary Pierre-Yves Cardinal), Tom finds no real room to grieve. He pities the grieving mother, and while he wants to tell the truth and get out of town, the charismatic and violence prone Francis keeps finding increasingly unhinged ways of stopping Tom’s departure.

A psychologically fascinating look at how closeted homosexuality and the lies surrounding it can make grief even harder to deal with, Dolan also examines with great poignancy how violent homophobia is always masking something darker and sometimes even more insidious. It’s the kind of thriller that hasn’t really been made since the 1960s, and certainly not with this type of subject matter. Dolan delivers typically strong direction, a twisty, thoughtful script, and even a daring physical performance in the lead. If this is what a Dolan B-side looks and sounds like, he still has a heck of a career ahead of him. (Andrew Parker)