One of the most delightfully loony movies to come out of Canada in ages, this assuredly kooky, gorgeous, and surreal take on 1960s values is unlike anything you’ve ever seen. It’s a perfect example of a completely original film that has no comparison and throws everything at the audience including several kitchen sinks. It’s enthralling, endearing, and a heck of a lot of fun.

Stepphy (Jane Levy, giving one hell of a performance) is a budding singer who adores teen idol Bobby Shore (Justin Chatwin, boasting an impossible pompadour). Her attempts to leave town are thwarted somewhat by the unwanted advances of the owner of a purple mist factory (a wonderfully sleazy David Reale) and the desire to take care of her alcoholic father (Peter Stormare). When Bobby and his German assistant breakdown in her small town, Stepphie has a chance to get out of town. That is until that purple mist starts mutating everyone, and oh, hey, did I forget to mention this is a musical? 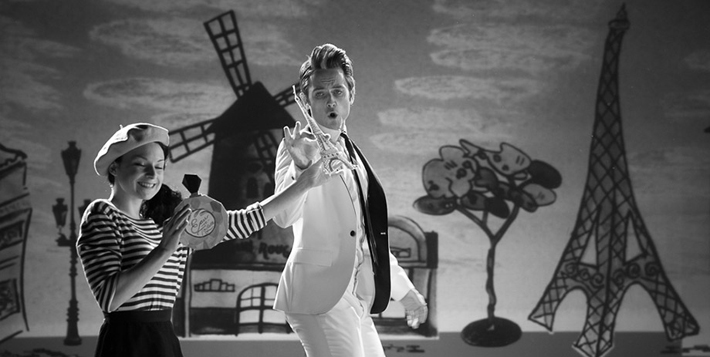 It’s easy to see why first time filmmaker Jeffrey St. Jules spent ten years trying to get this film made. It’s a tough sell, but refined, original, thought out, and made with the utmost care to deliver food for thought and entertainment at the same time. The number of different visual filmmaking styles on display here couldn’t be fit into a capsule, nor could adequate praise for the sharp perceptive script, the top notch production design, and especially the note perfect cast and musical numbers.

I have no real words. Just go see it. (Andrew Parker)