The first program for the brand new Short Cuts International program this year at TIFF looks largely at the perceived rules and attitudes that we as humans aspire/adhere to within social contexts and how easily that bond can be manipulated.

The Warren deals with a nighttime Israeli Defense Force raid into the titular refugee camp, with the forces raiding homes looking for high profile targets. James Adolphus’ US production often seems aping Kathryn Bigelow’s Zero Dark Thirty, but boiled down to only the finale, neglecting to offer any character context. And though the film looks very good, the final shot falls flat instead of carrying the dramatic message Adolphus was probably hoping for.

Discipline starts with a simple everyday concept: a misbehaving child acts up in grocery store causing her father to inappropriately discipline her.  The twist to Christoph Saber’s Swiss entry is that the titular action leads to the complete breakdown of social decorum among the other patrons of the store. The message is simple: even the most inconsequential of social relationships can be blown to bits through misinterpretation and other people’s sense of entitlement while interjecting into other people’s affairs. It effectively finds a way to infuriate the audience enough to make them a part of a greater, important conversation.

Chop My Money features three young wannabe gangsters and the random wanderings of their daily life in the Congo. The kids have some engaging qualities, and Theo Anthony uses the music of Canadian indie rockers Dirty Beaches effectively, but the story it’s too whimsical to make much of an impact given the subject matter.

Playing with Balls is a sexually charged tale involving a group of older lesbians playing poker and a young couple beside them playing tennis. Icelandic filmmaker Nanna Kristín Magnúsdóttir examines the act of same sex sexuality with a refreshing lack of hoopla and fanfare, but the still underlying social aspect of going public with this normality rears its ugly head yet again before the film is through. Strong performances abound from the mainly female cast.

At a scant 3 minutes, American Paul De Silva’s A Spark at Darkest Night is an effective piece of animation that literally ‘illuminates’ the relationship between 2 lampposts  in a park. It’s a magical inclusion that aims to examine similar social contexts but placing them outside of human relationships.

Indie darling Shane Carruth stays in front of the camera for Alberto Roldan’s everything & everything & everything, playing a loner who discovers a magical triangle in his apartment that apparently spits out doorknobs one at a time. The film deals with consumerism and the effect of greed on relationships as Carruth’s Morgan decides to try and monetize his finding and goes way overboard. More of an experiment in style and sound design than a narrative, it looks gorgeous, but any sense of meaning is completely lost along the way.

A Single Body tells the tale of some ambitious friends working in an abattoir cutting meat in order to attempt to fund the big dream of opening their own business. The pair sticks to themselves mostly, but after accident separates the duo, one of the pair goes looking for some vindication. Well-acted and crafted, A Single Body may be the most complete narrative of the program and tells a solid story that could easily have gone on much longer. Sotoris Dounoukos’ work here feels as though it could be a feature presentation in the future. 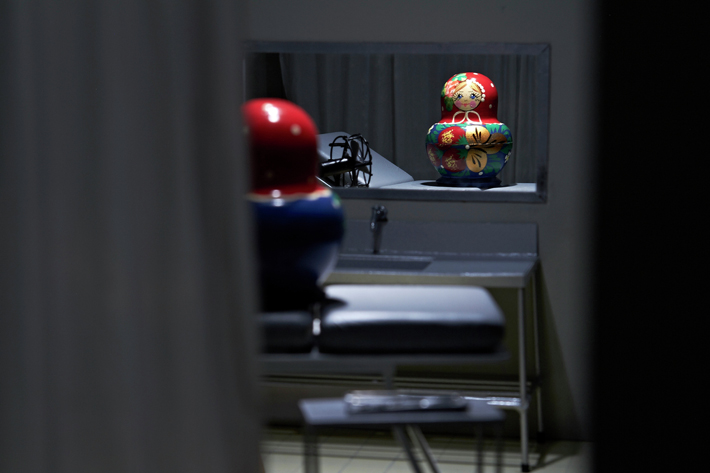 Finally there’s the highlight of the program with co-directors Carolina Markowicz and Fernanda Salloum’s brilliantly animated and hilarious tale of a scale model named Javier, who grows tired of his job working in bad hotel and after a shocking discovery, walks away from it all with comedic results. Tatuapé Mahal Tower is inventive, ingenious and completely original. Who would have thought those little figures standing in an maquette would lead to such an interesting tale of deceit, sexual confusion and sex change hijinks? (Kirk Haviland)