Given that it’s one of the most kinetic, inventive, and manic action films in many years, that’s probably a small price to pay.

Yeah, I’m one of those weak fools that has avoided a life spent playing video games by being incapable of spending five minutes with a first person shooter POV without the need to hurl. This sensitive flower abhors needless shaky cam used to denote “intensity,” finding that most movies are simply desperately in need of a dolly track or, god forbid a tripod.

Yet Hardcore is the antithesis of this slapdash method used by many films to provide a you-are-there aesthetic, if only because it’s clearly so deliberate, and so beautifully executed, that it excites one’s technical nerdery as much as one’s reaction to the shenanigans the characters are going through.

For some the most shocking part of the whole film isn’t that it’s heart-poundingly intense (it is) or that it feels new and inventive (it does), but that it’s at times pretty damn witty with some terrific story beats (no, really). The walk from short film to feature is often a long one, and too often a small idea is needlessly padded to reach the relatively arbitrary running time of 90-ish minutes. Yet here we have a film whose storyline was given at least as much attention as the action setups, managing to cram in a Robocop-like origin story that evolves in quite surprising and engaging ways.

Getting a decent story on a film like this does feel a bit of a bonus, and it’s clear that nobody’s going to seek out this work for an exegesis on the meaning of life, the tumult of love, or the human capacity for betrayal. No, you’re going to watch this to see people’s heads get punched so hard the skulls explode into a shower of bone and blood mist. And for that, too, you’ll be pleased.

Unrelenting is probably a fair word to use when describing Hardcore. From the opening moments we’re hurled, quite literally, in to the point of view of a man who happens to have some of his limbs missing, replaced with handy robotic alternatives. Soon we’re parachuting from some sort of blimp thing, then running about, doing some fancy parkour stuff, shooting, running, fighting, shooting, killing, etc. The “we” in that sentence is important – the film, better than most, really does put you into both the mindset and mayhem surrounding us, the central character. We become inculcated into the story in a wonderfully effective way, making the form of the film’s technical aspects critical to its enjoyment on an aesthetic level. 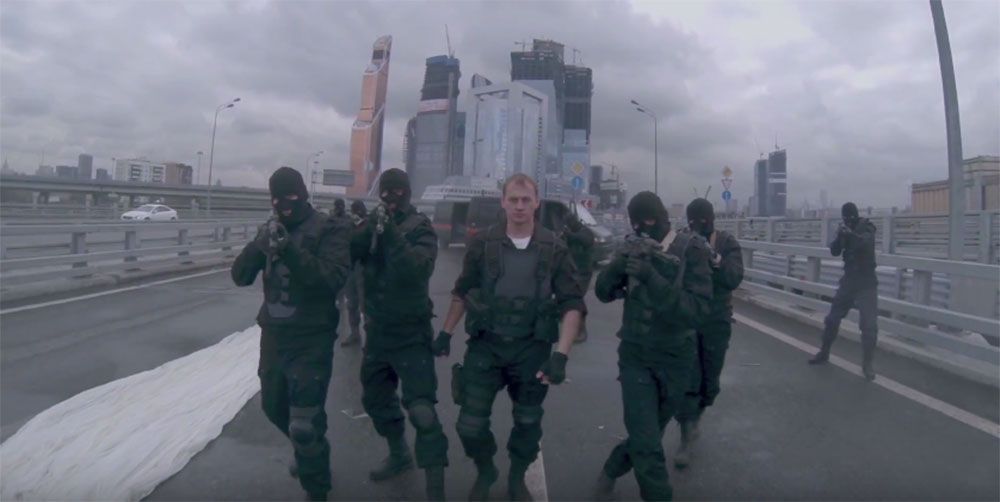 Once again this is no surprise to any gamer, given that the point of those exercises is exactly to make what you are controlling your avatar on screen. For most of the running time the film manages to avoid feeling stale, not simply becoming a series of levels (or bosses) to overcome before moving on to the next. This is done through those narrative elements that perk up ones interest, so that the slaughter remains more poetic than procedural.

The performances from those we get to see, including Will Stewart and Haley Bennett, are perfectly fine, but it’s surely the proliferation of Sharlto Copley’s that will get the most attention. It’s clear he’s having the most fun of all – save for the stunt performers that are bringing our POV character to life.

Director Ilya Naishuller has assembled a remarkable team, pushing the limits of our visual comprehension by maintaining coherence throughout. I had to sit about 40 rows further back than I normally would, and that helped keep my stomach in check. What I got instead of a mouthful of vomit was a brain-full of images that are still being processed hours later.

The ending gets a bit redundant, unfortunately, as we mow down what seems to be hundreds on our way to the big confrontation. There’s nothing in the final reel that matches us riding a motorcycle through a van, or the stomach-churning slide down the side of a building. You can only up the ante so much before it turns into an adrenalized haze, and in the final moments it’s arguable they fall down into that particular crevasse.

Still, that’s complaining about a film of this nature going too far is like kvetching that a musical has too many people singing. It’s raison d’etre is to be over-the-top, it’s DNA infused with flights of fancy never dreamed by the pioneers of cinema. Whether or not Hardcore is the first of many to come, or simply the most effective use of this kind of immersive cinema that we’ve seen to date, time will tell. But what seems incontrovertible is that this film isn’t just terrific, it’s also in some ways important to the legacy and possibilities of cinema. And that, for a film where many, many heads are mashed into smithereens, is a pretty powerful thing for a mad midnight film to be.

Want more TIFF 2015 reviews and interviews? Click the image below to visit our #TIFF15 hub