From October 28 to December 23, there’s a Rainer Fassbinder retrospective at TIFF Lightbox in which the prolific German director’s films are being shown. Fassbinder was certainly a master of the quick turnaround: in fourteen years, he made forty-four films. The story goes that he started filming Veronika Voss in November of 1981, wrapped in December, and it premiered in Berlinale in February of 1982. Some individuals who knew Fassbinder have attributed his enormous workload and destined burnout as leading to his death from an overdose in June 1982 at the young age of thirty-seven.

I’ll be covering several of Fassbinder’s films in this piece and others to come. I’ve watched seven films so far (The Merchant of Four Seasons (1971), The Bitter Tears of Petra von Kant (1972), World on a Wire (1973), Ali: Fear Eats the Soul (1974), Fox and His Friends (1975), Veronika Voss (1981), and Lola (1981) and soon I’ll embark on watching the nearly 16 hour epic Berlin Alexanderplatz (parts 1-3 screen at the Lightbox this Saturday) to add to the developing picture that I’m trying to create of Fassbinder. Two main questions that we will concern ourselves with are: 1) Do Fassbinder’s films have anything to contribute to today’s society? and 2) How can you get the most out of TIFF’s retrospective?

Of the seven films I have seen so far, I would call one a masterpiece (Ali: Fear Eats the Soul), and another an “almost” masterpiece (Veronika Voss). A challenge with watching these films now is that the viewer may be missing political and artistic context, so, for the most part, these films may require some background knowledge. Another challenge with having so many of his films all at once is that there’s not a lot of time to prepare in advance or to process afterwards. Many of Fassbinder’s films are on the melodramatic side and feel padded to this modern viewer. Sometimes characters are not relatable or sympathetic and you end up having to spend more time with them than you’d like, or the outcomes become predictable: heartache and death are almost always a guarantee.

It’s important to keep in mind that Fassbinder was at the crux of the German New Wave, which was borrowing from the French New Wave, but also making do with financial and societal limitations that Germans were forced to deal with at the time. Fassbinder said in interviews that he essentially taught himself everything he knew about filmmaking, since the prior generation was attempting to build up from the ashes of the Nazi studio system (and mostly failed). What new ideas and concepts could German film bring to the forefront that others couldn’t do better? It’s helpful to know that in the same generation as Fassbinder, Wim Wenders and Werner Herzog were also making a names for themselves in German cinema. Wenders and Herzog (and the French Godard) are still prolific today, so it begs the question of what Fassbinder would be doing now.

In James Quandt’s essay Imitations of Life: The Films of Rainer Fassbinder there’s this interesting quote: “Politics and culture, German and international cinema have all changed so drastically in the decades since Fassbinder’s death that one wonders if he would be welcome in this world at all, much less be able to continue making his kind of films.” Fassbinder’s devotion to outsiders (seen in all the films I’ve watched so far) could certainly speak to many of the issues that were prominent during the American election, and which will be around for a long while to come. 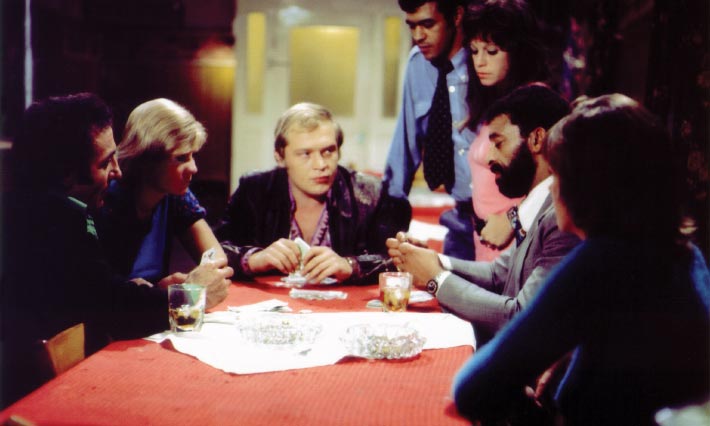 Ali: Fear Eats the Soul (1974) in particular remains depressingly relevant. An elderly widow, Emmi (Brigitte Mira), ends up in a bar on a rainy night and meets an Arab immigrant, nicknamed Ali (El Hedi ben Salem). Before long, they are in love, and must face an intolerant society, as well as the widow’s unsupportive family. This is the film I consider a masterpiece, it would just need a few 9/11 references and it could pass as contemporary commentary. It showcases the variety of injustices the couple are expected to face: everything from being rejected at a store to having their television smashed. Characters talk about “the muscles on an Arab” and their apparent tendency not to bathe. Not only that, the film demonstrates the stress and fatigue one experiences having to surmount constant discrimination every day. The couple are by no means saints, and engage in some passive-aggressive behaviour, but this behaviour is realistically derived from the stressful encounters they have had to bear.

It’s fascinating then that a voice of inclusion and tolerance is Emmi, who was married to a Nazi official and was involved in the regime’s activities. In a wonderful scene reminiscent of The Bicycle Thieves, the couple dine at an extremely exclusive restaurant that Hitler used to frequent, and the widow’s enthusiasm is akin to a commoner finally being able to eat at a famous person’s house – because, really, that is what it is. The couple are poor and can barely pay the bills – yet, when they do go out, they choose this particular place to dine. They struggle with the French on the menu and the widow, speaking for the German-as-a-X-language learner, makes all the classic mistakes one does when eating at a fancy place (I once poured expensive wine in my Coke and had to re-order both). Not only do the couple try to keep up appearances (and fail miserably), Germany is also trying to erase its past and make the haunts of its dictator exclusive establishments.

As evidenced with the previous example, it can be discerned that Fassbinder used his films as allegories to Germany’s then-current concerns. This is apparent in Lola (1981) which concerns itself with the life of a prostitute and dancer (Barbara Sukowa) who finds herself in the middle of a building contract controversy. There’s the sleazeball that’s currently the father of her daughter, Schuckert (Mario Adorf), and there is the new man in town, Von Bohm (Armin Mueller-Stahl). Both men are waging war for both Lola and their building (discussions of which I could not find any enthusiasm for). Lola has little power here, and I lost interest in watching each man attempt to bend everything (including Lola) to his will. I can see how post-WWII Germany would have required extensive rebuilding, and how prostitution and dancing can show the underbelly of a society not really starting with a clean slate, but this particular story dragged on too long for me and did not give enough agency to Lola to make it interesting. What kind of building would Lola create and what kind of country would she run if Trump didn’t own all the buildings?

Fox and His Friends (1975) stars the director himself as Fox, a carnival performer who wins the lottery and finds himself exploited by his lover and his lover’s group of “friends.” This film is notable for showcasing queer life in Germany as if it was no big deal. Having watched Celluloid Closet, I’m appreciative of any queer film that doesn’t make one’s sexuality front and centre (and the rationale for killing oneself), and while this film is a tragedy, the tragedy is not the result of being homosexual. It’s the result of being a rube and trying to buy affection from your distant and manipulative lover, who also runs some kind of printing business (again, I was less enamoured with the industrial goings-on). I didn’t find the protagonist relatable, as he refuses to take responsibility for his actions and characterizes himself as a hard worker. I didn’t see any evidence of him being a hard worker (or any character growth), yet he doesn’t deserve what happens to him during the ending. The final shot is brilliant as it summarizes the pitiful experience Fox has had his whole life. Fun fact: both Mira and Salem have cameos; Salem was wanted for murder so Fassbinder went to Morocco as he does in the film – the two men were lovers.

This piece marks the beginning of my exploration of this fascinating filmmaker. However, I hope that you can see that Fassbinder’s films do have something to say in today’s political climate, and that they are best appreciated with a little context of the conditions Germany was experiencing. If you enjoy the melodramatic genre and its conventions, you should certainly begin your own exploration.