“Today’s exercise is to recognize the world as meaningless and to understand that God did not create a meaningless world. Hold both thoughts as irrefutable and equal, because this is how we must live now, in the final age of man.”

When bad things happen, and they make bad people, retrospect is a blessing. In the present moment, in a meaningless world, a lack of context leaves us fumbling around in the dark. Everything is surprising and brutal because we just don’t know how it’s going to end up affecting us. Yet when we look back on the flat circle of time, we can see the screeching dissonance of individual moments on the record of our lives as music. It will all make sense in the end.

True Detective, after its first amazing season, taught us the rules of living in a meaningless world created by a nihilist named Nic Pizzolatto. The character of Rustin Cohle (Matthew McConaughey), thanks to his retrospective existential monologues, contextualized the brutality of the King in Yellow case, finding meaning in the meaninglessness. He held our hand, thanks to the first season’s clever use of flashback and unreliable narrator. Season two of True Detective is unrelated to Rustin Cohle and the terrible spirals that haunted him, and as such, we the audience have to take up his mantle.

“The Western Book of the Dead” introduces us to a new cast of four dark and gritty protagonists as well as another creepy missing person’s case. Set in the fictional city of Vinci, California, the episode plays it straight with the narrative, save a single flashback, and ends with the event that will serve as the starting point for whatever Pizzolatto’s newest exploration in pessimism has in store.

The linear storytelling of the season two premiere is jarring and simple, but completely changes the show’s tone. Without the framing of scenes with monologues and a nested mystery within a mystery, the plot is made to seem more simple, but that’s not the case. The machinations at play in “Book of the Dead” are just as complex as the bad ass ballad of Rust and Marty, but this time we don’t have a folk philosopher highlighting all the important themes. We’ve graduated, essentially, to the second year of our pop cultural crash course in realist horror.

This is all to say, True Detective season two is off to a difficult start. The plotting gives the impression of being byzantine, the action is brutal and difficult to watch, and there is not a lovable character to be seen. It is a show that is simultaneously hard to watch and demanding of your focused attention – trading in the good faith garnered by its first season to attempt at something even darker.

“Book of the Dead” centers around a missing city manager, Ben Caspere. A man who holds a lot of purse strings (according to his receptionist), Caspere the uniting factor of our four new main characters. As the episode progresses and we learn more about our anti-heroes, we see shots of Ben riding dead in the back seat of a car, driven by a man who keeps a raven mask in the passenger seat. The hour ends with the discovery of Caspere’s body and the convergence of the various personal plots that have been introduced.

Detective Ray Velcoro (Colin Farrell) is a terrible person, made that way by circumstance. Before our story begins, his wife has been raped and carried the resulting child to term. He is divorced and fighting for better custody of his son, who serves as a living reminder of his failures as a husband. Still, the kid is precious to Ray, and after a bully named Aspen Conroy steals and destroys the boy’s new Nikes, Velcoro turns brutal.

Threatening the bully’s name out of his illegitimate son, and getting his address over the police wire, Detective Velcoro beats the living hell out of Apen Conroy’s dad as the bully watches. The violence is ugly and upsetting. These are the actions of a man living in a meaningless world, made angry by it, and desperate to cling on to anything resembling order, even if it means being an agent of chaos.

The dad fight is the most violent moment of the episode, and it stands as an assertion that despite all of the stylistic changes, the heart of True Detective is still intact. This is a show that negates all those bullshit dark and gritty shows that ask viewers to enjoy the violence (Gotham I’m looking at you) and idolize bad characters. The best you can say about the people in this show is that they are, each of them, broken and deserving of pity. They need Rustin Cohle to give them perspective, but we – the apostles of the church of Rust – can only watch and be sad.

Frank Semyon (Vince Vaughan) is hiding behind a mask of legitimacy while taking advantage of the broken Velcoro. A career criminal turned to politics, Semyon is trying to make a lucrative land deal go through involving high speed rail transport and industrial parks. When an investigative journalist becomes poised to unveil corruption behind the major venture, Frank turns to Velcoro as a goon.

The men meet face to face in a bar, making up the episode’s most striking scene, as the mobster and the detective each stare at the weathered face of the other. Some expensive brown liquor says everything you need to know about Velcoro and Semyon. Ray swallows it in gulps and Frank insists it should be savored. Frank can get up and leave, because his life still has meaning, but Velcoro just drowns himself, too cowardly to kill himself but too tortured to live.

Paul Woodrugh (Taylor Kitsch) is also struggling with the void. A highway patrolman with a dark past that’s left him physically scarred and emotionally reserved, Woodrugh is placed on leave after a controversial encounter with an actress wearing an ankle monitor. He caught her driving erratically, she tried to bribe him with sex, he wrote her up for that and he was punished.

Paul’s story lacks clarity, so it’s unclear at first whether he’s being brought up on charges of sexual assault or being reigned in as a man too noble to play the game by letting rich people off the hook. On his return home to his lover, he pops a viagra in the shower so that he can have sex with her, clearing the issue as to whether he abused his power for fleeting gratification after all. This squares Woodrugh as a tortured hero character, but he’s still far from likable.

McAdams’s character highlights another thing that hasn’t changed from last season, and that’s its focus on the male gaze. There was a ton of criticism leveled at True Detective’s first season for its lack of well written female characters, and that can still be said about season two, based on the first episode. It can be said that Bezzerides at least out a woman in 25 percent of the show, but that doesn’t negate the show’s obsession with women who aren’t angry cops as being sex things for the male characters, or footnotes in their biographies.

Bezzerides is turned onto a missing person’s case when delivering a foreclosure notice, and following a lead she visits her father’s cult, the Panticapaeum Institute. Her father (David Morse) is as close to a Rustin Cohle as we get in “Book of the Dead” as he doles out advice on how to live in a meaningless world. Sadly for our protagonists, the only person he gets a chance to influence, Bezzerides will not listen to his doomsday hippie paradoxes. We’re left to watch as these poor souls embark down a path into the darkness of the human condition without Matthew McConaughey as a guide. 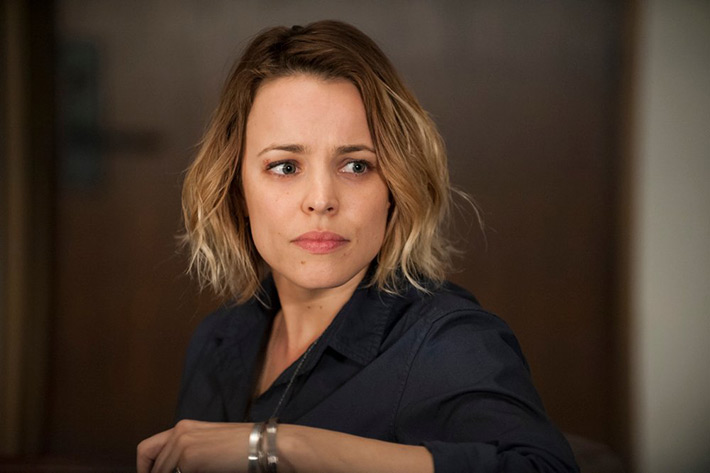 The four character plotlines converge when Woodrugh goes on a nighttime motorcycle ride and, after reaching top speed and turning off his headlights, he beholds the night sky. Coming to his senses at a highway rest stop, he discovers the dead, eyeless body of Ben Caspere. Not on duty, he calls 911. This brings Bezzerides as a first responder and Velcoro as the detective originally assigned to Caspere’s case. Frank isn’t at the scene, but Caspere’s absence from his high speed rail pitch implicates his presence by way of personal investment.

The characters exchange glances, almost knowingly, and the camera pulls out to a wide shot of California. It’s a little ham handed, and highlights the last key change between seasons: the absence of Cary Joji Fukunaga. “Book of the Dead” is less beautiful than True Detective season one, and while there are occasional visual callbacks (the starry night sky being the big one), Fukunaga’s absence is felt.

The “The Western Book of the Dead” is underwhelming by necessity of being the first chapter in a new story, told by a new creative team. Though True Detective is still plagued by problems from season one, thematically it’s still on point. Rustin Cohle taught us all how to deal with the nihilistic worlds of Nic Pizzolatto, and with his absence we get to fill that role, making our beer-can-people as we watch these new characters struggle to find the light in the darkness. A case study in a meaningless life, season two is only one episode old and it’s already evil as shit. Hopefully we can use our season one education to hear the music in all its screaming.

– Speaking of music, that’s Lera Lynn playing music in the bar scene. She performed the song used in season two’s initial trailer, “The Only Thing Worth Fighting For”.

– So, is the episode’s title a reference to the book Ray finds on Caspere’s desk? Or maybe it’s just evoking the death hippie vibe from Caspere’s killer and Bezzerides’s dad.

– And the big question for all you viewers out there: is the Ben Caspere case as immediately intriguing to you as the Yellow King conundrum? Sure, it lacks the overt Lovecraft references, but it’s still deliciously cult-ish. Let me know in the comments.